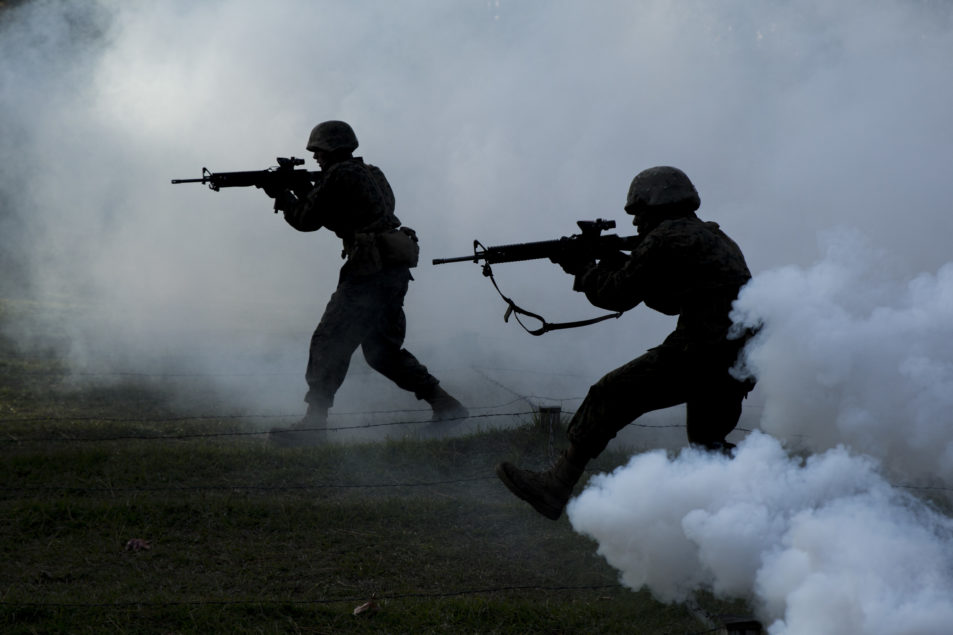 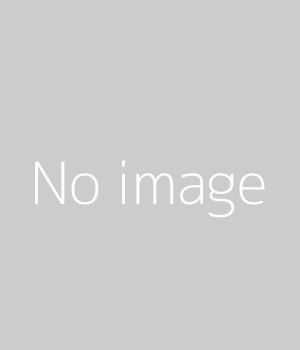 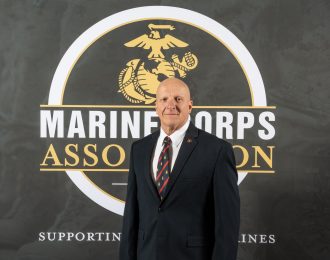 In June 1992, Captain Chiarotti was selected to attend the Amphibious Warfare School, Quantico, Virginia. Upon graduation, he was assigned to Camp Pendleton, California for duty with 7th Motor Transport Battalion, 1st Force Service Support Group as Commander of both Alpha and Headquarters and Service Company. Additionally, he served as Operations Officer, Combat Service Support Detachment 17. Upon transferring to MEU Service Support Group (MSSG) 15, he was assigned as the Operations Officer and subsequently deployed with the 15th Marine Expeditionary Unit (Special Operations Capable) (MEU (SOC)). He deployed in support of WestPac in 1995.

In 1996, he was assigned to Combat Service Support Detachment (CSSD) 36, Iwakuni, Japan, for duties as Executive Officer. In June 1999, he was selected to attend the Naval Command and Staff College, Newport, Rhode Island. Following graduation in June 2000, Major Chiarotti was assigned to Marine Corps Forces, Europe, Stuttgart, Germany as the Southern Region Logistics Plans Officer. In August 2001, Major Chiarotti reported for duty as Plans Officer, Plans and Policy Division, Logistics and Security Directorate, Headquarters, U.S. European Command. Following the events of September 11, 2001, he served as Watch Officer, Crisis Action Team, European Theater Command and Control Center. Subsequently, he served as the Branch Chief, Logistics Support Operation, responsible for the planning and execution of logistics support operations in support of OPERATION ENDURING FREEDOM and OPERATION IRAQI FREEDOM from within the European area of responsibility.

In May 2003, Lieutenant Colonel Chiarotti was assigned to 2d Force Service Support Group. He deployed as the Officer-in-Charge, Transport Support Detachment, Special Purpose Marine Air-Ground Task Force, Camp Fox, Kuwait. Returning in November 2003, he assumed duties as Deputy, Assistant Chief of Staff, G-3. In March 2004, he deployed in support of OPERATION SECURE TOMORROW as the Director for Logistics, Combined Joint Task Force, Haiti. Returning from Haiti in July 2004, he assumed command of MSSG-22 and was deployed in support of Revised Combined Arms Exercises 3 through 14, Camp Wilson, Twenty-nine Palms, California from September 2004 to March 2005. In May of 2005, MSSG-22 became part of 22d MEU (SOC). Lieutenant Colonel Chiarotti deployed MSSG-22 in support of OPERATION IRAQI FREEDOM in support of the 22d MEU (SOC).

He was selected for and successfully completed a Fellowship at Smeal School of Business, Pennsylvania State University, State College, Pennsylvania, and was subsequently transferred to Okinawa, Japan on 7 July 2007, where he assumed command of Combat Logistics Regiment 3, 3d Marine Logistics Group, III Marine Expeditionary Force (MEF). Following this assignment, he was assigned as the Assistant Chief of Staff, G-3 until his reassignment to United States Central Command as Chief of Staff, Logistics Directorate.

In August of 2011, Brigadier General Chiarotti was assigned to U.S. Marine Corps Forces, Europe and U.S. Marine Corps Forces, Africa as Deputy Commander. Brigadier General Chiarotti was subsequently assigned as the Deputy, J-5 Plans and Strategy and finally the Director, J-5 Plans, Strategy and Programs for U.S. Africa Command until his assignment to II MEF as Commanding General, 2d Marine Logistics Group from June 2014 to June 2016. 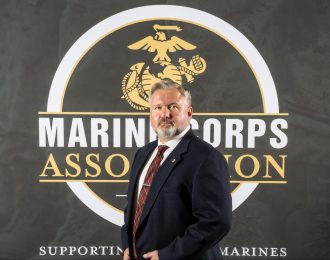 A native of Brooklyn NY and graduate of Hamilton College, Clinton NY, Col Woodbridge was commissioned a 2nd Lt of Marines through the PLC program in 1987, and his first assignment was as a rifle platoon commander in 1st Battalion 7th Marines.  He then served as the battalion’s Heavy Machinegun platoon commander during Operations DESERT SHIELD and DESERT STORM.

As a major he served as the Plans Officer at the Warfighting Development Integration Division of MCCDC and as the Aide-de-camp to the Commanding General of MCCDC.  Following the School of Advanced Warfighting (SAW) in 2001 he served as an instructor and the Exercise Design branch head with the MAGTF Staff Training Program.

In January of 2003 he deployed as part of the staff of Marine Forces Central Command (forward) in support of OEF/OIF, and in August 2003 he took command of 1st Battalion 7th Marines in Iraq, serving as the Coalition’s Military Governor for Najaf Province.  From August 2004 to March 2005 he led the battalion through a second deployment to Iraq commanding Task Force 1/7 in the Al Qaim area of western Al Anbar Province.

From June 2008 to June 2011 he served as the Chief of the Joint Training Division of USJFCOM’s Joint Warfighting Center providing Deployable Training Teams in support of Joint Exercises for every Combatant Commander worldwide.  Col Woodbridge personally lead teams focused on the CENTCOM, PACOM, and EUCOM AORs as well as the Korean Theater.

From 2011 to August 2014, Colonel Woodbridge served as the Director of Plans, Operations and Policy G-3/5/7 for Marine Corps Training and Education Command.  His last assignment was as the Deputy Director Capabilities Development Directorate, Combat Development and Integration.  He retired effective 1 Nov 2015 and is currently the Editor of the Marine Corps Gazette.

Vice President of Strategic Communications and Editor of Leatherneck 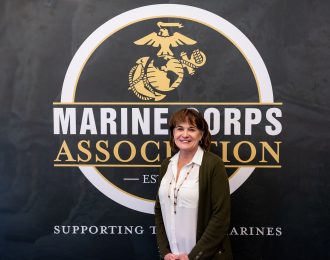 Colonel Reinwald was commissioned through the NROTC at Penn State and has a bachelor’s degree in political science. Initially assigned as a supply officer, she served as an adjutant and manpower officer for the rest of her career.  Her assignments include duty in 2nd Force Service Support Group; 6th Marine Corps District; 3rd Marine Division; Marine Corps Combat Development Command; Manpower & Reserve Affairs; Marine Corps Command and Staff College; Command, Control, Communications and Computers Department, Headquarters Marine Corps; Marine Forces Command, and the Department of Defense Sexual Assault Prevention and Response Office.  She has commanded at the company level and later served as the Commanding Officer, Personnel Administration School.

She is a graduate of the Amphibious Warfare School (non-resident), the Marine Corps Command and Staff College, and the Marine Corps War College from which she received a master’s degree in Strategic Studies. She retired from active duty in February 2014 and assumed the duties as Leatherneck editor. She later assumed the additional duties as the MCA’s Director of Strategic Communications in 2016 and as the Director of Retail in 2021. 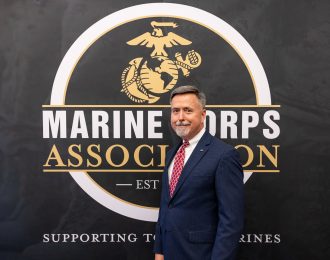 A career infantry officer, Colonel Mundy was fortunate to lead Marines while serving in all three active Marine Divisions as a member of the 1st, 2d, 3d, and 4th Marine Regiments.  He has served in combat with 3d Battalion, 3d Marines in Operations Desert Shield and Desert Storm; commanded 3d Battalion, 2d Marines in Operation Iraqi Freedom, Al Anbar Province, Iraq; and with II MEF (Fwd) in Operation Enduring Freedom, Helmand Province, Afghanistan.  He has held numerous staff billets with Marine Corps organizations and a Joint command, primarily in plans and operations officer assignments.  He was also fortunate to attend several Marine Corps and sister service schools. He commanded the School of Infantry-East, and his final full tour in the Marine Corps was as the Chief of Staff, Marine Corps Combat Development Command.

Colonel Mundy was commissioned through the NROTC at Auburn University and has a bachelor’s degree in History.  He holds a master’s degree in Human Resources Development from Webster University, as well as master’s degrees in operational and strategic planning from the U.S. Army School of Advanced Military Studies and Joint Advanced Warfighting School.  He retired from active duty in January, 2017.

Vice President of Events and Advertising 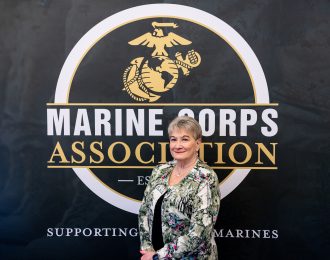 LeeAnn Mitchell joined MCA in February 2006 to assist with membership acquisition and retention, after spending 23 years in the newspaper industry where she headed up marketing, circulation, advertising, and events departments for companies including USA Today, The New York Times, The Chicago Sun-Times, Stars and Stripes, and the Omaha World-Herald.  While working as the Marketing and Circulation Director for Montgomery Newspapers, LeeAnn was responsible for managing Philadelphia’s “Baby & Toddler Expo” which had over 25,000 people attend over a 3-day period.

Her experience as a consultant for digital publications assisted with the selection and introduction of electronic editions of Leatherneck and the Marine Corps Gazette for our MCA members.

In January 2007, LeeAnn also became the Marketing and Sponsorship/Events Director for MCA, which included overseeing the first MCA Annual Dinner whose speaker was Secretary of Defense Robert M. Gates.  She now oversees between 15 and 19 events annually ranging from the Combat Development Awards, Ground Awards, Information Awards, Installations & Logistics Awards, M&RA Awards, and Acquisition Awards Dinners to the Okinawa Professional Dinner and others throughout CONUS.

Due to her extensive experience in fundraising for Newspaper in Education programs and also her experience with the University of College Office of Annual Giving, in 2009, LeeAnn assumed additional responsibilities helping to launch the Marine Corps Association Foundation, where she directed the development activities and Foundation event programs until 2010.

Then LeeAnn continued her work in Sponsorship Sales and Events, adding advertising for the magazines to her repertoire in 2018.  In 2021, during an internal reorganization, LeeAnn was named Vice President of Events, Sponsorships and Advertising.

A native of Iowa, LeeAnn is a graduate of the University of Arizona, Tucson, with a Bachelor’s Degree in Public Administration. 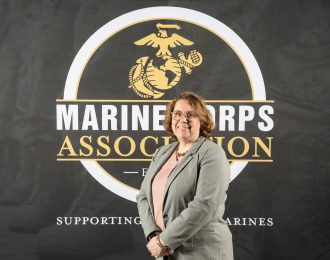 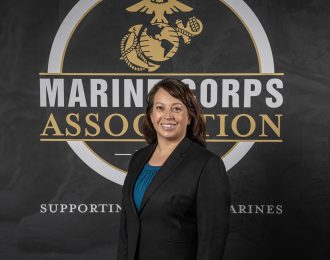 Marta is currently serving as the Director of National Military Association (NMA) Engagement and Expositions.  Prior to her current position, she has served in both the military and civilian sectors specializing in curriculum and content development, executive event management, project management, and leadership coaching. She recently retired from the Marine Corps Reserves after 22 years of service in the logistics field.

As a veteran and spouse of an active-duty Marine, Marta is passionate about programs and initiatives that support and promote the well-being, quality of life, professional development, and economic opportunity of military spouses, veterans, and their families.

Marta is a graduate of the University of Virginia and Marine Corps Command and Staff College from which she holds a Bachelor of Arts in Philosophy and Master of Military Studies, respectively.  She currently resides in Quantico, Virginia with her husband Farrell and four sons Peter, Daniel, Brendan, and Joey. 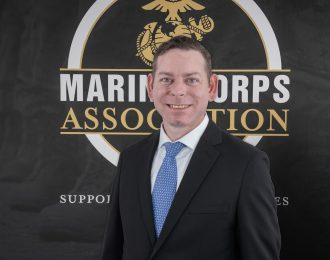