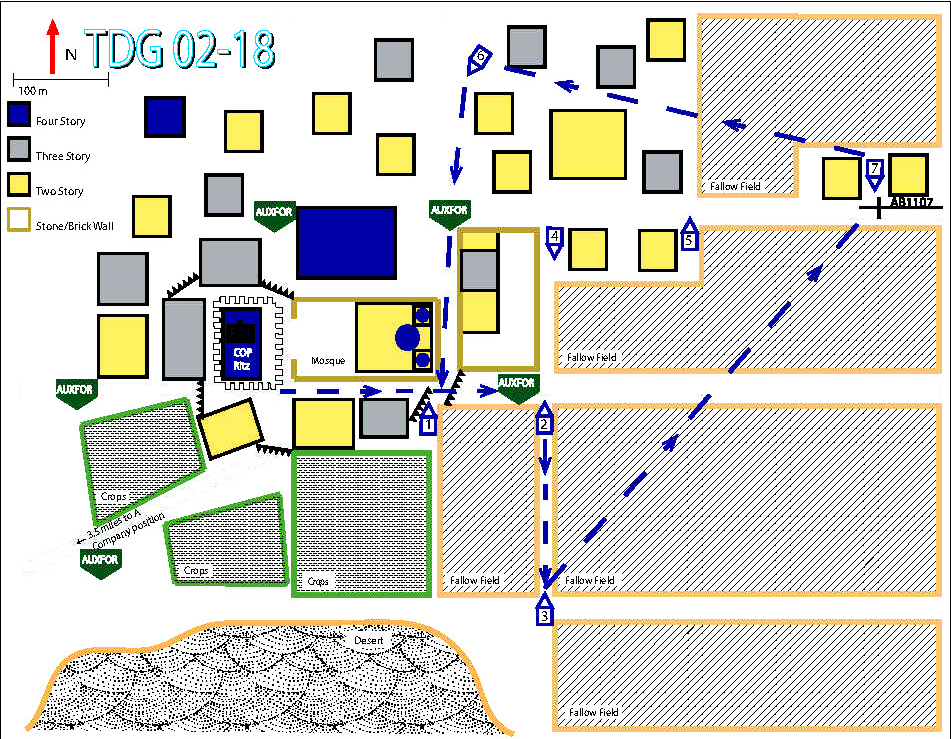 You are the squad leader of 3d Squad, 2d Platoon, A Company, 1st Battalion, 1st Marines. Your squad has been ordered to conduct a day security patrol east of the company position at COP (combat outpost) Ritz. Your designated patrol route (depicted on Figure 1) will take you out past the Al Mumeet Mosque and southeast to the far side of several abandoned farms and fields thickly overgrown with shoulder-high sawgrass and upland cane. You and your Marines have been on patrol both day and night, approximately every 48 to 72 hours, ever since the company occupied COP Ritz. You and your team leaders are highly experienced in patrolling the congested area surrounding the COP and have been in more firefights than you can remember. On several occasions, you have had to call in the Company’s quick reaction force (QRF) to reinforce your patrol after making contact.

Your mission is: No later than 0900, depart friendly lines and conduct a security patrol along the designated route east of the Al Mumeet Mosque neighborhood in order to disrupt any anti-MUGA forces in the area and demonstrate a MUGA/CJTF presence. Mission has priority.

You designate your first fire team leader, LCpl Santeira, as your assistant patrol leader and LCpl Sharpe as your radio operator.

For today’s patrol, you have 10 combat effective Marines including yourself, and the following attachments for the patrol make a total of 20 men.

Fire support remains limited to the battalion’s organic mortars and Marine rotary-wing CAS on alert +15 at the battalion FOB. There is one registered target at Checkpoint Seven: AB1107. The Al Mumeet Mosque is established in all Aviation Special Instructions (SPINS) as the center of a 200m by 200m rotary-wing attack position, “AP Snake.”

The battalion’s alert +5 section of medevac helicopters has a dedicated radio net. Response time is less than 10 minutes, and the JTF Level III treatment facility is 45 minutes flight time.

Your communications are limited to unencrypted, VHF and UHF, voice-only radios. You are monitoring and reporting checkpoints to mark the patrol’s progress on the company tactical net.

How do you organize your patrol for movement? Where do you assign the machine-gun teams and all-around security?

The patrol exits the southeast corner of COP Ritz and departs friendly lines at Checkpoint One. You move past the AUXFOR vehicle checkpoint east of Checkpoint One without incident. You count ten “oxfords” sitting in the shade, chewing khat and talking. Several are talking on local cell phones.

The patrol continues past Checkpoints Two and Three and turns sharply northeast into the tall grass of a fallow field. In about 250 meters, your forward security reaches the road leading east from the mosque.

How does your patrol treat this linear danger area? Do you sprint across, deliberately establish security before crossing, or do something else?

As half of your patrol makes it across the road, you start taking steady small-arms fire from somewhere north or northwest of your positon. No one is hit, but the fire does not cease as everyone takes cover. What do you do?

Do you continue the mission along the designated patrol route, attempt to break contact and consolidate the patrol south of the road, or change the mission to locate and close with whoever is firing on the patrol? Do you do something completely different? What reports do you radio to the company?