This TDG is a continuation of the scenario that began with TDG 02-17 in the February 2017 edition. For additional information on the current situation, refer to TDGs 02-18 and 03-18: “The Routine Patrol,” Parts I and II, in the February and March 2018 editions respectively. 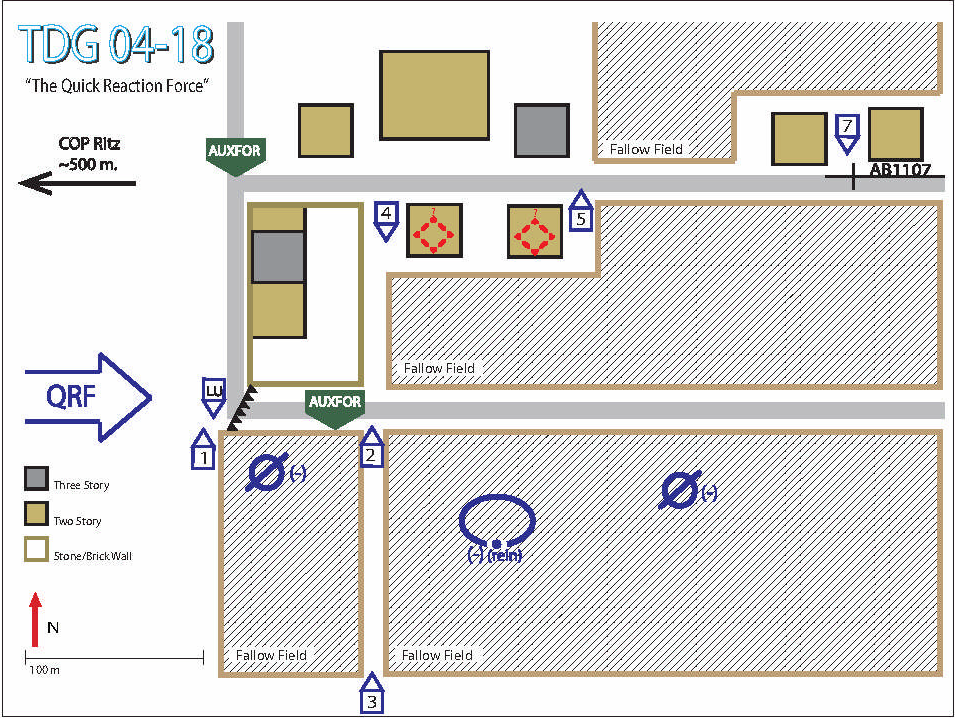 You are the platoon commander of Second Platoon, A Company, 1st Battalion, 1st Marines. Since your 3d squad is conducting a day security patrol, the remainder of your reinforced platoon is currently “standing by” on a plus-fifteen-minute alert as the Company’s quick reaction force (QRF). This means your company commander expects you be able to depart friendly lines with your force in fifteen minutes or less from the time support is requested.

In addition to your two remaining squads, you are reinforced with one machine-gun section (two M240B machine guns), one JTAC-trained Marine, and a Corpsman. The QRF also includes two squads of MUGA Commandos and two Commando “anti-tank/assault teams” of two men each, armed with Type 69 rocket propelled grenade launchers and a mix of anti-personnel and anti-armor rounds. All close air support, fire support, and medevac assets remain the same. Your communications are still limited, unencrypted VHF/UHF voice-only radios.

Approximately 25 minutes ago, steady small arms fire was heard coming from the area east of the Al Mumeet Mosque, and ten minutes ago, your patrol reported in that they were taking fire from a building or buildings in the vicinity of checkpoints four and five and requested support. They have no casualties and have consolidated in covered and concealed positions in the fallow fields south of the road running east–west from checkpoint two. The patrol also reports an AUXFOR vehicle checkpoint east of checkpoint one manned by about ten “Oxfords.” These AUXFOR are clearly agitated and showing the effects of a morning’s khat use, but they remain covered and have started firing their weapons in the general direction of checkpoints four and five.

As you rapidly supervise to ensure the QRF is prepared to depart COP Ritz, your company commander directs you to link up with the patrol in the vicinity of checkpoint one, assess the situation, report back, and, on order, attack to clear the buildings between checkpoints four and five. You have five minutes remaining to complete your initial plan and issue a fragmentary order (FRAGO) to the QRF for link-up with the patrol and execution of your on-order mission.

With a time limit of five minutes, write the FRAGO and the rationale for your solution, and also provide a graphic for your plan. Submit your solutions by email to gazette@mca-marines.org or to the Marine Corps Gazette, TDG 04-18, Box 1775, Quantico, VA 22134. The Gazette will publish solutions in an upcoming issue.