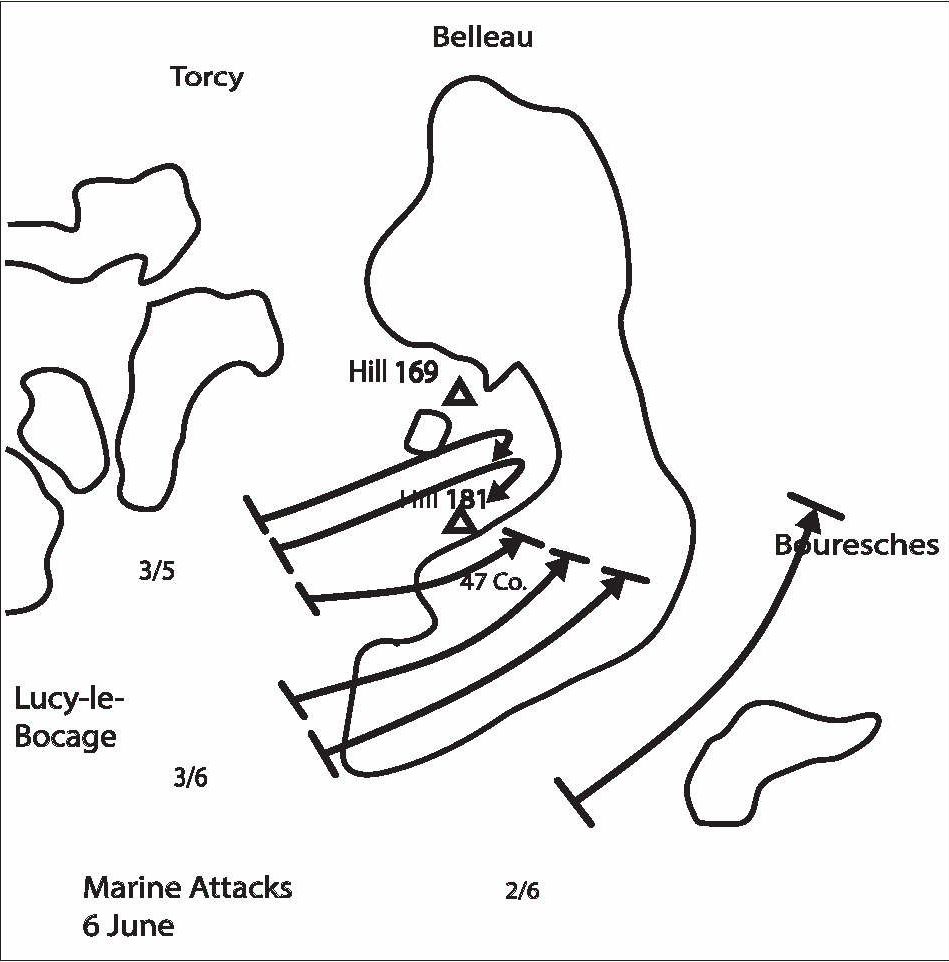 You are the commander of the 4th Marine Brigade, 2nd U.S. Division. It is early on 9 June 1918. Your mission, assigned by the commander of the 2nd Division, is to “clear Belleau Wood on 11 June 1918.” This is a matter of particular importance to higher echelons of command, as the majority of the American public thinks that the Marines have already cleared Belleau Wood.

Probably because of the level of attention focused on Belleau Wood worldwide, the French have agreed to support your attack with quite a large amount of artillery fire, namely 50 batteries worth. They are also prepared to fire off a large amount of ammunition, namely 6,000 rounds of 155mm shells and 28,000 rounds of 75mm shells. You may set the targets and priorities for this fire however you think would best support your attack.

On 6 June, two of your battalions attacked the wood, which was believed, at the time, to be unoccupied. 3d Battalion, 6th Marines (3/6) ran into a strongly posted German line a couple of hundred yards from the southern edge of the wood. Machine guns with intersecting fields of fire prevented any further progress, even though 3/6 took over 40 percent casualties. There were many large boulders along the German line; the Germans, in many cases, posted their machine guns behind the boulders, thereby securing protection from fire from the front while firing the machine guns at an angle to the front. These arcs of fire intersected. No rifle grenades were available during these attacks, a fact that the Marines have bitterly complained about. It was noted during this fight that there were several relatively covered routes into the southern edge of the woods, working off the gully that runs between Lucy-le-Bocage and Bouresches.

3d Battalion, 5th Marines also attacked on 6 June, across a wheat field. (See map.) They received heavy fire on their left flank from behind a knoll on the western side of the wood, Hill 169, and also from the tree line directly to their front and right flank. Only the company of 3/5 farthest to the right, the 47th, made it into the woods relatively intact. That was because a small ridgeline protected them to some extent from the fire coming from the left. Survivors of the 47th also reported abandoning their original formation, four rows of skirmishers spaced five yards apart with rifles at high port, in favor of “spreading out in the wheat and taking the old formations we had used so many times in the cane fields of Santo Domingo.”

You have available for the attack two infantry battalions, 2/5 (75 percent strength), under Maj Frederick Wise, and 1/6, under Maj John Hughes (“Johnny the Hard”). Also available is the 6th Machine-Gun Battalion (four companies, each with sixteen heavy machine guns (Hotchkiss, Model 1914), led by Maj Edward Cole. The attack on Belleau Wood, while of great importance, is part of a larger Allied counteroffensive against the German offensive originating at the Aisne River. The rest of your Brigade is required to hold Hill 142 and the village of Bouresches, localities gained in the 6 June attacks.

Currently all American units have been pulled out of the woods, with the exception of the 80th Company of 3/6, located in the extreme southwest corner of the Wood (northeast of Lucy-le-Bocage). This has been done to give free rein to the action of the artillery. There is no detailed information on German dispositions, but it may be assumed they hold the wood in approximately regimental strength. Because of the small size of the battlefield and the amount of time available, the attack units can approach the wood from any direction south of the Lucy-Bouresches road or west of the Lucy-Torcy road.

BG Harbord, what are your orders?

Quickly formulate your plans and issue your orders. Provide a brief discussion of the rationale behind your actions. Submit your solution by email to gazette@mca-marines.org or to the Marine Corps Gazette, TDG 06-18, Box 1775, Quantico, VA 22134. The Gazette will publish solutions in an upcoming issue.