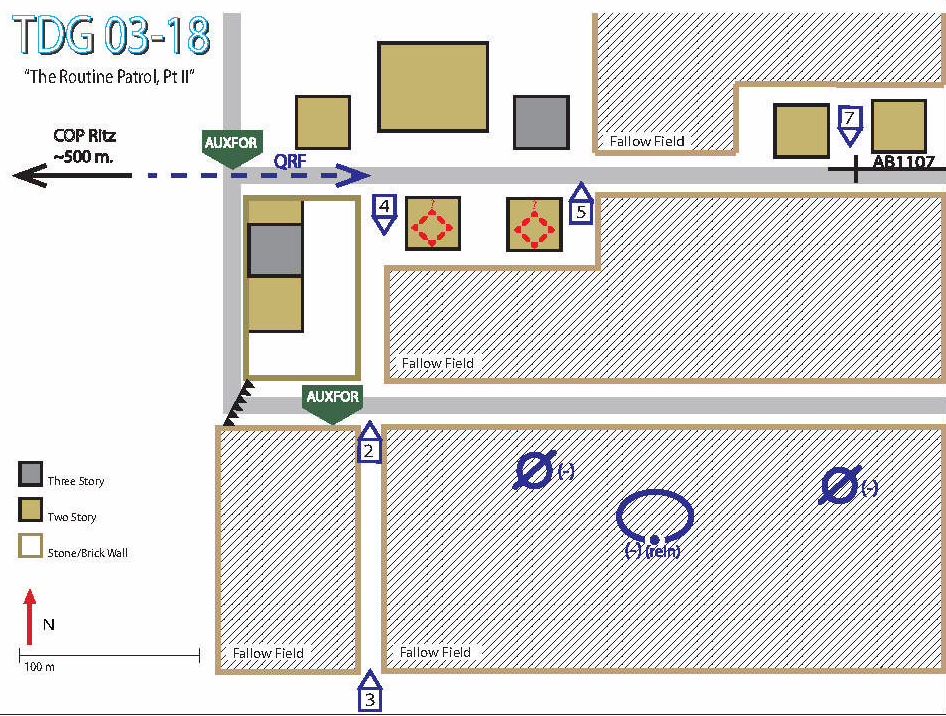 You are the squad leader of 3d Squad, 2d Platoon, A Company, 1st Battalion, 1st Marines. You have been leading a day security patrol east of the company positon at COP Ritz past the Al Mumeet Mosque and southeast of several abandoned farms and fields thickly overgrown with shoulder-high sawgrass and upland cane.

After exiting the southeast corner of COP Ritz and departing friendly lines at Checkpoint One, the patrol moved past the AUXFOR (“oxfords”) vehicle checkpoint east of Checkpoint One without incident. You observed the AUXFOR sitting in the shade, chewing khat and talking. Several were talking on local cell phones.

After passing Checkpoints Two and Three, you turn northeast into the tall grass of a fallow field. After moving about 250 meters, your forward security reaches the road leading east from the mosque. You send two fire teams (-), three Marines each, to establish security on the east and west flanks of the patrol and begin sending the patrol across the road to establish far-side security.

Half of the patrol makes it across the road and starts taking steady small arms fire from somewhere north or northwest of your positon. No one is hit, but the fire does not cease as everyone takes cover. Your point and cover men report back that the fire may be coming from the buildings between Checkpoints Four and Five. The high grass provides good concealment but no cover, and you order the lead elements to break contact and move south of the road.

Despite the steady fire from the northwest, everyone makes it to cover on the low ground south of the road, and you consolidate the main body of the patrol in a tight 360-degree perimeter. You leave your flank security teams in positon.

After reporting your situation to the company, you receive the following change of mission:

Soon after receipt of the change of mission, your west flank security team reports that it sounds as if the AUXFORs around Checkpoint One are firing their weapons in the direction of Checkpoints Four and Five.

There is no change to your patrol’s organization, and you still have ten combat-effective Marines including yourself and the following attachments for the patrol, making a total of twenty men:

Fire support remains limited to the battalion’s organic mortars and Marine rotary-wing CAS on alert +15 at the battalion FOB (forward operating base). There is one registered target at Checkpoint Seven: AB1107. The Al Mumeet Mosque is established in all aviation special instructions (SPINS) as the center of a 200m by 200m rotary-wing attack positon, “AP Snake.”

Your communications are limited to unencrypted, VHF and UHF, voice-only radios.

What are your orders to the patrol?

What coordinating instructions for the QRF do you relay back to the company?

Quickly formulate your plans and issue your orders. Provide a brief discussion of the rationale behind your actions. Submit your solutions by email at gazette@mca-marines.org or to the Marine Corps Gazette, TDG 03-18, Box 1775, Quantico, VA 22134. The Gazette will publish solutions in an upcoming issue.