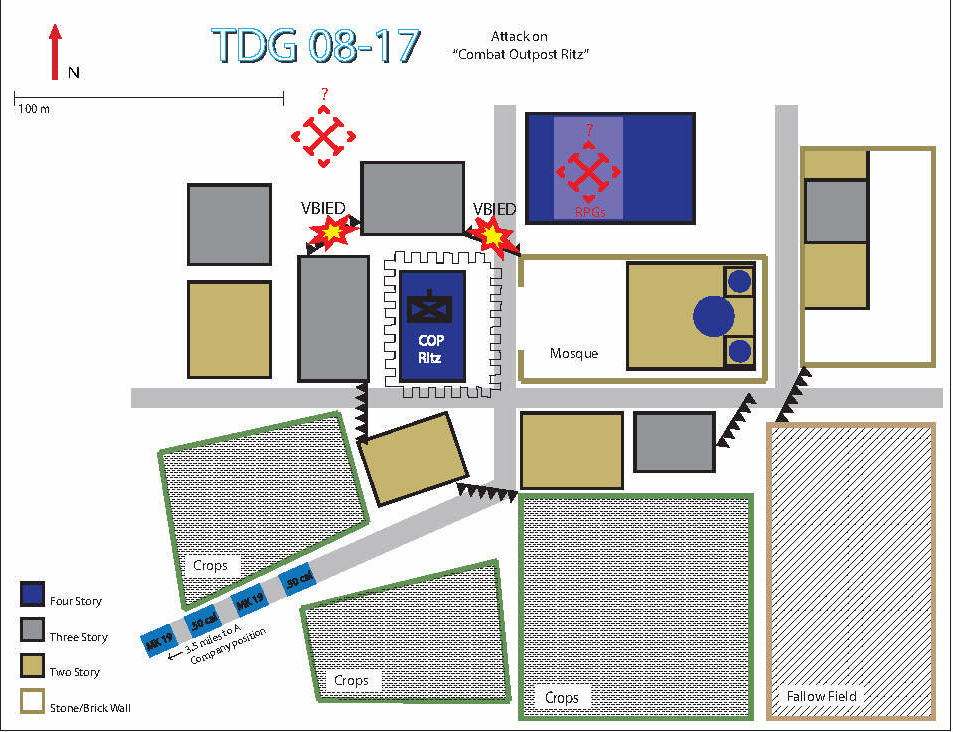 You are the 3d Platoon Commander, A Company, 1st Battalion, 1st Marines, and you have been left in charge as the senior Marine aboard COP Ritz (Combat Outpost Ritz). It has been two days since the two squatter families living in the COP took everything they could carry and left after an unannounced visit from two “cousins.” Your company commander and a team of three MUGA commandos have been outside the wire since dawn meeting with the Imam of the Al Mumeet Mosque and a local tribal leader to try to ascertain what may have prompted the sudden departure of the squatters.

Immediately after noon prayers, two VBIEDs [vehicle borne IEDs] simultaneously struck the HESCO and “Jersey” barrier obstacles across the two northern streets approaching the COP. Immediately following the detonations, several teams of four “military age males” with automatic weapons began firing and moving toward the barriers. The obstacles were undamaged by the blasts, and the VBIEDs only added burning debris to the barrier plan. Your Marines and the MUGA commandos at the COP have been well-rehearsed for this “most dangerous enemy action”—their fire covering the obstacles has been accurate and effective. The COP’s perimeter has not been penetrated, and at least 20 attackers are dead or incapacitated. Several attackers were also wearing “suicide” explosive vests and detonated on or near the obstacles. You estimate there are at least 40 more attackers in covered firing positions to the northwest who are organizing additional attempts to breach the COP’s perimeter.

You are still unable to raise the “Skipper” on the company tactical radio net. You are attempting to contact the battalion by radio and landline but are having no success. The radio traffic is broken and unreadable, and the landline is dead. The COP has four days’-worth supply of ammunition for all weapons; however, you are within one day of a critical shortage of potable water and had been expecting a resupply convoy later in the afternoon.

Your attachments and support available at the COP have not changed. Fire support is currently limited to the battalion’s organic mortars and Marine rotory-wing CAS; however, you have not been able to communicate with the battalion. You doubt you would be able to request medevac support either.

While you are trying to raise your company commander again, the first volley of three RPGs (rocket propelled grenades) hits the COP. None get through the chain-link fencing and chicken wire installed over the windows in the Ritz, but one came close to a direct hit on an east-facing top-floor window. Your 1st Squad Leader, Sgt “Blade” Edgington, reports that there are at least four RPG gunners in the four-story building northeast of the COP and that heavy small arms fire preceded the RPG volley. You get a cold, tight feeling in your gut as you realize your men are being effectively suppressed by the RPGs teams across the street while the “suicide bombers” to your north are preparing to attack. Adding to the friction, you personally observe numerous civilians, mostly women and children, in the same building as the RPG gunners and can hear them praying and crying. Your Marines are keenly observant of the need to positively identify their targets as they judiciously attempt to return fire.

The battalion radio breaks squelch and 1stLt Fonbhone, the S-4 A, is on the line. He reports his resupply convoy hit an IED about a mile outside the city with no KIA (killed in action) and one MTVR requiring tow or recovery. Somehow, he learned from the battalion that the COP was in danger of being overrun, and he has taken his four M1113 up-armored HMMWVs with two MK-19s and two “Ma Deuce .50 cals” up to the fields just south of the city. He wants to know your situation and where you want him to get the heavy guns into action.

What is your choice: do you want him the fire on the RPG gunners, the “suicide bombers,” or do you have another idea?

Quickly formulate your plans and issue your orders. Include an overlay sketch and provide a brief discussion of the rationale behind your actions. Submit you solutions by email at gazette@mca-marines.org or to the Marine Corps Gazette, TDG 08-17, Box 1775, Quantico, VA 22134. The Gazette will publish solutions in an upcoming issue.