by 1stLt Michael A. Hanson 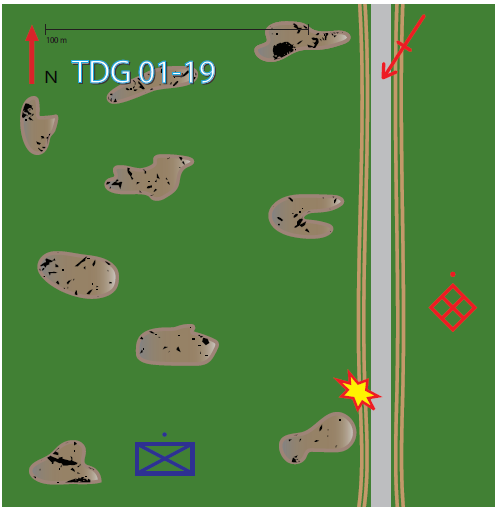 You are a Squad Leader in Company B, 1st Battalion, 7th Marine Regiment. Your squad is conducting a patrol moving north, parallel to a road situated on a berm about one and a half meters above ground. The terrain surrounding the berm is flat with multiple scattered rock piles about one meter tall. Your squad takes fire from a light machine gun across the road about 100 meters ahead. As you instinctively lunge for cover, you see an enemy infantry squad maneuvering toward you from behind the berm on the opposite side of the road. They begin throwing hand grenades across the road at your Marines. The first few explode far enough away that none of your Marines are hit, but the grenades are getting closer. You hear enemy voices.

You have a thirteen Marine rifle squad with a standard complement of M203 grenades, M67 fragmentation grenades, and one AT4 Rocket. What do you do?

What commands do you give your squad in your frag order?

Provide a sketch depicting the actions you expect your fire teams to take as a result of your frag order.

Submit your solution by email to gazette@mca-marines.org or to the Marine Corps Gazette, TDG 01-19, Box 1775, Quantico, VA, 22134. The Gazette will publish solutions in an upcoming issue.

>Author’s Note: This scenario is adapted from one described in Colder Than Hell: A Marine Rifle Company At Chosin Reservoir, by Joseph Owen. It has been updated to reflect current rifle squad table of organization and equipment. The terrain has also been modified for simplicity.