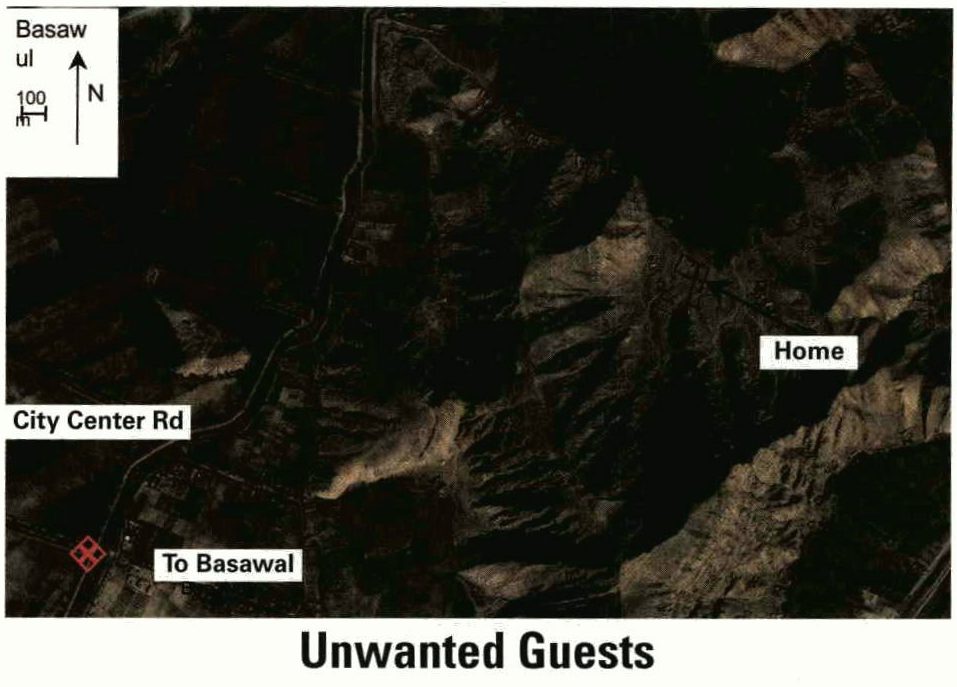 You are Ahmed al Aba. You have been the patriarch of your extended family in Basawal for over 30 years. Your extended family is of the Wakhi tribe, and your family interests are primarily in farming and trade. Over the past several years you have watched the Taliban leave to Pakistan through the Khyber Pass, the Americans move in and then leave, the Taliban return, the Europeans come and go, and now the Americans have returned. During this time you have noticed other tribes and families ally themselves with the foreigners, installing themselves in government and army positions, and then stealing from the people they should be protecting. Your family has not benefited from the occupation and has suffered in confrontations with the local "army" and "police" force who are primarily members of the majority Pashtun and city-dwelling Tajik tribes. You have regained some of your family's prominence by hosting and moving weapons and people from Pakistan into Jalalabad. While you do not have strong passions toward this "insurgent" faction, they at least let your family live in peace according to your customs and tradition and provide you with some means to resist the corrupt police and army in your area.

Over the past month the Americans have been supporting local Pashtun and Tajik tribes as they seek to consolidate power over the region. To further this gain, the Americans have been training the local police force. While this has had the desired effect of making them less corrupt (they cannot charge bribes in front of the Americans), it has also given them more power to attack other family and tribe strongholds, usurping power in the area.

In response to this situation, you called the leaders of three of the families in the area with the idea of diverting some Taliban fighters who flow through your area from Jalalabad into the town of Basawal in order to attack the local police and remind them who is boss. The patriarchs agreed to your idea, and three of you arranged a home and weapons for the fighters in Basawal.

Fifteen fighters arrived yesterday, and you met with their Taliban leader who agreed to do what you asked. In the Afghan tradition, the night before the first attacks in Basawal, the fighters, the family heads, and several members of your family have come to your house to celebrate the coming venture.

Just before sunset, as you are readying to sit and eat, you see your son, Ustad, talking excitedly on his cell phone. He hangs up, walks over to you in defiance of good manners, and whispers in your ear, "Father, my friend told me there are some, maybe four, American armored vehicles with an Afghan police vehicle perhaps 1 kilometer southwest of here along the City Center Road." You look around and realize that you have 1 5 Taliban fighters, the heads of 3 families with 2 fighting- aged sons each, 20 AK- 47s with 2 magazines each, 6 grenades, and 1 rocket propelled grenade with 4 rockets in your home. There are also four women and children from each of the families who have not learned to fight. You think and remember that your pickup truck and van are inside the compound. You close your eyes, gather your thoughts, and walk over to the head of the three families and the Taliban leader. What do you say?

In a time limit of 20 minutes, indicate what actions you will take, what your intent is, and what actions the family heads and Taliban leader must take tonight.

1. Do you face a threat or an opportunity? Explain.

2. What (and when) do you believe the Americans and Afghan police will do tonight?

3. What is your intent for your actions?

4. How do your actions and orders meet your inrenr?

5. Can you ambush the Americans? If so, how?

6. What do you consider mission success?

7. How sensitive are you to:

* Casualties among your family?

* Casualties among the Taliban?

* Casualties among the other family members?

* Damage to your property?

8. Do your actions force the Americans to fight? Is so, what are the possible repercussions of a fight with the Americans?

9. If you chose not to attack the Americans, what other methods could you use to neutralize them?