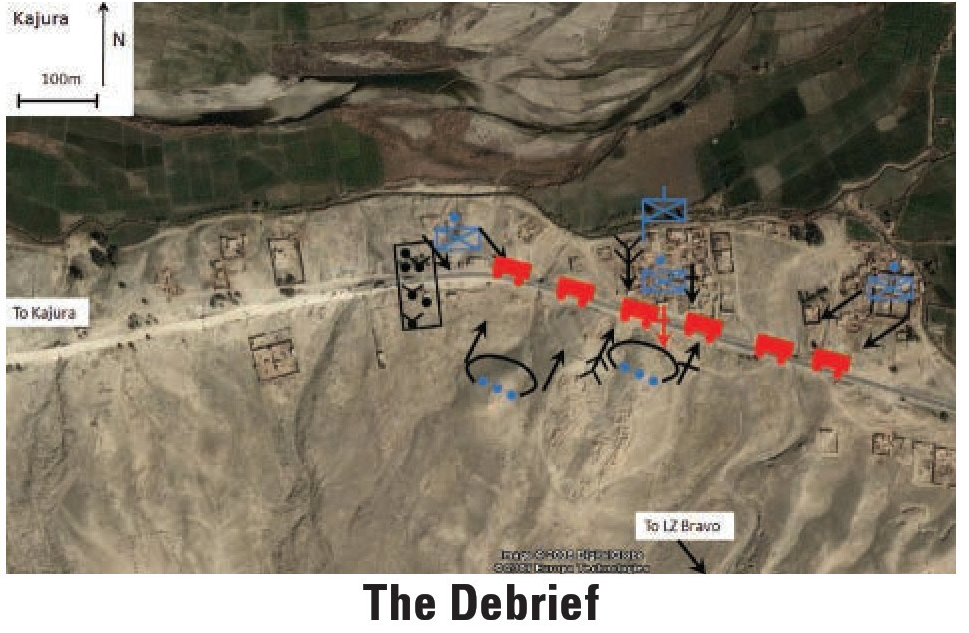 You were the 11th MEU S-3A (assistant operations officer) but have been reassigned as the team leader of an advisor/liaison team assigned to 15 th Afghan Infantry Battalion. Approximately 4 months ago the MEU was sent to Jalalabad, Afghanistan, in support of NATO forces during Operation ENDURING Freedom. The 15th Afghan Battalion completed basic training prior to your arrival. At this point in their training, they can conduct limited independent operations at the company level and often require coalition assistance for vehicle maintenance, logistics planning, and operational planning. The 15th Battalion's area of operations is a stretch of land between Jalalabad and Kabul, the regional home of the 15th. Their primary mission has been interdiction of Taliban and insurgent weapons and personnel between Kabul and Jalalabad.

Last night 2d Company conducted a night ambush of an insurgent convoy. You were in Kabul with the battalion commander coordinating a resupply and maintenance budget for the battalion's vehicles. You assigned your staff sergeant who is a subject matter expert in helicopter observations to observe the company's ambush, a mission he has done before. The 2d Company has small arms capability similar to a Marine rifle company; however, its communications and night vision equipment is limited. The following morning, the 2d Company returned to the battalion headquarters riding in what you suspect are captured vehicles. You attend the company commander's debrief to his battalion commander and members of his staff. Following are the company commander's comments:

"My rifle company, with two medium machinegun teams and two assault teams attached (armed with rocket propelled grenades), was ordered to conduct a night ambush on a known enemy supply route. As the company commander, I had a night vision monocular. We did bring trip flares and six antitank mines along with several antipersonnel pressure mines. Our communications net enabled me to speak with my battalion headquarters and locally to each platoon leader.

"Intelligence reports indicated that enemy supplies are transported by trucks with the occasional armed jeep or light armored car acting as an escort. The trucks generally have an infantry platoon (minus) as local security as well. Convoys are six to eight vehicles long.

"The company was dropped off by helicopters (provided by the MEU aviation combat element) at Landing Zone Bravo at 0135, some 5 kilometers from the ambush site. The terrain was mountainous, with rocky outcroppings and low scrub. Nighttime temperatures were near or below freezing. The unit marched in column, keeping to a counterlevel below the crest, to the ambush site. Once there a platoon conducted a reconnaissance and then we assumed the fighting positions as outlined on this map. We kept radio talk to a minimum using runners or chemical light signals when able. While it was still dark, the enemy convoy approached from the village as anticipated. No jeeps or armored cars were visible from my position.

"The convoy entered the kill zone, and the company opened fire with the headquarters initiating the ambush. The enemy was hard pressed to react, but some of the infantry managed to return fire aided by a heavy machinegun (HMG) from a jeep in the middle of the convoy, but then they were overwhelmed. We suffered only four lightly wounded, one seriously wounded, and one killed in action.

"While medical attention was given to the wounded, we conducted a quick sweep of the enemy in search of items of intelligence value. We found none but did notice we destroyed a jeep with HMG. Following this search, we discovered that most of the vehicles were still operational. We cancelled the scheduled helicopter extract and returned with a large motor pool. We left the mines in place in the hopes the enemy might set them off later when picking up their dead."

After hearing the last sentence you glance over at your staff sergeant, who smiles and nods. This is your signal that he did not know that the mines were left in place. He also tilted his head slightly, an indication that the company commander is telling the truth as far as he could observe.

The company commander turns to you and asks, "The mission was clearly a success. Don't you agree, Captain?"

1. Would you critique the mission in front of the battalion commander, pull the company commander aside, or a combination? Why?

2. In regard to the minefield, what is your team's responsibility in this matter?

3. What are some ways that the Afghan battalion can defeat the Kajura population's will to resist government rule?

4. Will the action of 2d Company help defeat the enemy resolve? Explain?

5. Do the actions of 2d Company further the objectives of the MEU commander? Explain.

6. What do you do if you find out the convoy that 2d Company ambushed was a local militia vice Taliban or alQaeda?

* Maps must contain appropriate symbols and be submitted electronically.

* Maps must be separate electronic attachments.

* Solutions will be posted on the Gazette website, not in the print magazine.