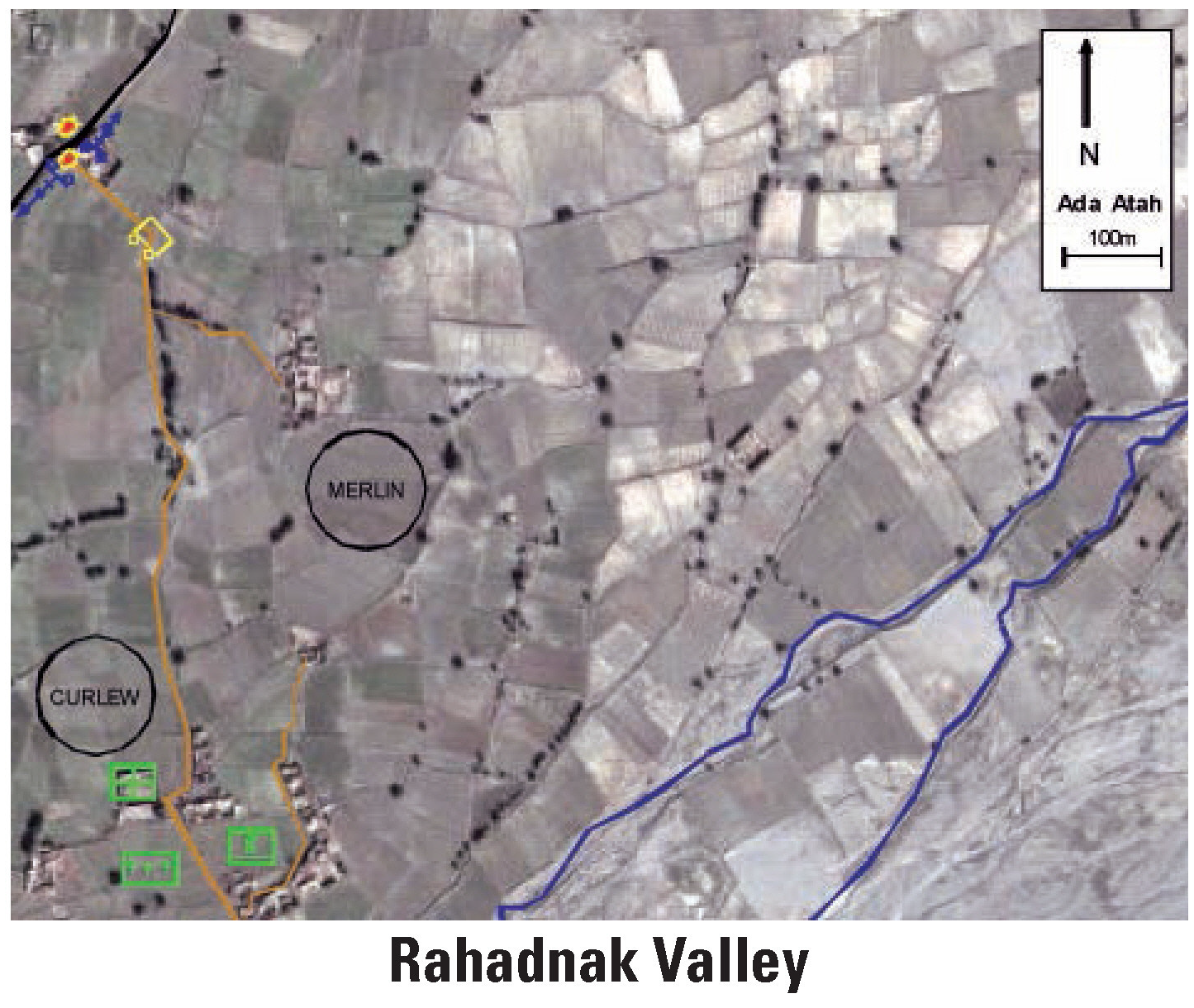 You are the Squad Leader, 1st Squad, 3d Platoon, Company G, Battalion Landing Team 2d Battalion, 1st Marines (BLT 2/1). Recently the MEU was sent to Jalalabad, Afghanistan, in support of NATO forces during Operation E N-DURING FREEDOM. You have been in-country approximately 2 months and have been assigned to the northeast sector of the area of responsibility, Nan-garhar Province. Last month Company G engaged sizable needihajum forces under Sher Dil during a cordon and search operation within the valley. Company G was able to disrupt arms trafficking via the valley; however, small pockets of resistance continue to slip through the valley (squad-sized, Soviet small arms, light machineguns/rocket propelled grenades (RPGs)). Some of the platoon checkpoints (CPs) have received inaccurate 82mm mortar fire in the last week. Additionally, Company G's actions last month resulted in significant collateral damage to local poppy fields and goat herds. Several houses and barns within Ada Atah were damaged, and the sole pump in the village center was crushed under the weight of the company's assault amphibious vehicles. Unequal distributions of solatia payments (appearing to favor Kushtuz farmers in Ada over the minority Nuris-tani) have led to increased thefts and violence against Kushtuz by nonaligned Nuristani tribesmen. The company CP is located 25 miles southwest, and the commanding officer has deployed his platoons throughout the valley to provide security for nongovernmental organizations (NGOs), conduct security patrols, and support human exploitation teams in answering demographic requests for information about the local leaders, population, atmosphere, etc.

It is about 1830 now after 3 days in Ada Atah. The villagers are beginning to be less skittish around your Marines and even the World Agro Fund (WAF) and Healthwatch are less irritable. As you head under the cover of an awning by a stable, you hear Cpl Clark's voice over your internal squad radio, Boss, this is Echo 4 Charlie. I've got two males in man-dresses checking out the village from the farm 300 meters to the north. They were out there this morning, but they're back with binoculars now.

Roger, Charlie. You release the handset, but something has changed in Ada Atah. The village is still packed. There is a hum, a murmur underneath the noise of the crowd. Then you notice the soccer ball lying still in the middle of the road. The flutes of the shepherds aren't playing. There are no children. A WAF volunteer sprints from the pile of seed to the medical center. As she does, a rifle cracks over the noise of the crowd. A gunman with an AK-47 stands behind a donkey cart and tries to incite the crowd, 'Bey-baies . . . paida-warunah . . . bon-sat-tunah!'? A rock is hurled from the crowd and strikes the wall next to you. Seconds before the rock above you explodes you see an RPG skip off the top of the pile of seed bags directly across the village. The chatter of machinegun fire comes from the farm to the north. Your radio squeals as your fire team leaders talk over one another, 'oeBoss, Williams is hit bad. He needs casevac!'

As soon as you look over to Cpl Clark''s position, a teenage boy from the village runs across your path with an AK'?47. He is 1 meter ahead of you and doesn't see you. What now, Sergeant?

Given the deployment and current activities of your squad, and in a time limit of 5 minutes, issue your verbal orders to your element leaders and any reports to higher headquarters. What are you doing after your orders are issued?

1. What are your priorities? The casevac? The machinegun? The RPG? The boy?

2. What do you want to make happen in the next 60 seconds?

3. What can you make happen in the next 5 minutes?

4. Do your actions and their probable results escalate or deescalate violence in your area of operations?

5. Do you want to kill or capture possible opponents?

6. What considerations do you give to injury to noncombatants and damage to local property (collateral damage)?

7. How much collateral damage do you anticipate as a result of your actions?

8. Assuming your actions result in a fight and victory over insurgent forces, what actions do you take with regard to:

9. Based on your actions in question 7, what do you expect civilian/NGO response will be to collateral damage:

* At the conclusion of fighting, while you are in the area?

* Within 1 hour after you leave?

10. Based on your actions in question 7, what is the expected enemy response to collateral damage:

* At the conclusion of fighting, while you are in the area?

* Within 1 hour after you leave?

11. What actions can you and the BLT take to counter and exploit enemy and civilian responses to collateral damage:

* While you are in the area?

* After you return to base?

* When you subsequently patrol in the area?

12. What actions have you, the BLT, and local forces taken to defeat enemy motivation to attack:

* While in the area?

* After you return to base?

* Over the next week?