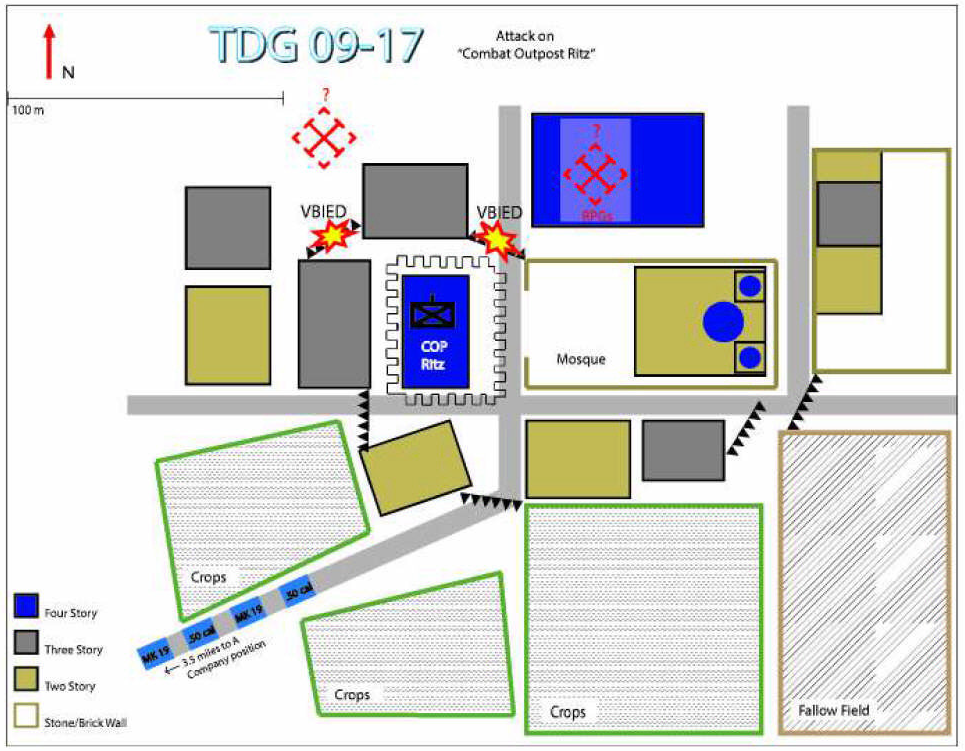 You are the Company Commander, A Company, 1st Bn, 1st Marines. It has been two days since the two families of squatters living in COP Ritz hastily left their rooms in the outpost after a visit from two of their "cousins." You have taken a team of three MUGA commandos, including Sgt Chef Benazzi. His seniority and experience remind you of an old-school infantry gunnery sergeant, and he has also proven to be one or your most savvy interpreters. You have been outside the wire since dawn meeting with Imam Mehmet Binouadoud, the Imam of the Al Mumeet Mosque, and Mkuu (chief) Uhuru Honore, the leader of the Albu Xuzuri tribe. You are determined to build on your relationships with these two very different local leaders to get to the bottom of the sudden departure of the squatters and to shore up local security in the neighborhood.

Your reports, based on many engagements over the past months, have helped confirm multi-source intelligence analysis findings that the leaders of the Albu Xuzuri tribe may be ready to openly support the MUGA and the CJTF. Your battalion CO has also "read you in" regarding diplomatic efforts at the U.S. mission in the capital, Minna Sultan Usween, to bring the Nuzuris into the MUGA. The Nuzuris are numerous and heavily armed, but they are a minority in the country. They have been historically ostracized as the descendants of enslaved mainland Africans brought to the country by the French in the 18th century. The Nuzuri are further stigmatized due to their unorthodox interpretation of Sufi Islam influenced by tribal and Christian practices. In response, they have developed a strongly self-reliant and isolated warrior culture with a reputation for violence, revenge, and criminal enterprises.

The three of you, along with Sgt Chef Benazzi, are all sitting on the floor of one of the offices on the third floor of the Imam's compound due east of the mosque, drinking sweet tea. Your commandos, the Imam's mosque police, and the Mkuus personal guard are posted outside. Soon after the noon call-toprayers, you hear two explosions and heavy small arms fire. You see smoke rising from the northern boundary of the COP, but you cannot make contact with your Marines on the company radio. More automatic weapons fire and several smaller explosions follow, now you are able to see smoke rising from north of the COP. You cannot see the action north of the COP and have no idea how many attackers are involved, what has caused the explosions, or what actions your Marines are taking.

You are still unable to raise your 3d Platoon Commander, 1st Lt Przyby, who you Iert in charge at the COP. As you silently recite the "mantra" of tactical reporting-"What do I know? Who needs to know? Have I told them?"- you use your local network cell phone to call the battalion's CMOC (civil-military operations center) and, after a brief exchange with one of the contracted interpreters, you provide a "Flash" SITREP to the Battalion Operations Officer: "40-plus enemy; attacking COP Ritz from the north; time: now; automatic weapons and IEDs; COP in danger of being overrun." You deliberately create a number of attackers to "work the system" the CFACC (combined force air component commander) uses to authorize CAS requests when there is a tactical unit in contact, or "TIC." You know 30 enemy is the CJTF Commander's threshold to immediately pull attack aircraft plus either rotary-wing or a UAS terminal controller from one of the "stacks" managed by the CFACC from their palatial combined air operations center at the international airport in the capital. Further, you add a "worse case" assessment about COP Ritz being overrun to ensure your Marines have the best chance for immediate support. As you finish your call, you hear the familiar sound of a .50 cal machingun and the crum-crump-crump of a MK19. You had been expecting the S-4A with a resupply convoy, and it sounds as if he has arrived and is joining the fight.

The Mkuu turns to you and, in heavily accented but perfect English, says, "My men can help you. My Militia is here protecting us at this meeting, and they are ready to fight and kill the terrorists attacking your Marines. I know you are only a captain, but at least you are here with us. I also know you understand what I am offering, and your generals and colonels will listen to you. You will make your reports, and you will see to it that 1 meet with the general of your 'see jay tee eff.'"

He goes on to tell you that he has 30 militiamen with rifles and RPGs spread between the large, 4-story apartment building north of the Mosque and the COP. Mkuu Honore assures you that his men will support your Marines and help you get safely back to the COP. He goes on to report that the Albu Nuzuri are "blood enemies" of the terrorists and the tribes who support them, and that they are ready to secure this part of the city for the MUGA. Sgt Chef Benazzi and the Imam have been conferring Arabic, and while clearly caught off guard, they both appear pleased.

Suddenly, the Mkuu calls in one of his personal guard who is carrying a Styrofoam cooler held together with duct tape and wire. With obvious pride, he declares "to prove my point..." and opens the cooler to show you the severed heads of the two "cousins" who had visited the squatters at COP Ritz two days ago. Sgt Chef Benazzi starts cursing in Arabic, and Imam Binouadoud reels in shock. The commandos, mosque police, and Nuzuri Militia start screaming at each other in the hall way. You fight back the nausea and lean in to the Mkuu.

Realizing what this means to the CJTF and your battalion, do you accept his offer of support? "Deal, or no deal?"

Where do you put yourself in this fight? Do you get back to the COP as fast as possible, or do you "embed " with your new allies?