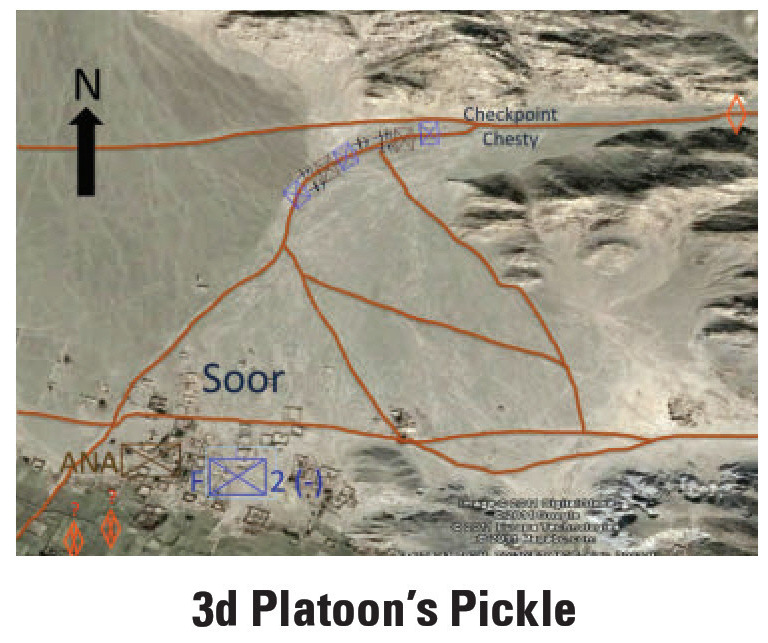 You are the platoon commander of 3d Platoon (foot-mobile), Fox Company, Battalion Landing Team 2d Battalion, 1st Marines, 11th MEU. Last month, after completing operations in Nangarhar Province, the MEU was sent to support NATO forces in B armai District of neighboring Paktika Province. Two weeks ago, B armai District witnessed dozens of small-scale battles. The fighting has claimed the lives of hundreds of civilians, most of them victims of NATO air and artillery strikes. Because of this, several once pro-NATO villages have begun providing the Taliban with intelligence, supplies, and even men.

Your battalion commander finds this situation alarming and wants to strengthen relations between his Marines and the remaining pro-NATO villages in the battalion area of responsibility. To this end, he has sent each of his companies to billet on the edge of - or if granted permission, within - a large pro-NATO village. Each company has the same mission: protect the villagers and improve their quality of life. Your company was assigned to Soor.

When Fox Company arrived in Soor, your company commander met with the village elders. Impressed by his knowledge of Pashto (and promises of food and medical supplies), they invited the Marines to stay in the village. A few days later, an Afghan National Army (ANA) infantry platoon arrived to augment your force and facilitate cooperation between the Marines and villagers. Consisting of three light infantry squads, the Afghan platoon is highly motivated but knows only the most rudimentary skills of soldiering, and except for its Soviet-era weapons, it is poorly equipped. The Afghan soldiers lack body armor and night vision devices.

Since the Marines came to Soor, the village and its environs have been free of enemy activity. The villages where your sister companies are stationed, however, have seen daily (and sometimes nightly) company-sized attacks by the Taliban. Often poorly coordinated, the attacks have cost the enemy hundreds of dead, the Marines dozens, and the villagers few.

Today you and your men spent the afternoon instructing the Afghan infantry platoon in ambush techniques. With the training over, your platoon began readying itself for a night patrol. Then, around 1700, you received new orders from your company commander. "Lieutenant," he began, "we just received word from battalion: 20 minutes ago an unmanned aircraft system (UAS) discovered a convoy of 8 pickup trucks a few hours northeast of here. Intel says they're Taliban, about 50 in number, who came across the border from Pakistan sometime this morning. The trucks appear to be carrying at least a dozen crew-served weapons. And there's a good chance that the leader of Taliban forces in Barmal District is among the passengers. Higher headquarters wants the convoy taken out for obvious reasons. Unfortunately, we won't have the aid of the UAS. It's been sent to help friendly forces caught in an ambush. Now because there are so few good roads in the area, the convoy must pass through Checkpoint Chesty, about 3!/2 klicks northeast of Soor. Ambush it there. I'm giving you three assault teams and a machinegun squad (two teams) for the mission. Since you just finished training the ANA platoon in ambush techniques, I'm sending two of their squads along. You also get the forward air controller (FAC). Two Cobras (AH-IW) are on call, so if you need them, they're there. At its present rate the convoy should reach the checkpoint a little over an hour from now. As you know, the terrain between here and there is relatively flat and easy to travel, so you should have plenty of time to set up the ambush. Move out within 15 minutes."

You give a quick patrol order to your subordinate leaders, conduct final equipment checks, and move out. You deploy your force in column formation, with the assault teams, machineguns teams, and ANA squads interspersed between your three rifle squads. 1st Squad is on point.

As the lead elements of the ambush force near Checkpoint Chesty, you hear explosions coming from Soor. You try contacting your company commander on the radio, but he does not respond. You then direct the FAC to check with the battalion air officer. The FAC does so and learns that Soor is taking heavy mortar fire. To make matters worse, the FAC informs you that at least two groups of Taliban (strength unknown) are moving to assault the village from the southwest. Just then, 1st Squad radios in. They report seeing 13 vehicles in the distance. The convoy is fast approaching. Night is falling. What now, Lieutenant?

Within 5 minutes, give your solution in the form of a frag order to your subordinates. Be sure to include your intent, an overlay sketch of your plan, and the rationale for your decision.

> Editors Note: This TDG was originally submitted by Damien O'Connell with comments and suggestions by Bruce Gudmundsson and Timothy Jackson.

* Maps must contain appropriate symbols and be submitted electronically.

* Maps must be separate electronic attachments.

* Solutions will be posted on the Gazette website, not in the print magazine.