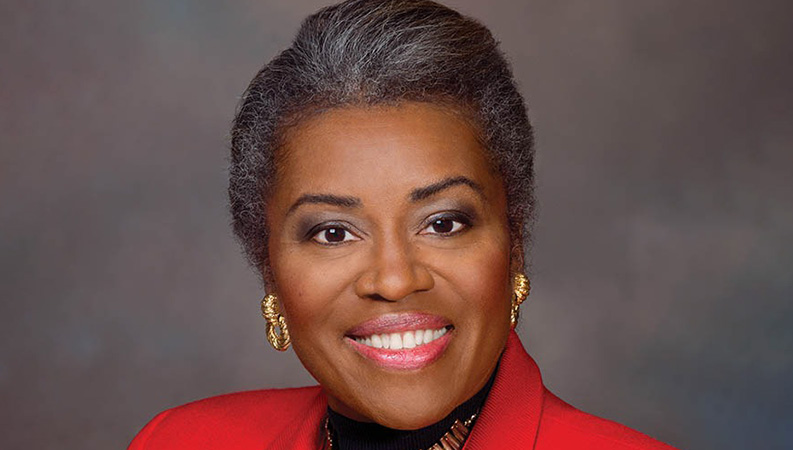 Winsome Earle-Sears: “Leadership is Not What You Say: It’s What You Do”

Courtesy of the Office of Lieutenant Governor Winsome Earle-Sears

In the 1980s, while serving as an electrician at Marine Corps Base Camp Pendleton, Calif., Corporal Winsome Earle observed a display of leadership that left a distinct and lasting impression. Assigned to their unit’s quality control section, Earle and her fellow Marines were working around the clock in preparation for a routine Inspector General inspection and were quickly growing exhausted.

“Our warrant officer came out to our platoon formation after we had come back for the evening and we still had another four or five hours to go after we had worked a long day, and he encouraged us,” she recalls during an exclusive interview with Leatherneck, Feb. 18. “I don’t remember the words because all I remember is … He was moving equipment with us, he was inspecting equipment, he was doing all kinds of things. He got more out of us that day than the days before. And I learned that leadership is not what you say: it’s what you do.”

It’s a memory that the first female lieutenant governor of Virginia, Winsome Earle-Sears, continues to call to mind today and strives to emulate as she finds her footing in the Commonwealth’s second-highest office. The affable Republican, who also is the first Black woman to hold statewide office in Virginia, was sworn in Jan. 15, alongside newly elected Governor Glenn Youngkin. Together, they’ve taken the helm of a state with a strong military presence, home to nearly 700,000 veterans and 27 military bases, including the Defense Department’s headquarters, the Pentagon.

Sears served just one enlistment in the Corps, but her identity as a Marine is ingrained in her, and she believes her experiences on active duty prepared her for the responsibilities of her office, which include presiding over the Senate of Virginia where she is responsible for casting tie-breaking votes. 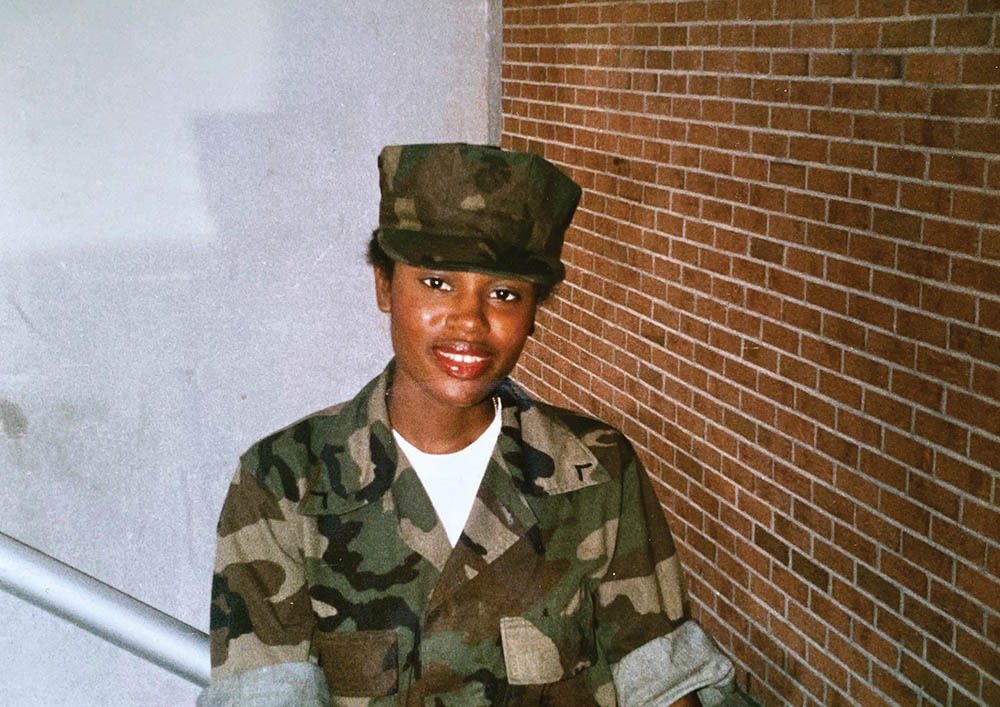 The newly elected lieutenant governor of Virginia, Winsome Earle-Sears, served as an electrician in the Marine Corps from 1983 to 1986. She credits the Corps with teaching her important lessons about leadership and self-discipline that she continues to implement today.

Born in Jamaica in 1964, Sears traveled to New York City as a child to live with her father in the Bronx. She describes an upbringing in which politics and government were frequently discussed—particularly by her grandmother, who was heavily involved in Jamaican politics and with whom she had a cherished bond.

“We just always talked politics. We read two different newspapers every day so that we could be able to have discussions about things,” Sears said, describing family debates about hot button issues, to which she adds, “Jamaicans are very political.”

Sears attributes this in part to the period of democratic socialist rule in Jamaica during her childhood years. “It just destroyed us,” she says. “We understood that you’ve got to get involved in government … Sometimes it takes you growing up and having a family that you start seeing things and you think, ‘No, this is not the future I want for my children.’ So, you get involved, and you can either light a candle or you can curse the darkness. To light the candle is to find the solution. To curse the darkness is to be a victim. And you know in the Marine Corps we always say there are no problems, only solutions and other options.” 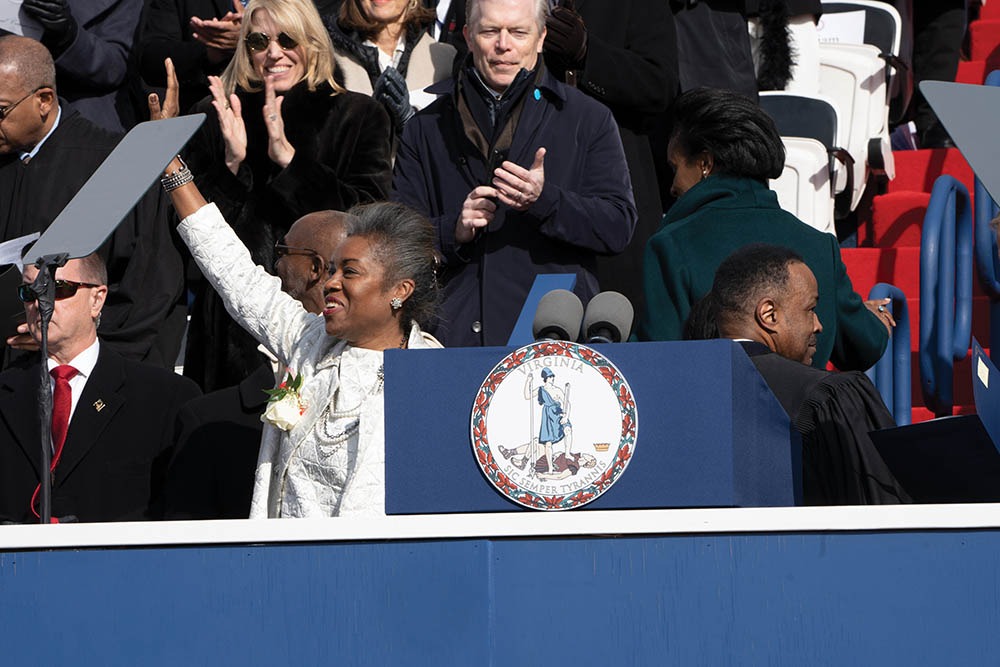 Sears attributes this in part to the period of democratic socialist rule in Jamaica during her childhood years. “It just destroyed us,” she says. “We understood that you’ve got to get involved in government … Sometimes it takes you growing up and having a family that you start seeing things and you think, ‘No, this is not the future I want for my children.’ So, you get involved, and you can either light a candle or you can curse the darkness. To light the candle is to find the solution. To curse the darkness is to be a victim. And you know in the Marine Corps we always say there are no problems, only solutions and other options.”

Her grandmother’s influence not only sparked an interest in politics and a responsibility to get involved, but also set her on the path to becoming a Marine. Sears was 18 years old when her grandmother died, and although she was enrolled in college and set to begin classes that coming fall, she found herself flailing.

“It just so happened that my mother in Jamaica happened to have a Jet magazine open to the ad with, ‘The Few, the Proud, the Marines.’ And I thought, ‘Yes, this is what I need. I need some discipline. I need a reason to live. And the Marines can sure do that for me,’ ” Sears recalls. “So that’s what happened. I joined the Marine Corps, and I got several reasons to live and a lot of discipline. It was one of the best times of my life for sure.” 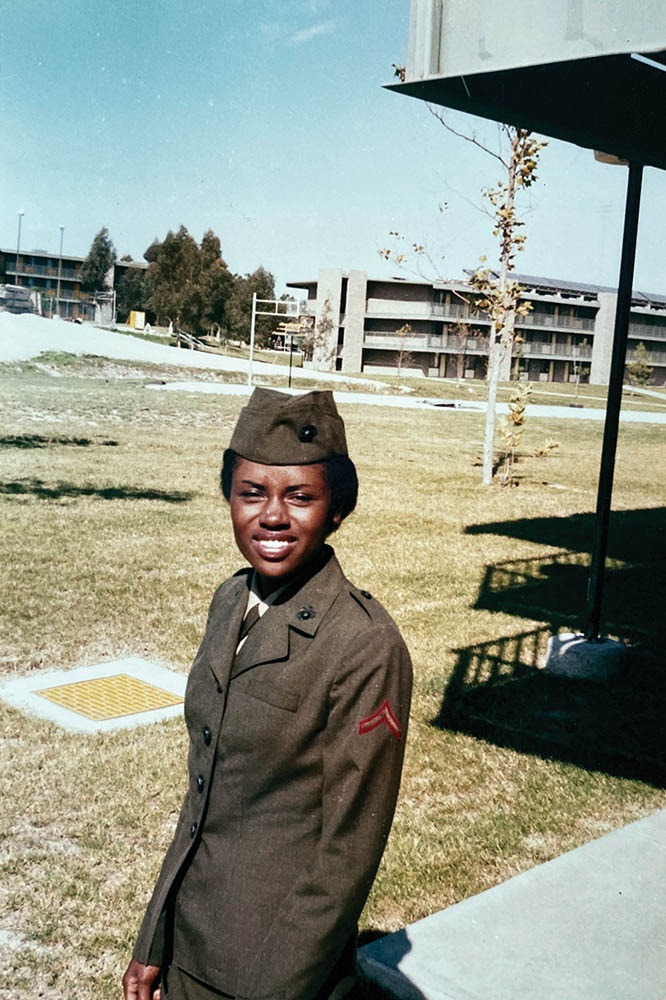 Then-PFC Winsome Earle is pictured here in uniform in 1983. Born in Jamaica, the young Marine became a U.S. citizen while serving on active duty.

After stepping on the yellow footprints at Marine Corps Recruit Depot Parris Island, S.C., in January 1983, Sears quickly learned that she would have to lose what her drill instructors referred to as her “New York attitude.”

“One time the drill instructor said to me, ‘Private Earle, you’re not going to make it, you understand me?’ And I thought, “Wait a minute. I can’t go home a failure!’” she recalls, referring to the DIs as “masters of psychology,” and adding, “You know, the Marine Corps, they see things in you that you don’t even see in yourself.”

The newly minted Marine, who was raised with the mentality that it’s important to acquire a trade or skill, found her niche as an electrician, attending the Marine Corps Engineer School at Courthouse Bay on Marine Corps Base Camp Lejeune, N.C.

After completing her military occupational specialty (MOS) training, Sears was assigned to Camp Pendleton, where she was one of just a few women in her unit. She describes how she quickly realized that she had to prove herself capable of meeting the same standards as the male Marines around her, who she says were more than willing to help her out. The gesture was nice, she said, but she knew she had to rely on her own merit in order to make it.

“You have to dig your own ditch, you have to pull your own weight and you will get the respect that’s deserving of you,” said Sears. 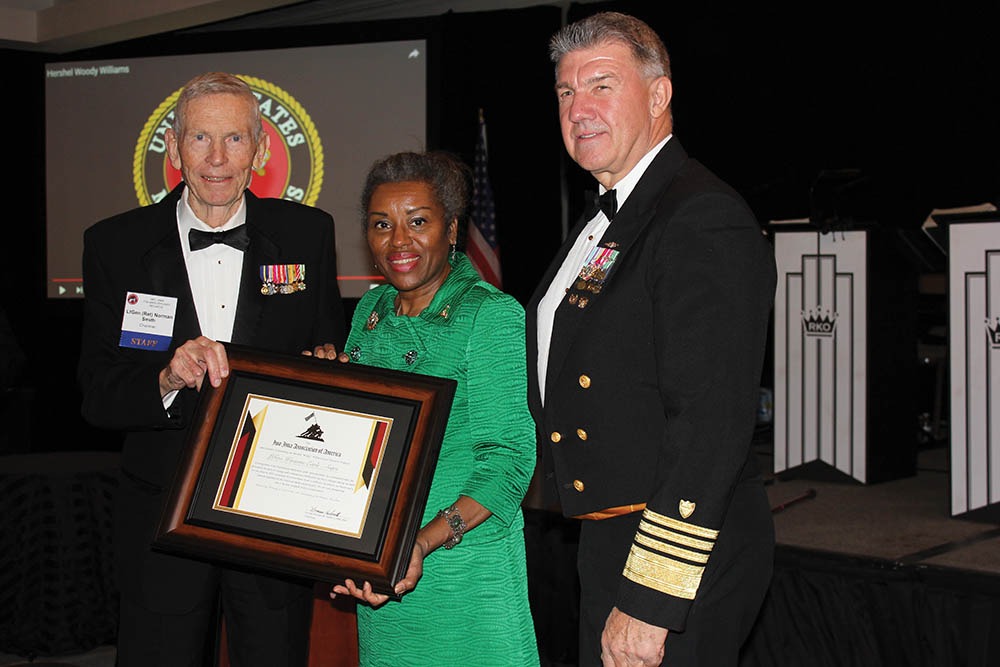 Sears, center, accepts the Iwo Jima Association of America’s first-ever “Spirit Award” during its annual gala in Arlington, Va., Feb. 19. The award was created as a tribute to Medal of Honor recipient and Iwo Jima veteran Hershel “Woody” Williams.

She recalls another instance in which she learned to take responsibility for herself: a formation for which she thought she was well-prepared but soon found out otherwise.

“My boots were spit shined, my cammies were excellently pressed, everything was good,” Sears said. But it turned out that her glasses had a few fingerprints on the lenses that she had missed. “And because of that, I didn’t get the day off like all of the others did. I remember thinking, ‘But they’re glasses!’ Details matter … If you’re going to do something right, do it right the first time. No excuses.”

It’s lessons like these that became part of Sears’ leadership philosophy, one that’s to this day heavily influenced by her service in the Marine Corps. She’s also driven by a deep sense of duty to the country that once welcomed her as a young immigrant. Soon after taking the oath of enlistment, she took another oath to become a U.S. citizen.

After leaving active duty in 1986, Sears went on to pursue a wide array of endeavors, including earning a master’s degree; running a homeless shelter; serving as a vice president of the Virginia State Board of Education; starting a small appliance, electric and plumbing business alongside her husband, Terence, who also is a veteran Marine; and receiving presidential appointments to the U.S. Census Bureau and the Advisory Committee on Women Veterans, which reported to the U.S. Secretary of Veterans Affairs. Elected to the Virginia House of Delegates in 2001, she served one term as a state legislator. Her varied experiences have afforded her a unique perspective of government, of service and of what it means to be an American. 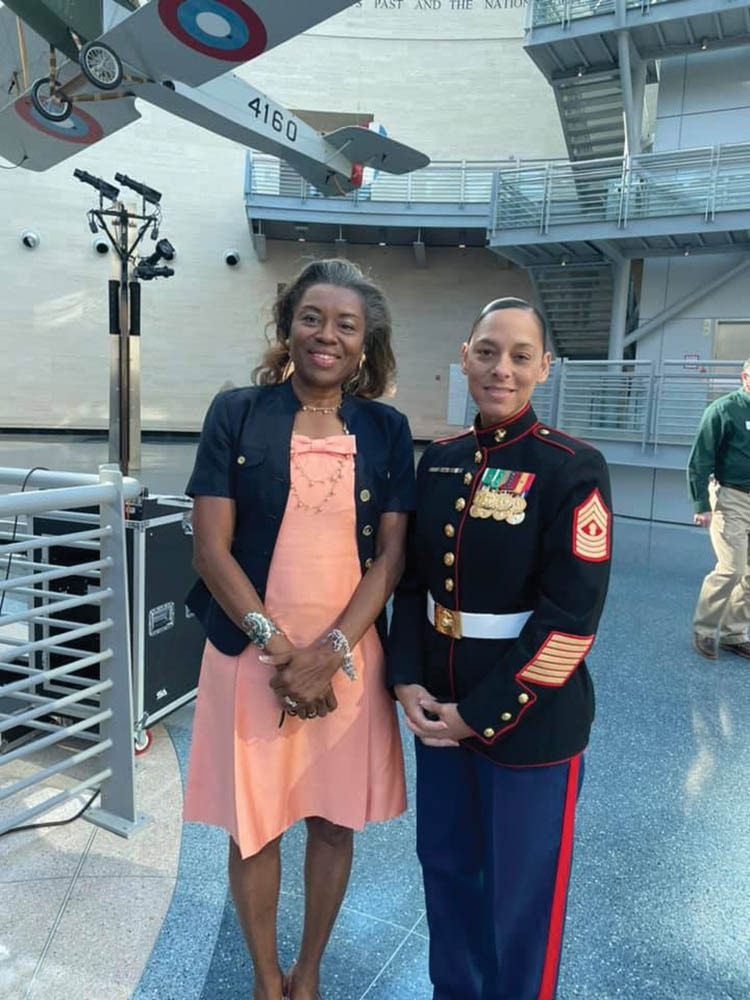 As Lieutenant Governor-elect, Sears attended a cake cutting ceremony at the National Museum of the Marine Corps in Triangle, Va., in celebration of the Ma­rine Corps Birthday, Nov. 10, 2021. During the event, she had the opportunity to visit with veterans, friends of the Corps, and active-duty Marines.

“I think sometimes we as Americans take our liberties for granted, and we don’t understand that you have to fight for your liberties. That you are the government,” Sears said. “Government depends on you being involved. Government depends on you demanding that your leaders represent you and represent you well. That they take your phone calls. That they look out for your best interests, that they’re not there for themselves. That the political leaders understand that they represent you.”

When she ran for the office of lieutenant governor of Virginia in 2021, a significant plank of her campaign was veterans’ issues, including a push to eliminate all state taxes on the first $40,000 of military retirement pay and expand Virginia’s veterans care centers and workforce transition programs. She’s looking forward to tackling issues that are unique to female veterans, adding that while you don’t have to be a veteran to understand how veterans are affected by policy, it makes a difference when you “speak the same language.” She has increasingly been hearing from veterans across Virginia who are seeking help in various capacities. 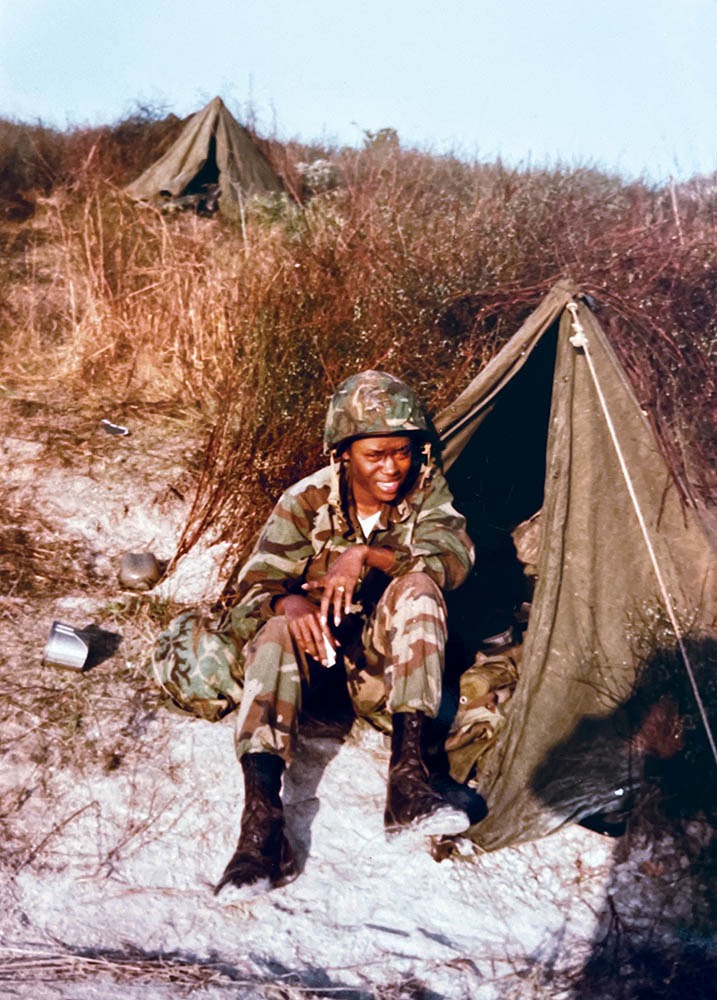 Sears recalls that as a young female Marine, she quickly learned she had to “dig her own ditch” in order to earn the respect of those around her. Even decades later, her identity as a Marine is still an integral part of who she is today.

Sears believes that it’s essential that veterans hold offices at all levels of government—not only to advocate for issues that affect military-connected populations, but also because of the unique skillsets and attributes that veterans bring to the table. Most importantly, perhaps, is an understanding of what really matters, and a shared identity not as Republicans or Democrats but as Americans. She encourages veterans who are interested in running for of­fice to understand the sacrifice and work involved. To them she says, “Give it your all.”

“As veterans, we don’t care if you’re Re­publi­can, Democrat, Green Party, whatever party you are,” said Sears. “When we raise our hands to uphold and defend the Constitution of the United States, we understand that we’re going to die for everybody. Not a political party. We are willing to give our lives for our country and those in it. So, we have a totally different perspective. We’re not so vitriolic sometimes. We understand that you can disagree without being disagreeable … not that veterans are without fault, but I think there is something special about a veteran being in office, having already once raised our hand to uphold the Constitution—it’s not something foreign to us. We’ve done it before.” 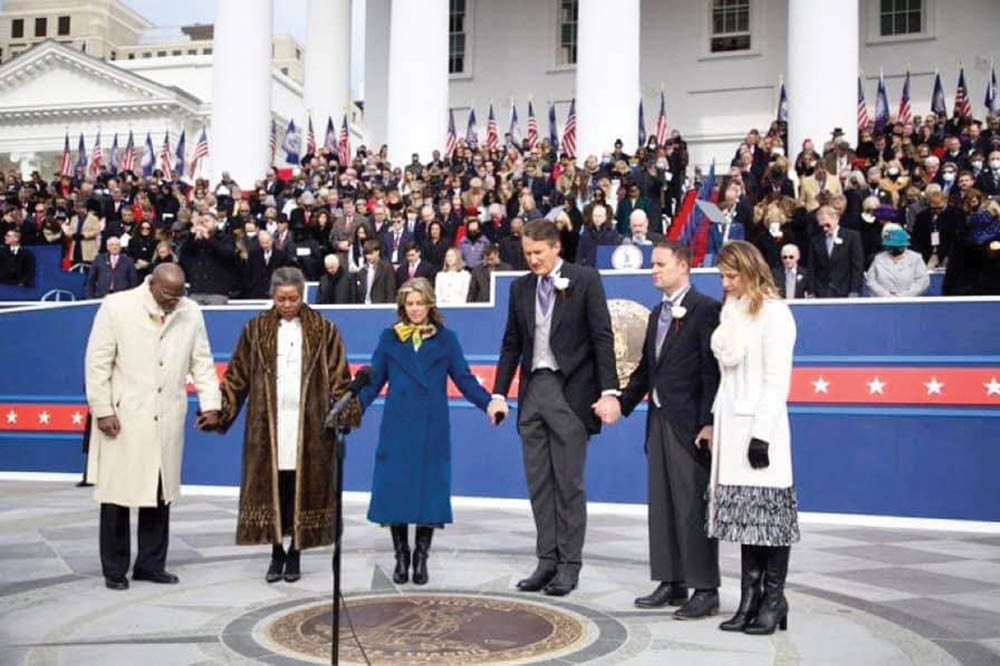 Sears, Governor Glenn Youngkin, and Attorney General Jason Miyares, together with their spouses, join hands after being sworn in at the Virginia State Capitol in Richmond, Va., Jan. 15. (Photo courtesy of the Office of Lieutenant Governor Winsome Earle-Sears)