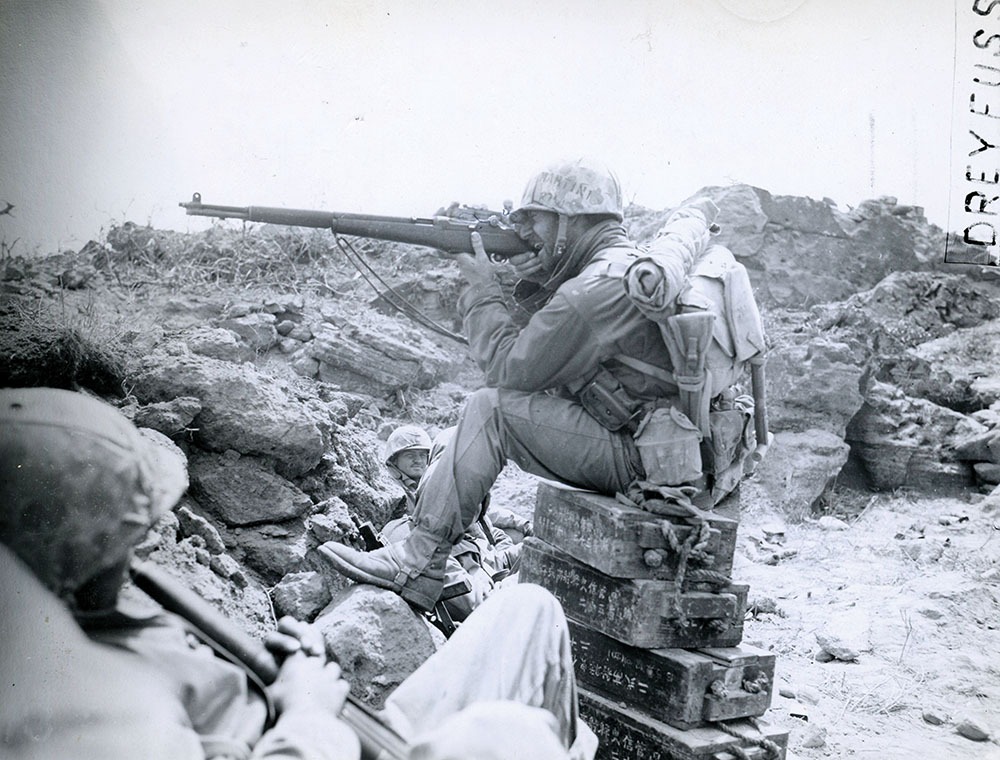 This is My Rifle: M1 Garand

Perhaps more than any other military rifle, John Garand’s iconic M1 holds a special place in the hearts of military riflemen and civilian enthusiasts alike. From the jungles of the South Pacific to the infamous “Frozen Chosin,” Marines carried this revolutionary arm for nearly two decades, using it to deadly effect in some of the Corps’ most famous battles.

The year was 1932, and then-Major (later Major General) Julian S. Hatcher at the U.S. Army Ordnance Office had a problem. The Army had already decided that it wanted to replace the venerable bolt-action M1903 Springfield with a self-loading rifle to provide its riflemen with rapid-fire capability. Although there were no shortage of talented designers looking to sign a contract, Hatcher had no way to tell who was serious about building a suitable rifle and who was just a hobbyist looking for an easy cash grant. Furthermore, the workable designs that already existed had significant problems—after all, self-loading infantry rifles had been produced in small numbers since before the First World War, but no design had been good enough for a major military to adopt it as standard. A round of trials in 1924 had failed to find a rifle that was entirely suitable, but those trials set the stage for what was soon to come.

Self-loading, or semi-automatic, rifles had been modestly popular among hunters and sport shooters for decades. The ability to fire multiple shots in rapid succession without having to manually cycle the action was highly valuable in the field, but the designs weren’t nearly adequate for military use. Engineers had tried to scale up civilian designs like the Reming­ton Model 8 and Winchester Model 1907 rifles, but they encountered serious problems: the rifles were usually some combination of heavy, inaccurate, fragile, unreliable, or expensive to produce. It quickly became clear that the standard .30 M1906 cartridge was much too power­ful and the military’s requirements too stringent for an existing design to simply be adapted for soldiers and Marines to use in combat.

Enter two men named John—John Pedersen and John Garand. Pedersen was a seasoned, experienced firearm de­signer who had developed several commercially successful firearms while working for Remington. During WW I, Pedersen de­signed a conversion device which allowed the M1903 Springfield to be quickly adapted into a semi-automatic pistol-caliber carbine; it was adopted by the U.S. military and saw limited use by war’s end. John Moses Browning once called John Pedersen “the greatest gun designer in the world;” high praise from anyone, let alone Browning. Throughout the 1920s, Pedersen had been working on prototype designs for a reliable, accurate self-load­ing infantry rifle. When the Army started looking for one, he saw this as the perfect opportunity to have his design adopted.

Compared to heavyweights like Pedersen, John C. Garand was a relative unknown in the firearms world. Hailing from Canada, he was a mechanical en­gineer by training and trade. Much of his career had been spent designing industrial machinery for factories, a skillset which would later come to serve him well. Garand’s experimentation in arms design began in the early 1920s, culminating in his submission of a self-loading rifle to the unsuccessful 1924 Army trials. Changes to the way military ammunition was manufactured rendered the basic operating mechanism unworkable, but by the early 1930s, John Garand had again produced a design worthy of proper mil­itary trials.

In 1932, the Army ran another trials program to select and adopt a self-loading infantry rifle to replace the Springfield. This time, the playing field was dominated by only two serious contenders: John Pedersen with his T1E3 rifle and John Garand with his new and improved T3E2, both in caliber .276. Pedersen’s de­sign used a toggle-delayed blowback mechanism with the breech locked by a sort of knee joint during firing. Garand’s design used a more conventional rotating bolt driven by a gas piston, which tapped expanding powder gases from the muzzle to operate the action. In the trials, John Garand’s rifle was found to be more robust and reliable than Pedersen’s and had one crucial advantage—it didn’t need lubricated ammunition. By virtue of its delayed-blowback operating mechanism, John Pedersen’s rifle would seize up and stop functioning unless the cartridges were lubricated, but its internal lubrication system increased complexity and allowed dust and grit to accumulate in the receiver, eventually causing malfunctions without careful cleaning.

The Army also had been testing the prototype rifles not in the standard cham­ber­ing of .30-’06, but in an experimental .276. Military analysts had already de­termined that the new cartridge had a number of advantages suiting it well for use in a self-loading infantry rifle. Somewhat smaller and less powerful, the cartridge placed less strain on a rifle’s operating components and produced significantly less felt recoil, allowing soldiers and Marines to fire more rapidly and accurately. Furthermore, the lighter weight and lower production cost of each round allowed men to carry more ammunition into the field and stay in the fight longer.

During the late stages of testing, Gen­eral Douglas MacArthur personally inter­vened to throw a proverbial wrench in the whole program. Wary of the additional complications a new infantry cartridge would pose for the U.S. military’s logistical network, MacArthur ordered that the .276 be abandoned immediately and all rifle development focus on the standard .30-’06. John Pedersen had designed his rifles around the .276 cartridge, but Garand had an ace up his sleeve—he had been working with the .30-’06 for longer. One of his crucial advantages was that he could readily redesign his T3E2 in .30-caliber, whereas Pedersen could not as easily scale his own designs up to fire the more powerful round.

This Garand prototype, designated T3E2, competed in U.S. Army trials beginning in 1932. It features a primitive “gas trap” system which taps expanding gases from the muzzle rather than the simpler and more efficient gas port arrangement found in most production M1 rifles.

Although Pedersen was known across the developed world for his design exper­tise, Garand’s rifle proved more effective and easier to manufacture. It was officially adopted as “U.S. Rifle, Caliber .30, M1” by the Army on Jan. 9, 1936.

The Marine Corps has traditionally been a little more conservative than the Army with adopting new rifles. Marine Corps brass in the late 1930s saw the rapid-fire capability of the Army’s new rifle as nothing more than a great way to waste ammunition and impede precision marksmanship. Despite their initial skep­ticism, the Corps ran a trials program of its own in 1940 to determine whether a semi-automatic rifle could be better than the venerable Springfield. They tested Pedersen’s and Garand’s designs along with a recoil-operated rifle designed by Marine reserve officer Melvin M. Johnson.

The Corps eventually decided to send some Johnson and Garand rifles to the Pacific theater to see how viable they were in combat. Both rifles, especially the Garand, quickly proved their worth against the Japanese in battles like Guadal­canal. The Japanese had long used the banzai charge as a way to dislodge enemy forces, and this tactic worked very well against Chinese conscripts armed with slow-firing Mausers. But against highly trained U.S. Marines with semi-automatic M1 rifles, a bayonet charge never stood a chance. Far from wasting ammunition, the sheer volume of fire provided by the new rifle allowed Marines to suppress enemy defenders and make rapid follow-up shots at moving targets.

Hearing positive feedback from Ma­rines who had used the M1 in combat, the Marine Corps formally adopted the rifle to completely replace the M1903 and began mass issuing the new rifle to Marines in the field in early 1942.

Recall that John Garand was a pro­duc­tion engineer with a great deal of ex­perience designing factory equipment. This background allowed him to design the rifle for ease of production as well as the machines that would perform each operation. This proved to be a key factor in giving the United States an edge during World War II. They could manufacture and field in the mass quantities needed, something that tripped up the likes of the Soviet Union and Nazi Germany with their own self-loading rifle programs.

With America’s industrial might at their backs, riflemen of the United States Ma­rine Corps used the M1’s fire superiority to fight their way all the way across the Pacific. Marines carrying M1s raised the American flag over numerous islands, and when war broke out on the Korean pen­insula in 1950, soldiers and Marines picked their M1 rifles back up and went to go fight.

Warfare in the bitter Korean winter is very different from fighting on the hot, humid islands of the South Pacific, but John Garand had designed his rifle to function in extreme cold as well as heat. During the Battle of the Chosin Reservoir in 1950, Marines found that their M1s still functioned perfectly fine, except for one thing—lubrication. All firearms require proper lubrication in order to function reliably, and the M1 is no exception, but the natural oil in service at the time had an unfortunate tendency to thicken and gum up in the extreme cold temperatures. Undeterred, Marines simply stripped all the lubricant out of their M1s and ran them bone-dry—and the rifles kept on working.

Even after serving in two wars, the M1 kept soldiering on. Years of work on modifying and improving the rifle’s base design culminated in the adoption of the M14 in 1957. Despite the external dif­fer­ences, every M14 and variant thereof can trace its lineage directly back to the M1. Despite its official replacement, the M1 itself endured in frontline service. It dutifully guarded the inner German bor­der and other hotspots around the world until 1961 when the last examples were finally phased out and sent back to Spring­field for refurbishment and storage.

During the 1950s and beyond, militaries on six of the seven continents fielded M1 rifles received from the United States as military aid. Even after they were taken out of American service, M1 rifles gained a new life among civilian marksmen—many of them soldiers and Marines who had carried them in combat. Through the Office of the Director of Civilian Marksmanship (DCM), managed by the War Department, members of shooting clubs across the country could purchase refurbished military surplus rifles that were no longer needed by the U.S. mil­itary. To this very day, the DCM—now known as the Civilian Marksmanship Pro­gram—sells original 1940s and 1950s production M1 rifles for match shooting.

Few historic military arms have garnered such enduring popularity as the M1. This rifle, revolutionary for its time, is still held in high regard; its influence on tactical doctrine, marksmanship, and later firearm designs is felt in the modern day. Marines at Tarawa, Saipan, Iwo Jima, Inchon, Outpost Vegas and hundreds of other battlefields didn’t know how famous the rifle would become, of course. All they cared about was whether it worked, and as the record reflects, it did indeed.

Editor’s note: Special thanks to Jonathan Bernstein at the National Mu­seum of the Marine Corps and Geoffrey Roecker of MissingMarines.com for technical research and assistance with photos.

Author’s bio: Sam Lichtman is a college student and licensed pilot. He works part-time as a manager at a gun store and occasionally contributes content to Leatherneck. He also has a weekly segment on Gun Owners Radio.