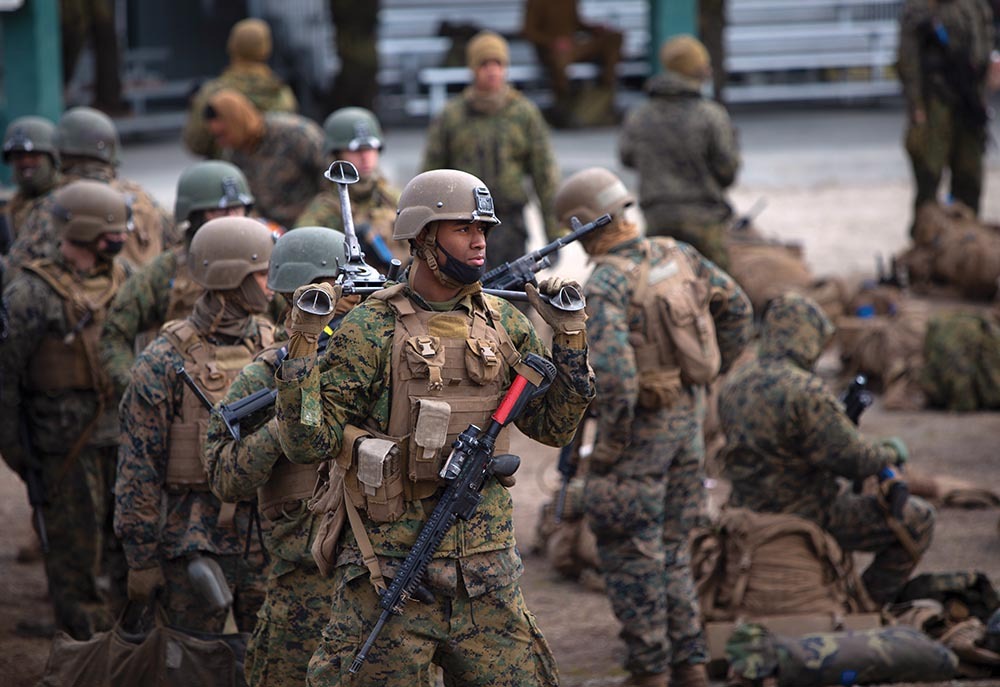 An Open Message to the Enlisted Infantryman

The infantry Marine and the greater Ground Combat Element have been, is, and will remain the main effort of the United States Marine Corps. No single element of the MAGTF wins the war because we are a combined arms team capable of integrating every command and potential new fighting domain, but the infantry remains central.”
SgtMaj Troy E. Black
Sergeant Major of the Marine CorpsFrom Iwo Jima to Pusan; Khe Sanh to Kandahar; Fallujah to Marjah, one thing has remained constant: Infantry Marines were tasked to seize and hold key terrain. The “in order to” may change, but tomorrow’s battlefield still requires infantry Marines to seize and hold key terrain. This is why the infantry is and remains the main effort.

In the last three years, there has been a lot of discussion regarding the transitions that the Marine Corps must go through in order to remain ahead of the competition and a lethal warfighting organization, able to respond to all manners of crises. The Marine Corps recently began fielding modernized and technologically advanced platforms like the F-35B variant of the Joint Strike Fighter, the CH-53K heavy lift helicopter, the AH-1Z and UH-1Y light attack helicopters, the Amphibious Combat Vehicle, improved communication systems, and updated pre­cision strike capabilities, just to name a few. These advancements are all designed to improve the lethality of ground forces engaged in close combat.

In the face of these advancements, one thing remains unchanged: the infantry must seize and hold key terrain. Without this essential contribution to the warfighting effort, nothing else matters.

History demonstrates this has always been true for the Marine Corps and remains true even in our newest concepts of seizing and holding expeditionary advanced bases in support of larger joint force and naval campaign plans. When nuclear weapons were introduced, infantry formations were deemed obsolete and no longer necessary. However, infantry formations are indeed deployed to deter the use of such strategic weapons.

History would argue that the infantry, too, is a strategic weapon of deterrence. Advanced technology alone will not win the future fight. Warfighters win battles when their boots are on the ground, armed with little more than a rifle, and look their adversary in the eye and say, “Not on my watch.”

Infantry Marines do not fight alone, however. They are often the first or last line of defense, where the stakes are higher, operating in full view of the enemy. They are asked to fight the country’s battles like no other; they do more with less and always come out on top. Infantry Marines pride themselves on being among the first to run to the sound of gunfire and engage the enemy. Considered fearless yet unassuming, they don’t boast or brag but just work hard for the fellow Marine to their right and left. 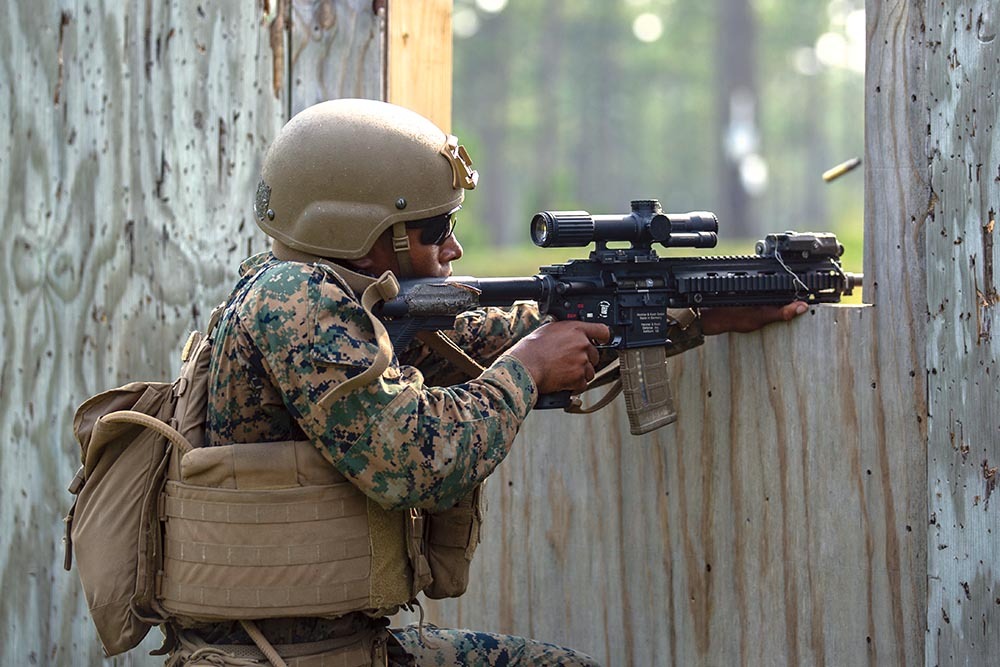 Pvt Dahe C. Gibbs, a student with the School of Infantry-East, lays down suppressive fire during the Infantry Marine Course on MCB Camp Lejeune, N.C., on July 22, 2021. (Photo by LCpl Isaiah Gomez, USMC)

At times, infantry Marines are often called knuckle draggers with bad attitudes and boorish behavior who are always looking for a fight. Yet, they live for the moment when the country calls. They deliver tactical victories to larger operations and strategies. Following in the footsteps of their Marine Corps forebears they are willing to sacrifice themselves for their Marines.

They fight the enemy with every weapon at their disposal to include their calloused, bloody, bare hands if needed. The Marine infantry refuses to quit or lose in the face of adversity. They will neither flag nor fail.

Infantry Marines have one simple demand of themselves—to be ready for the next battle—and they know that hard, realistic training is what they need to prepare for that certainty. More importantly, it is what they want, all part and parcel of the Spartan life they chose. Infantry Marines have pride in “the suck,” pride of being an infantry Marine, pride in knowing that if something happens in the world that they will be the ones that get to make things right, they are the ones that stand tall and say “I got this” as they move forward into the fight. 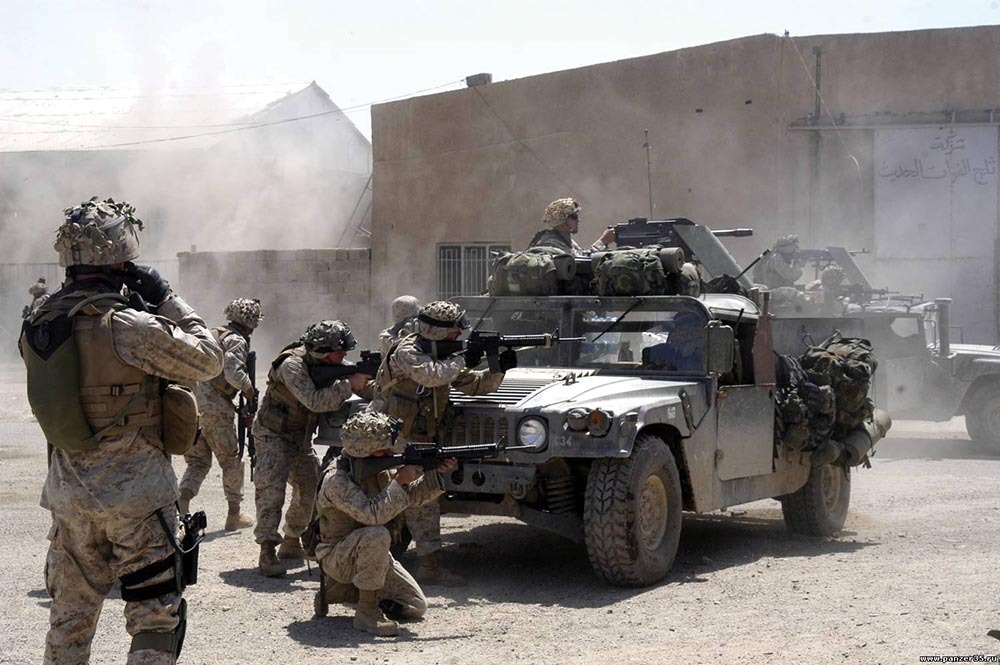 They joined for the esprit de corps, to be the ones that protect others, longing to be at the tip of the spear when the decisive blow is landed.

Let this serve as a reminder to all infantry Marines: stand up tall, lift your chin, stick out your chest, and remind the world around you where the Marine Corps’ center of gravity is. The infantry is the essential element of Marine expeditionary forces and the reason this country can sleep well at night without fear.

The next generation’s infantry formation is more lethal than ever. These formations are already equipped with a rifle that delivers better accuracy and range, better optics, vastly improved night vision capability, targets that simulate enemy movement, and lighter gear that provides both better protection and improved mobility. 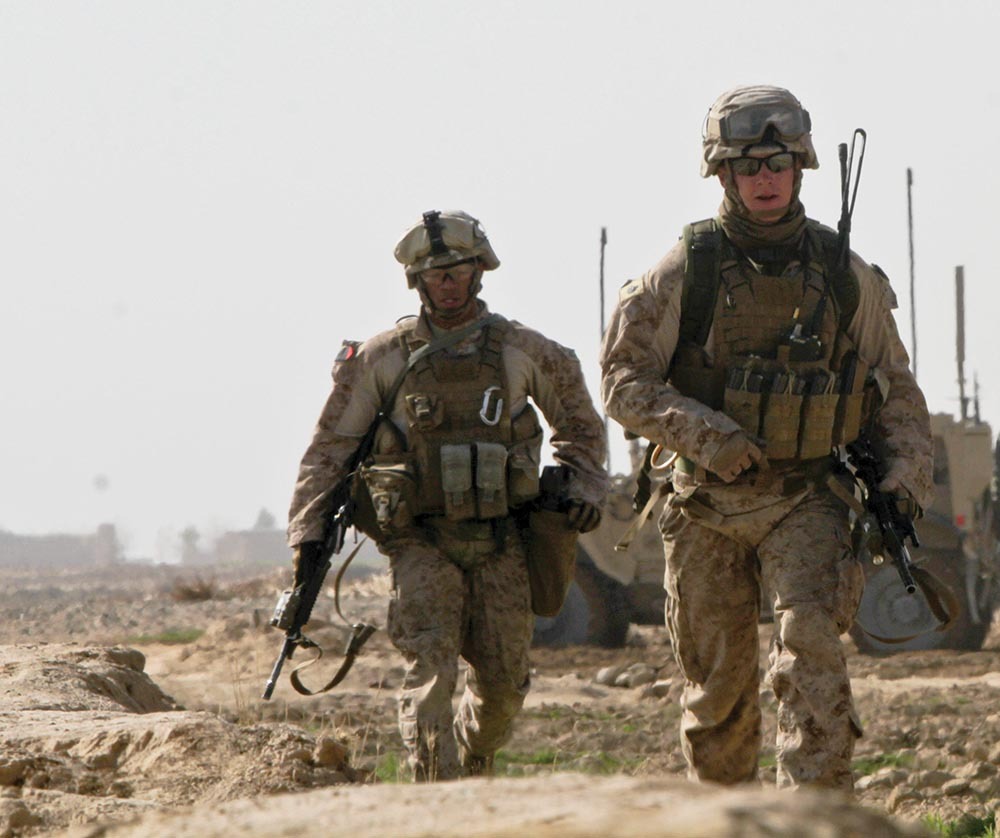 Sgt Bryan Early, a squad leader with 1st Bn, 9th Marine Regiment, crosses a field with a fellow Marine while under fire in Helmand Province, Afghanistan, on Dec. 22, 2013.

The service is also investing heavily in its most precious resource—the human—and holistic Human Performance programs. The new Infantry Marine Course is not just improving the quality of Infantry Marines reporting to the fleet, but it’s also improving the quality of the small unit leader that trains and leads them. This approach will very soon lead to new leaders courses that will improve all echelons of small unit leaders’ abilities to lead formations in all environments to include the critical and challenging littorals.

The Marine Corps is far from finished with this transformation. Future infantry Marines can expect to see improved as­sault/anti-armor capabilities, small UAS (Unmanned Aircraft Systems), organic precision fires, next generation tactical communications, and the tools to integrate all of these increased capabilities. These assets are being fielded all the way down to the smallest tactical formations. Those formations must be led by our best and most-capable young leaders. This is what drove the service-wide change of how we evaluate, promote and empower our young leaders. 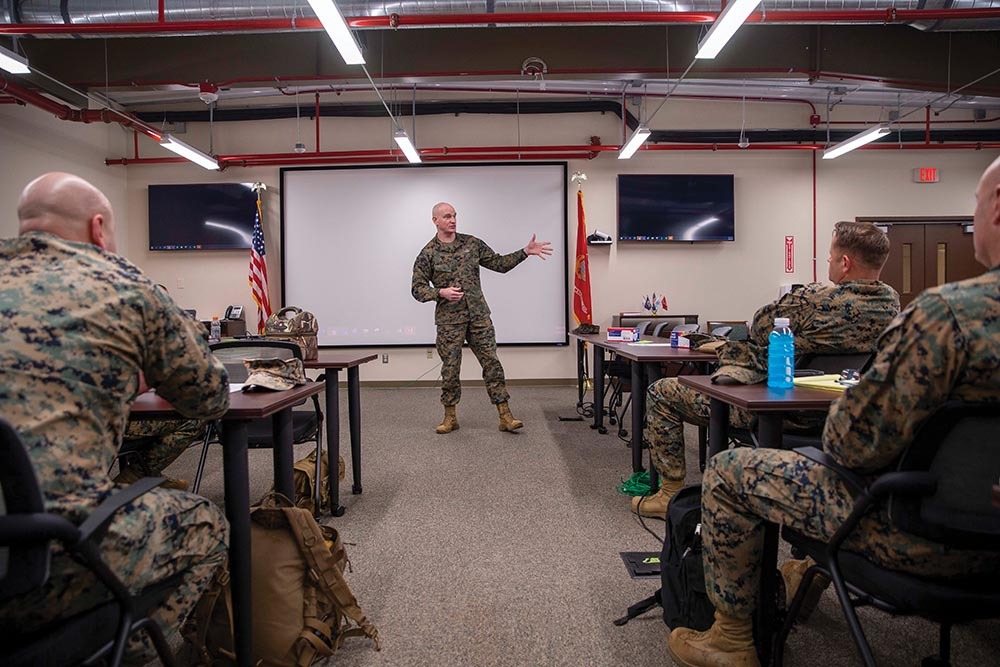 This talent, developed and refined, must be kept within our ranks. This is a steadfast truth. These small units must, as they have always been, be led by the sturdy professionals and practitioners of war who call themselves The Few and The Proud to remain the most ready when our nation is least ready. This is how we meet the Commandant’s drive for a more capable and better trained and educated force.

Future infantry formations require educated and exper­ienced leadership from its enlisted ranks. The Operations Chiefs, the most senior enlisted infantry leaders, were tasked by both CMC and the SMMC at the recent GCE Operations Chief Symposium to find and pursue better ways to keep our best infantry Marines in our ranks.

Infantry Marines of the future should expect to see improved opportunities to shape where and how they serve, to improve their quality of life through tough and realistic training, additional resources to take better care of their families, and rewards for continuing to answer the call.

Make no mistake, the nation will call again and need her Marines to go forward. When that happens, experienced leaders are needed in that formation—experienced infantry Marines who have been honing their craft in the swamps of Camp Lejeune, the deserts of Twentynine Palms, the hills of Camp Pendleton, the jungles throughout the Pacific, and everywhere in between, preparing their squads and platoons. Marines never have the luxury of choosing the time and place of answering the nation’s call, but no matter the clime or place, they always answer and so it will be for our future infantry formations. 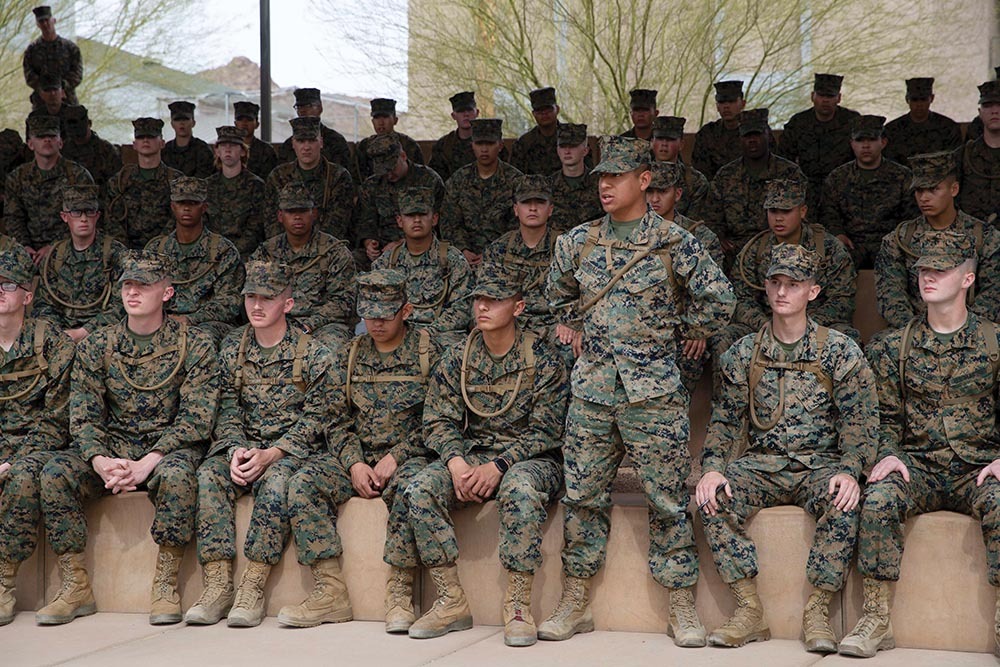 “I need you for tomorrow’s fight. The young men and women you are training right now need an experienced leader, not the next Marine up. Don’t leave it to someone else. Be a part of the change that will allow us to be great for another century. You are the main effort and our nation and our Corps need you. Seize and Hold!”