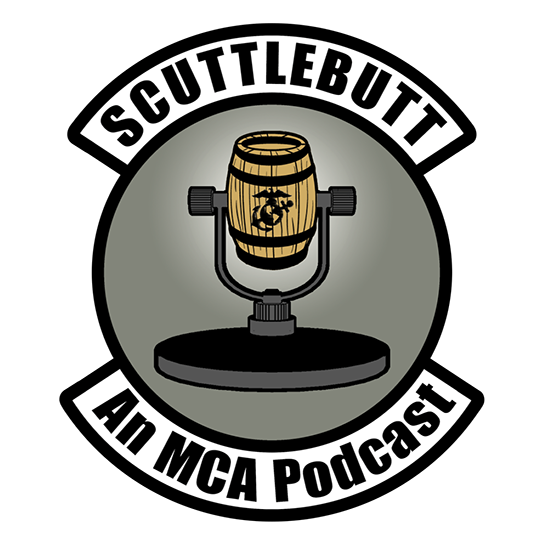 Is Newest Addition To MCA’s Library of
Audio Content

By Sara W. Bock
When Vic Ruble joined the staff of the Marine Corps Association last year as creative content coordinator and deputy editor of Marine Corps Gazette, he knew he’d be involved in the behind-the-scenes development of the organization’s first-ever podcast. What he didn’t count on was that he would, by default, end up as its host. Initially out of his comfort zone perhaps, but to anyone listening, the role seems a natural fit for the former amtrac officer, a prior enlisted Marine with numerous deployments to Iraq and Afghanistan under his belt. Ruble retired from the Corps as a major in 2018 and then went on to earn a master’s degree in creative writing from American University in Washington, D.C.

With a heavy emphasis on the art of storytelling, “Scuttlebutt: An MCA Podcast” launched its first episodes in September 2021, taking its place among the professional association’s wide array of multimedia resources, which includes audio articles from its flagship publications Leatherneck and Marine Corps Gazette; an impressive “Corps Voices” collection featuring interviews with some of the most revered Marines in history, including Lieutenant General Lewis B. “Chesty” Puller; and recordings of guest speakers from MCA’s professional awards ceremonies and events.

The “by Marines, for Marines” podcast, which releases new installments weekly and is recorded on-site at the MCA headquarters aboard Marine Corps Base Quantico, Va., has quickly gained subscribers, with more listeners tuning in to each subsequent episode. Ruble and the rest of the “Scuttlebutt” production team, which includes MCA  Digital Projects Manager Nick Wilson, who had already set up a recording room and procured the necessary equipment before Ruble came on board; Marine Corps Gazette associate editor William Treuting, who recently earned a master’s degree in history; and seasoned journalist and Leatherneck deputy editor Nancy Lichtman, hope that the informal, conversational format they’ve created will invite listeners to learn from the personal stories of others as well as think critically about current events that impact today’s Marines. The podcast comprises a mix of interviews with high-profile guests and conversations amongst the “Scuttlebutt” team as they discuss the interviews, relevant issues and various aspects of Marine Corps history.

From hot topics like COVID-19 vac­cination rates among the ranks and the arrival of Afghan refugees in the U.S., to the implementation of the Commandant’s Force Design 2030 and the Corps’ newly announced talent management initiative, “Scuttlebutt” covers it all. But its primary objective is to showcase the stories and experiences of its diverse range of guests who have agreed to spend an hour or two of their time to join in the discussion. 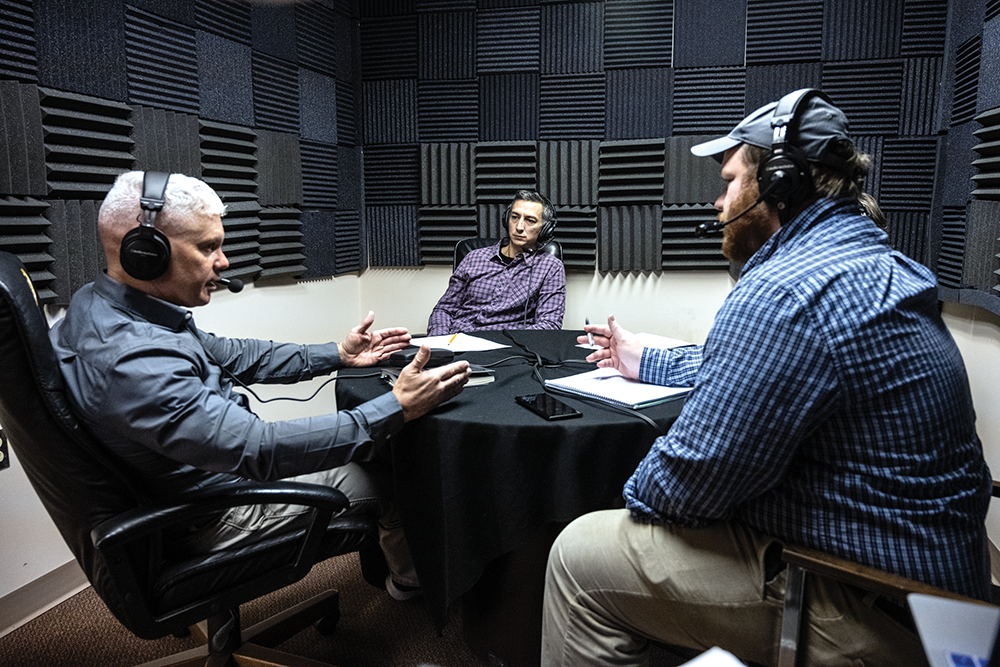 Retired Colonel Andrew Milburn, left, author of “When the Tempest Gathers: From Mogadishu to the Fight Against ISIS, a Marine Special Operations Commander at War,” chats with Vic Ruble, center, and Nick Wilson, right, during the recording of “Scuttlebutt” Episode 16, Jan 12.

“The conversations we will have will explore some of the themes and lessons our guests have taken with them to write their stories, so that you, the listener, will have more tools in your kit when it comes time to write yours,” Ruble said in the promotional “teaser” episode of “Scuttlebutt,” adding that his interviews with podcast guests would be akin to “coffeehouse” chats with friends.

Aptly named in a nod to the Marine Corps’ naval roots—the term “scuttlebutt” can be traced back to an early 1800s term for the cask containing a ship’s daily supply of drinking water, inviting conversation among those gathered around it, and later evolved into a slang term for rumor, gossip or “water cooler talk”—the podcast is informal, engaging and often brings out the witty side of its producers.

Ruble is adept at facilitating relaxed, congenial conversations with podcast guests, who have thus far included names like Marine veteran Miles Vining, who authored the 2020 book “Into Helmand With the Walking Dead”; actor Geoff Stults, who spoke about portraying military servicemembers in film and his work with the Merging Vets and Players organization; and retired Marine Sergeant Major and Navy Cross recipient Justin LeHew, who serves as the chief operating officer for History Flight.

“My goal for the podcast is for it to be a place where stories and narratives outside of the mainstream military mediums are featured and heard,” said Ruble. “Just because someone isn’t a Medal of Honor winner or wasn’t part of some badass special forces task force—which we have some of those folks too—doesn’t mean that what they did and how they contributed was insignificant. I would like it if our listeners got the feeling that ‘Scuttlebutt’ features stories that highlight the many nuances of the Marine Corps and that everyone’s story matters. Oftentimes, it’s the stories that we don’t know about that matter the most.”

The burgeoning podcast and the rest of MCA’s audio offerings are part of an ongoing effort to expand the association’s reach and provide content that goes beyond traditional print media. This is not to diminish the role of the iconic Leatherneck and Gazette, which have been telling the Marine Corps story and inviting professional discourse for more than a century, but rather to enhance and support those efforts.

Justin LeHew, a retired Marine sergeant major, was the first guest on “Scuttlebutt.” His interview, which spans two episodes, covers a variety of topics ranging from advice he received during his Marine Corps career to his work in MIA research, recovery and repatriation as chief operating officer of History Flight.

Not only does audio content provide the consumer with tone of voice, inflection and emotion, which are often difficult to adequately capture in the written word, but its format also allows for multi-tasking, such as listening while driving, exercising or doing household chores. This is particularly desirable among those whose busy schedules don’t necessarily allow them time to sit and read a magazine or book but who want to absorb new information, perspectives and stories.

“We want to be both an entertaining storytelling destination and a somewhat professional resource peering behind the scenes at different aspects of the Marine Corps,” said Wilson. “We were looking to reach an audience that the MCA has struggled to keep in contact with over the years, that being the younger ‘25 to 45’ crowd. Which, as it just so happens, is the crowd that listens to podcasts.”

Podcasts like “Scuttlebutt” have soared in popularity in recent years across a broad range of demographics. According to Edison Research, approximately 80 million Americans, or 28 percent of the U.S. population over the age of 12, listen to podcasts each week, which is a 17 percent increase from those who listened in 2020—and this group also is more diverse than ever before. Additionally, the research company’s 2021 Infinite Dial study found that 62 percent of the population are weekly online audio listeners. It seems safe to conclude that these numbers will only continue to rise.

“The younger generation of Marines is less inclined to read a magazine than their predecessors, so with this format, we can reach those young men and women,” said Lichtman, who says she views the podcast as an audio magazine of sorts, employing some of the same concepts she’s used during her career in print media as she assists in its development. “Ideally, the podcast discussions will lead people to pick up a magazine, either the physical copy or the digital format, to take a deeper dive into Marine Corps history.”

She believes that the podcast format, which allows for a free flow of ideas between guests and hosts, fills a different need than either Gazette or Leatherneck, and helps further the association’s mis­sion to develop leaders and to expand awareness of the traditions, history and spirit of the Marine Corps.

Lieutenant General Charles G. Chiarotti, the association’s CEO, agrees with this sentiment, stating that the “Scuttlebutt” team’s efforts contribute directly to the “rich discussion” that the association seeks to encourage among Marines and friends of the Corps.

“Through the research that they do to prepare for each podcast, to their casual on-air demeanor, they are able to uncover the more humanistic aspects of a story or personal ac­count,” said LtGen Chiarotti, who was the featured guest on the “Scuttlebutt” Episode 6, which was released in conjunction with the 246th birthday of the Corps. “They reach a different level of understanding of an experience or a story than most are willing or able to provide through the written form,” he added.

During his appearance on the podcast, LtGen Chiarotti, who was born and raised in Italy, discussed his unconventional path to becoming a Marine, as well as the importance of professional development and what his priorities are as he takes the helm of MCA.

Prior to the recording of each episode, Ruble writes up a pre-interview show setup with discussion points and questions, and the podcast team meets to give suggestions and feedback. The result is a well thought-out, meaningful conversation that explores what it means to serve and to claim the title “Marine.” 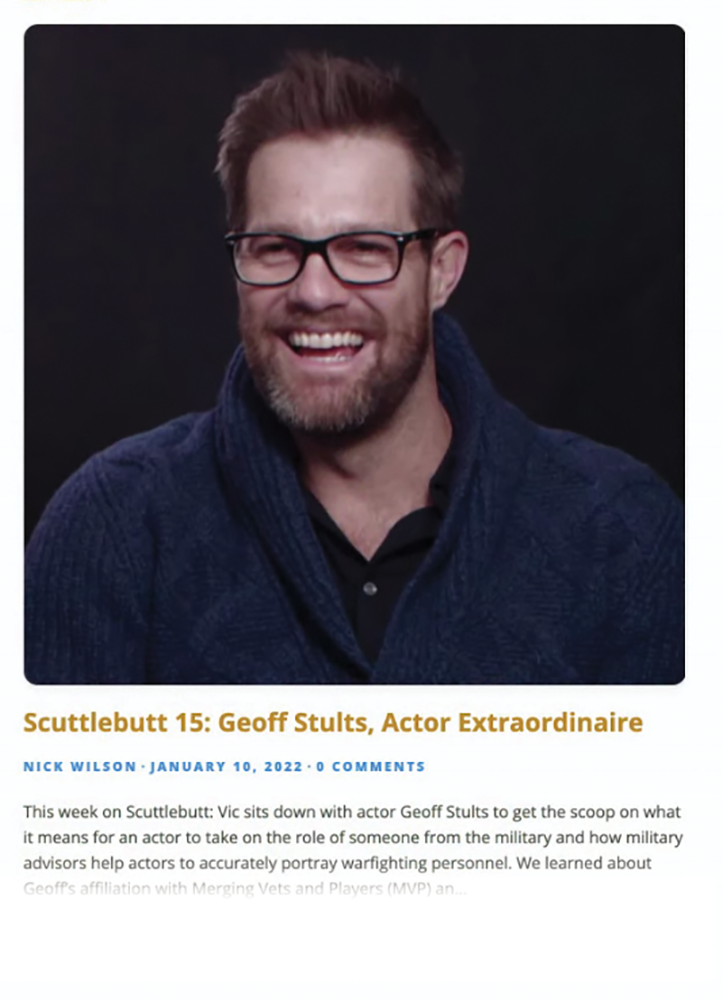 On the MCA website, “Scuttlebutt” listeners can read synopses of each available podcast episode. The team continues to book high-profile guests who are willing to share their own personal experiences and perspectives.

“All of our guests have brought their own unique perspectives and personalities to this project,” said Ruble. “Some have been fun because the guest was charismatic, or I already had a relationship with them, so it really was just two friends hanging out. Others have been super informative, and I’ve just been in ‘receive mode’ the whole time as if I were a listener.”

Treuting, whose historical focus is on American military history, hopes to see “Scuttlebutt” attract both military-affiliated and civilian listeners alike and to serve as a springboard for additional audio and visual content produced by the MCA in the future.

“I want our podcast to be an entryway for civilians to become interested and invested in the Marine Corps and to help diminish the cultural/social gap between civilians and the military,” Treuting said.

There’s something for everyone among the audio resources available on the MCA website, whether it’s an oral history interview of General Frank E. Petersen, the Marine Corps’ first Black aviator, in which he describes a racial incident that occurred at Marine Corps Air Station El Toro, Calif., in 1953, part of the “Corps Voices” collection, or a speech given by Gen James N. Mattis, USMC (Ret), during an October 2019 MCA professional event. Popular Leatherneck articles, many of which are read by the authors themselves, also are easily accessible. And of course, “Scuttlebutt” is sure to attract an audience both young and old, from a variety of backgrounds.

“If someone has any passing interest in the Marines, I think they’ll find a lot to like in Scuttlebutt,” Wilson said. “I only see growth in the future, and it’ll be fun to be a part of it.”