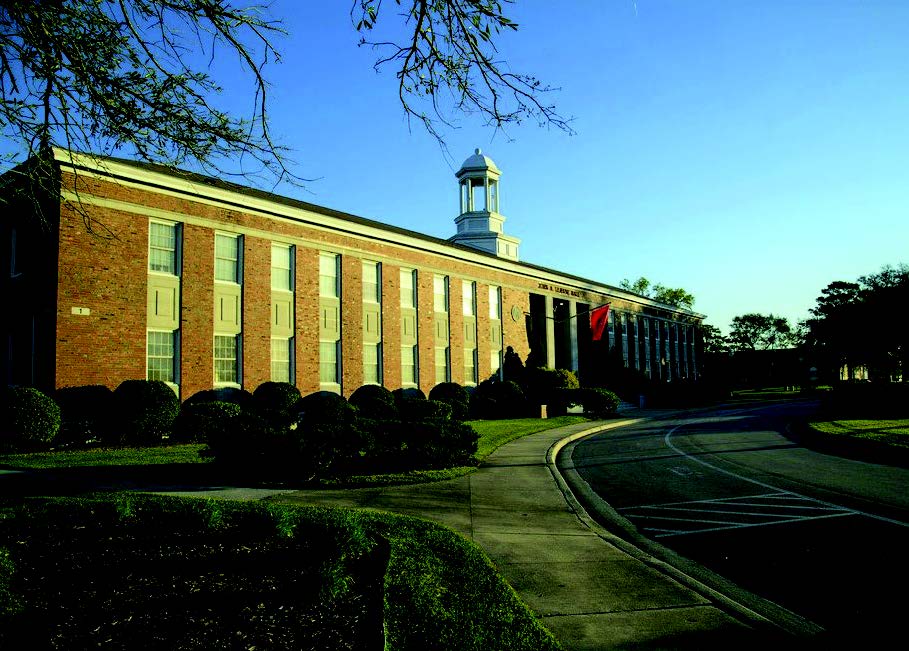 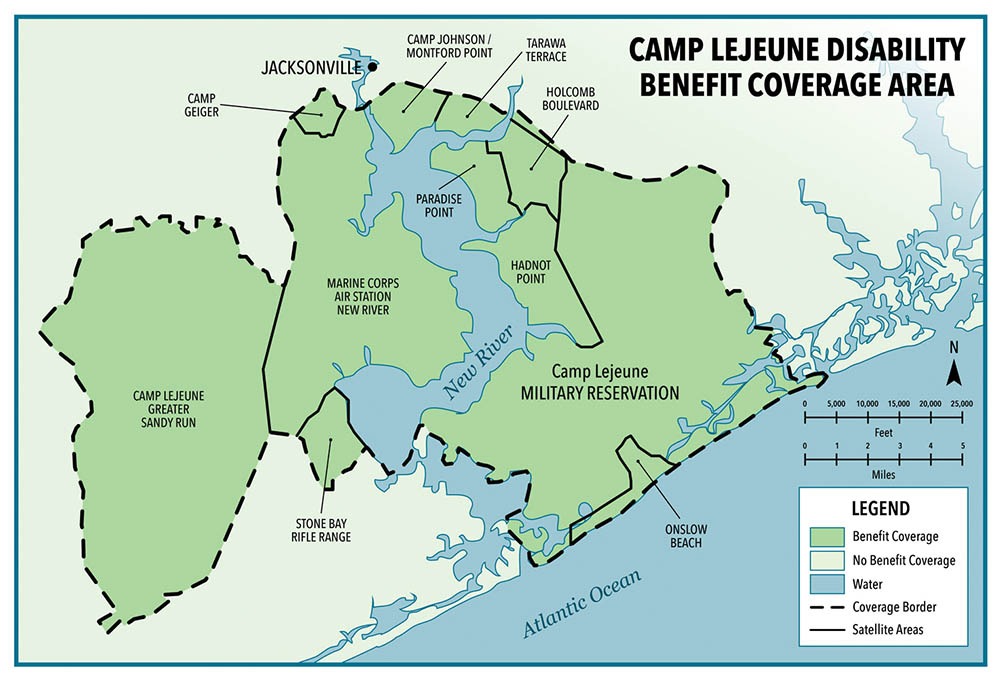 On March 3, House Resolution 3967 advanced through the U.S. House of Representatives with a vote of 256-174. This bill encompasses several major provisions including areas of burn pits exposure in Iraq, Agent Orange exposure in Vietnam, and contaminated water at Camp Lejeune, N.C., that would potentially allow veterans, civilians and family members who have experienced health effects from toxic exposure to file for relief from harm.

As part of the overall PACT Act, the provisions of the “Camp Lejeune Justice Act of 2021” are of particular interest to Marines and their family members who “resided, worked, or otherwise exposed (including in utero exposure) to water aboard Marine Corps Base Camp Lejeune, N.C., from August 1, 1953, to December 31, 1987, for not less than 30 days.” Until now, laws particular to the state of North Carolina have prevented such motions.

The bill goes further into detail, stating that while the burden of proof for all claims is the responsibility of the petitioner, “studies conducted on humans or animals, or from an epi­demi­ological study, which ruled out chance and bias with reasonable con­fidence and which concluded, with sufficient evidence, that exposure to the water described in subsection A is one possible cause of the harm, shall be sufficient to satisfy the burden of proof described.” The full text of the bill is available at https://www.govtrack.us/congress/bills/117/hr2192/text.

According to the VA, since 2011, just 17.3 percent of disability claims submitted in response to water con­tamination at Camp Lejeune have been approved.

For Tara Craver, the bill means more than an opportunity for financial restitution. Her husband, Karle Craver, was a Marine veteran who had been stationed at Camp Lejeune. When he was diagnosed with esophageal cancer in 2014, it was the first time either of them became aware that he was potentially exposed to toxic chemicals while serving his country.

Tara and Karle found out about Camp Lejeune con­tamination concerns when they went into a VA office to apply for benefit assistance for his healthcare shortly after diagnosis.

“There was a little sign on the desk that said something about Camp Lejeune. So, I asked, ‘What’s this about Camp Lejeune?’ Someone came out of the office to talk to us. That’s how we found out,” Tara Craver recalled.

Esophageal cancer is one of the conditions considered eligible for care by the VA in regard to claims associated with Camp Lejeune. Due to this, Tara and Karle were told that his claim would be expedited for treatment. A month after registering, they received a letter stating he had been scheduled for a doctor’s appointment a month away.

Sadly, Karle Craver lost his battle with cancer on the very day he was scheduled to attend that appointment. Tara, despite having no income, has dedicated her life to raising awareness of Camp Lejeune contamination. She has participated in dozens of interviews, founded the Facebook Group “Camp Lejeune Victims ‘The Faces,’ ” which now has more than 2,800 members, and embarked on a 10-state awareness campaign, standing outside VA hospitals with signs and information regarding the contamination.

After Karle’s passing, Tara also found herself struggling to qualify for survivor benefits. After multiple denials, she was awarded benefits in 2017, deemed retroactive to 2014. While she very nearly lost every­thing, including her home, the money was of less importance to her than raising aware­ness to others. “If we didn’t know,” she says, “how many others didn’t know? Money can’t bring back what we lost.” 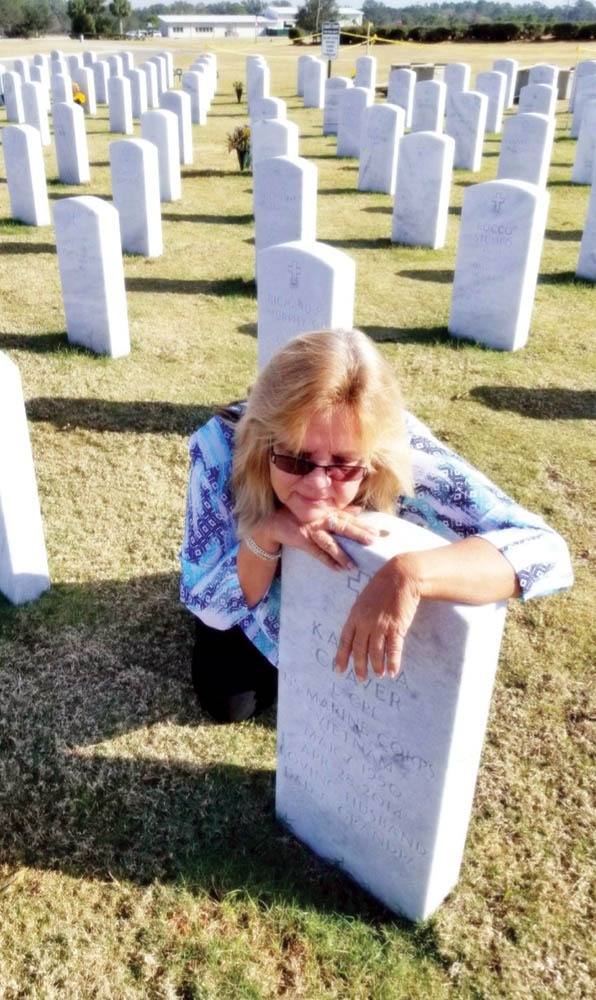 Tara Craver, left, visits her husband’s gravesite in 2017. Karle Craver, above, was diagnosed with esophageal cancer in 2014 after being exposed to toxic chemicals at Camp Lejeune decades earlier. 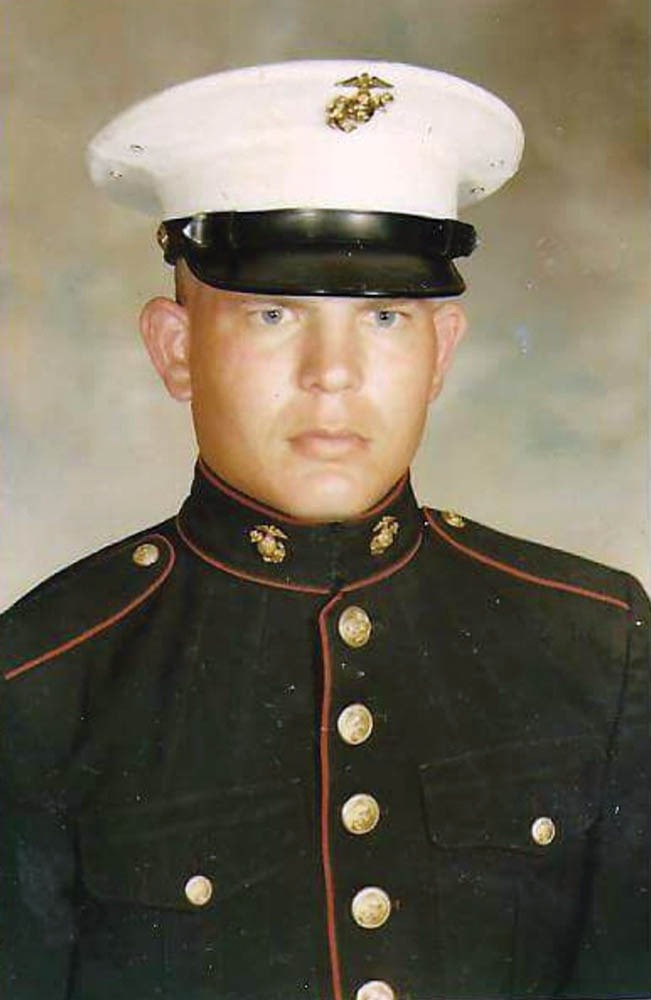 Tara Craver, left, visits her husband’s gravesite in 2017. Karle Craver, above, was diagnosed with esophageal cancer in 2014 after being exposed to toxic chemicals at Camp Lejeune decades earlier.

For others, it’s difficult to remember how their loved ones struggled with illness-related financial difficulty and not feel some measure of relief that compensation beyond medical care or disability might finally be available. Jill Dilgard, whose father, Larry Lee Steen, was a Marine veteran once stationed at Camp Lejeune, remembers her father’s struggle to remain financially independent while battling multiple cancers and cardiovascular ailments. She was still a freshman in high school when her father had his first heart attack at the age of 45.

His three children all worked together to help their father despite his protests. Dilgard describes him as a proud and loving man, who, after winning his fight with prostate cancer, had a chemotherapy pump implanted so that he could continue to work through treatment for prostate cancer, following treatment for aggressive bladder cancer. She describes him as a man who still embodied everything the Marine Corps stands for: loyalty, strength and determination. Despite his multiple diagnoses, he maintained a positive and capable mindset, making the decision to receive hospice care when it became clear his cancer had metastasized and was incurable.

Much like Tara and Karle Craver, Dilgard’s father was unaware of his potential exposure until 2017, when a family friend brought it up in conversation. While he did apply for VA assistance, his application had not been approved before he died seven months later.

Dilgard supports financial recognition for affected veterans or their families beyond healthcare and disability if their claims are accepted. “They don’t cover the devastating and catastrophic effects on the finances. You pay co-pays, medication; you’re too sick to work. You have to go to specialized units for care. The cost of radiation and chemotherapy are extreme.” She is currently a Facebook group administrator for “The Faces” and shared Tara’s sentiments on awareness. “If we had known, he could have gotten preventative screenings. Maybe it would have been caught earlier.” 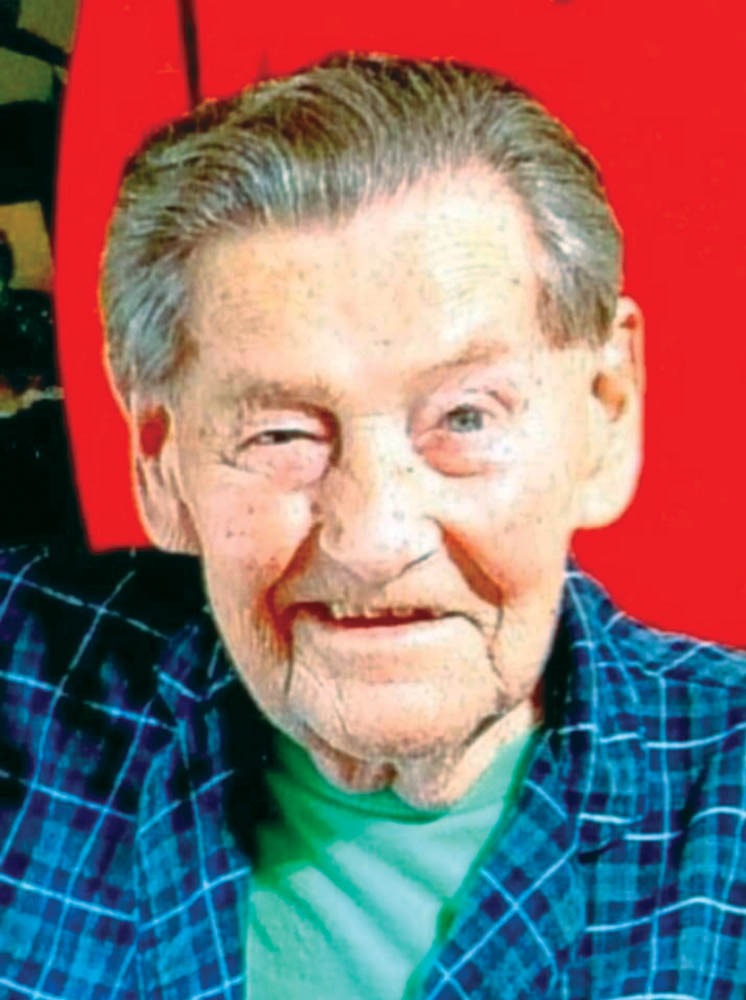 Still others are living the reality of illnesses they believe are related to their time at Camp Lejeune. Sam Maynard, a Marine veteran who was stationed there for four months in 1986, is one such veteran. He volunteered for service at 19, he says, out of high school. He attended a seven-week school at Camp Lejeune, with an additional two months before and after his training began, before being stationed in Hawaii. He remembers that while in training to become an electrician, he became so dizzy he fell off a 30-foot training pole. He noticed a physical decline while there.

“I was in such good shape coming from boot, you couldn’t stop me. By the time I left, I was a wreck,” Maynard said, adding that while there, he developed skin boils and his 3-mile run time increased from 18 minutes to 24 minutes.

It wasn’t until about 16 years later that Sam suffered a stroke that changed his life. He’s hazy on the details, but his surgeon told him that he had a stroke during an operation, which led to partial paralysis. Today, he’s lost one foot and is in a battle to keep his other while also experiencing neurological effects and recurring infections. While he does receive VA healthcare, his disability application has been rejected 10 times as his medical concerns do not meet any of the currently recognized Camp Lejeune water contamination-related conditions.

His only income is Social Security, which he says has affected his life profoundly. “I don’t want to be disabled,” he says. “Believe me, I would rather work. Before I got sick, I was making six figures. I’ve lost everything; I’ve sold everything. I didn’t even go to my daughter’s wedding because I feel like if I can’t even give her a gift, I shouldn’t go.” He said that he’s in danger of foreclosure on his home and can’t understand the situation he’s in today. “I signed on the dotted line that said they’d take care of me if anything happened to me. Not from what I’ve seen.” 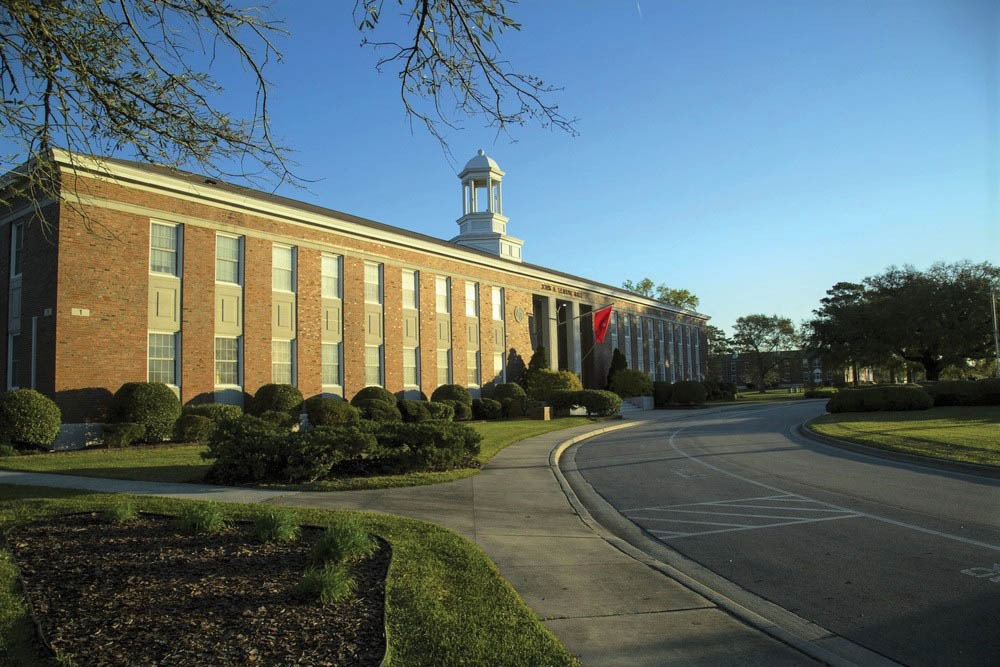 The Camp Lejeune water contamination issue has become an area of focus for the VA and leaders of the North Carolina base, the headquarters of which is shown above. The issue became public in the mid-1980s when it became apparent that wells supplying water to the installation were polluted.

The subject of the Camp Lejeune water contamination has been a focus for the VA since the mid-1980s, when it became apparent that wells supplying water to the installation were polluted. After investigation, it was concluded that there were two main sources for the pollution: an off-base dry cleaner which disposed of chemicals in a septic tank very near one of the well reservoirs, and a broken fuel tank.

Following an investigation, Camp Lejeune was listed as an Environmental Protection Agency Superfund site and has since undergone decades of remediation efforts.

In 1999, questionnaires were sent to former Camp Lejeune residents by the Agency for Toxic Substances and Disease Registry (ATSDR), but it’s unknown how many of the estimated 1 million individuals who had potentially been exposed received this letter.
In 2018, the VA expanded its review of chemical exposure in relation to Camp Lejeune in an attempt to amend regulations and establish presumptions of service connection for certain conditions in addition to the 15 conditions already deemed eligible in connection with the ATSDR. At the time of press release, veterans with potential exposure were encouraged to contact their local VA healthcare facility or visit https://publichealth.va.gov/exposures/camp-lejeune/ to learn more about the Camp Lejeune water issue and to sign up for email notifications of updates as they occur.
ATSDR has also established a community assistance panel (CAP) for Camp Lejeune. Affected community members are encouraged to contact CAP with concerns regarding exposure. More information can be found at https://www.atsdr.cdc.gov/sites/lejeune/capmeetings.html.

Also known as the “Honoring Our Promise to Address Comprehensive Toxics (PACT) Act,” H.R. 3967 carries significant importance to all who have served or currently are serving.

Also included in the bill are revised considerations for exposure to Agent Orange and burn pits, which would require the expansion of presumptive related illness from exposure to various toxins to 23 conditions. The bill would further require the VA to provide training and outreach operations to affected veterans, as well as DOD-based training to active-duty personnel on the dangers of exposure to per- and polyfluoroalkyl chemicals (PFAS) and increasing registration eligibility for PFAS-exposed veterans.

Another change proposed is an extension of VA medical care eligibility for post-9/11 veterans from the current five years to 10 years post-military separation, as well as a requirement for the VA to create a provision allowing presumption of exposure to radiation for veterans who participated in cleaning operations in Palomares, Spain, and Enewetak Atoll following nuclear accidents. 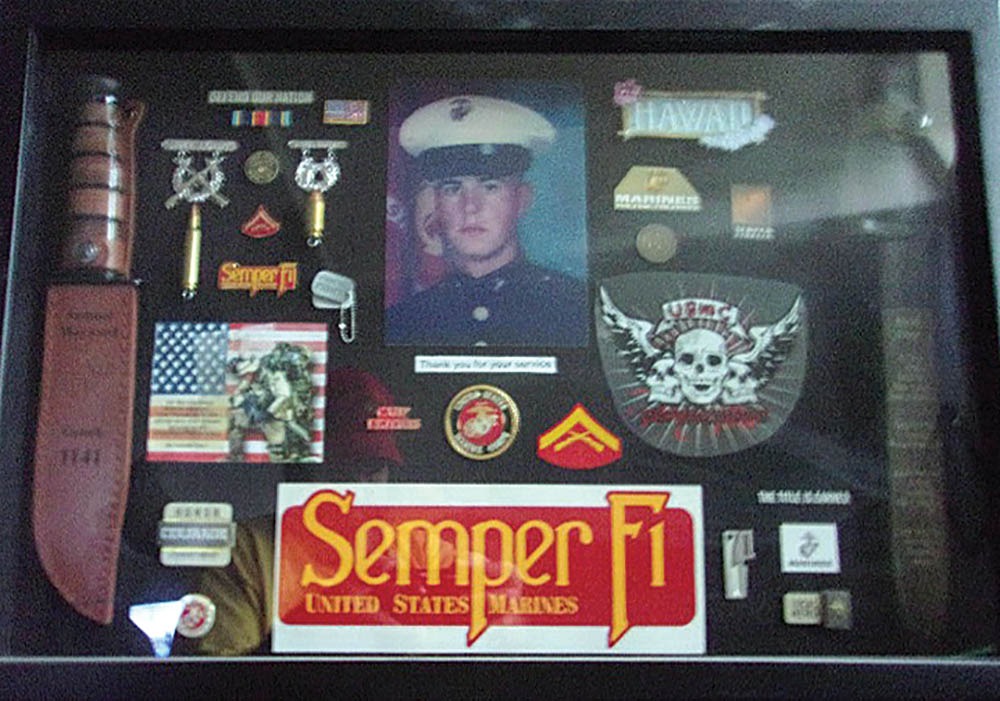 Despite facing health issues he believes are connected to the water contamination at Camp Lejeune, Sam Maynard takes great pride in having served in the Marines. A shadowbox of mementos from his time in service is displayed prominently in his home.

Author’s bio: Beth Brown is a writer who has worked both as a staff reporter and independently. She is the daughter of a Marine, a veteran of the USCG and the spouse of an active-duty Coast Guardsman.