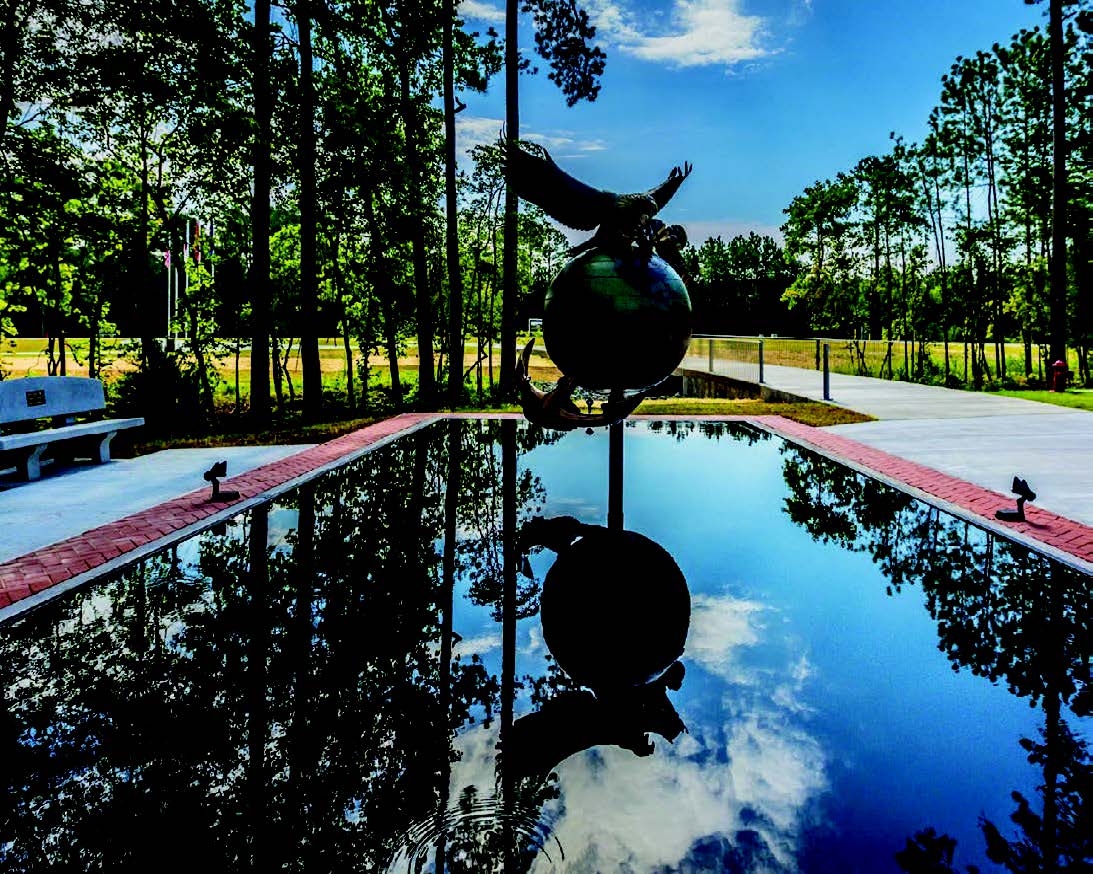 Carolina Museum of the Marine

Building a Firm Foundation for the Future 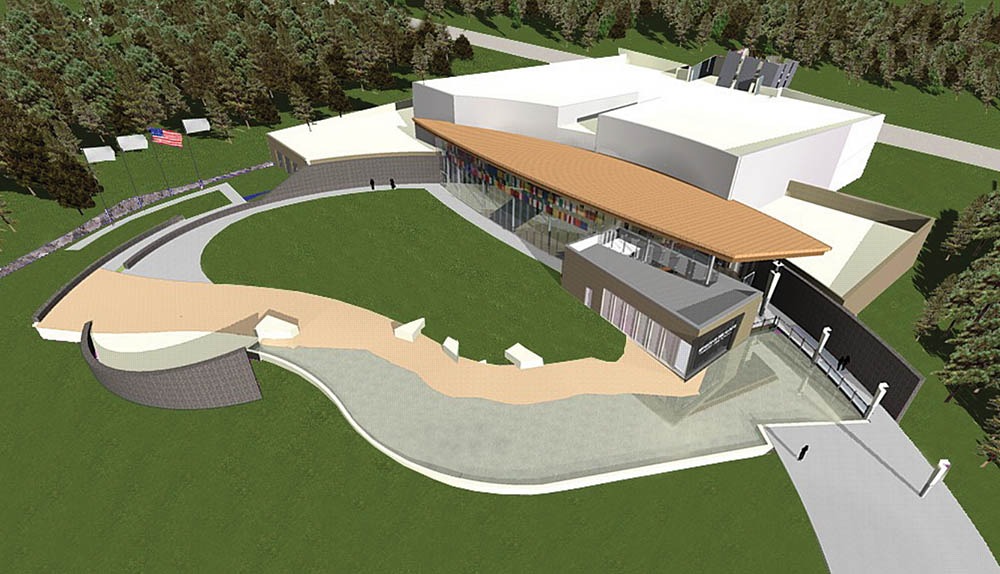 The mission of Carolina Museum of the Marine | Al Gray Civic Institute is to honor the legacy of Carolina Marines and Sailors, sustain the ideals that are the foundation of our nation, and inspire principle-committed citizens.

Originally named Marine Corps Museum of the Carolinas, the organization was founded by Major General Ray Smith, USMC (Ret) who was the commanding general for Marine Corps Base Camp Lejeune from 1997 to 1999. Smith and his wife, Colleen, wanted to preserve the storied legacy of Carolina Marines and Sailors so they contacted Sergeant Major Joe Houle just before his own retirement. “We wanted someone who understands the Carolina MAGTF,” MajGen Smith said. “And someone who would work tirelessly to make the vision of an enduring tribute a reality,” he added.

Houle joined the organization in 2000, wearing a number of hats over the years, all with the focus of building the museum. Now as Director of Operations and Artifacts, Houle works with Ashley Danielson, the Executive Director and Vice President of Development, and Richard Koeckert, the Finance Manager, overseeing the organization while a search for a chief executive officer is underway.

“Over the years we have been collecting artifacts for the museum’s exhibits,” Houle said. “Board members CWO-5 Lisa Potts, USMC (Ret) and SgtMaj Ray Mackey, USMC (Ret) have worked tirelessly with the organization’s historian, LtCol Lynn “Kim” Kimball, USMC (Ret), and museum archivist and volunteer Frances Hayden to ensure best practices in the accession and care of the artifacts,” he added.

Late in 2021, the state of North Carolina awarded $26 million to the organization for construction of the 40,000-square-foot facility. Local government entities are joining private donors to ensure that the organization has operating capital to oversee and run the project during construction and after its doors open. “We are excited to see this organization moving from grassroots to the national stage,” said Danielson. “We have numerous faithful supporters to which we owe a debt of gratitude.” 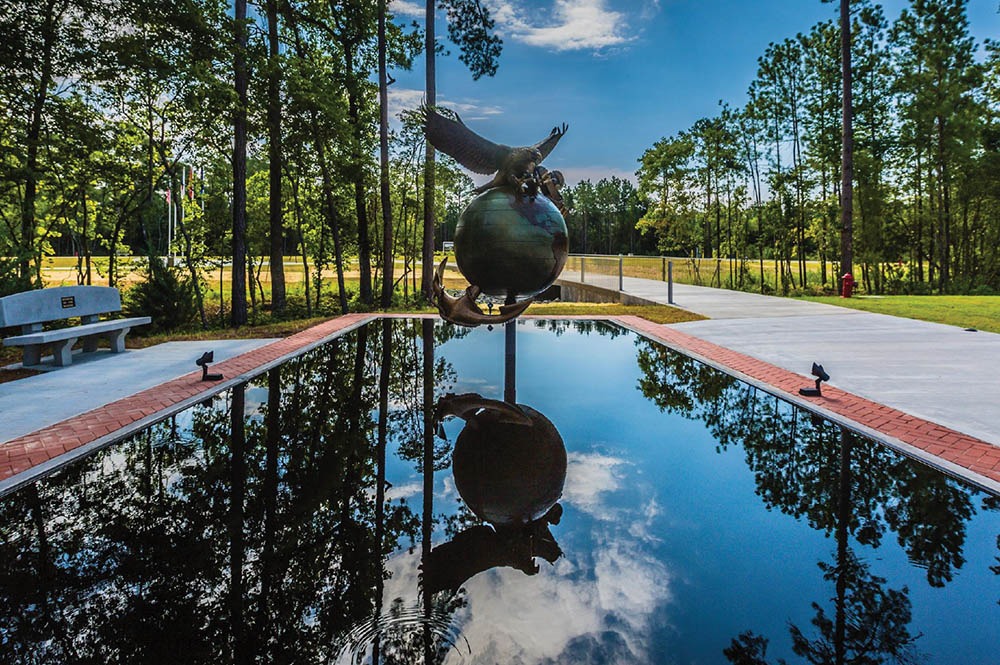 Reflection and Celebration Park, the first of the museum’s two phases, has become the site of numerous promotion and retirement ceremonies thanks in large part to its huge eagle, globe and anchor statue. (Photo courtesy of CJMW Architecture, Carolina Museum of the Marine | Al Gray Civic Institute)

The museum will highlight the many ac-complishments and innovations of Carolina Marines and Sailors and the enduring contributions of their host communities. It will also provide a unique and inspiring new venue for public and private events including military balls, reunions, promotion and retirement ceremonies, weddings and civic events. 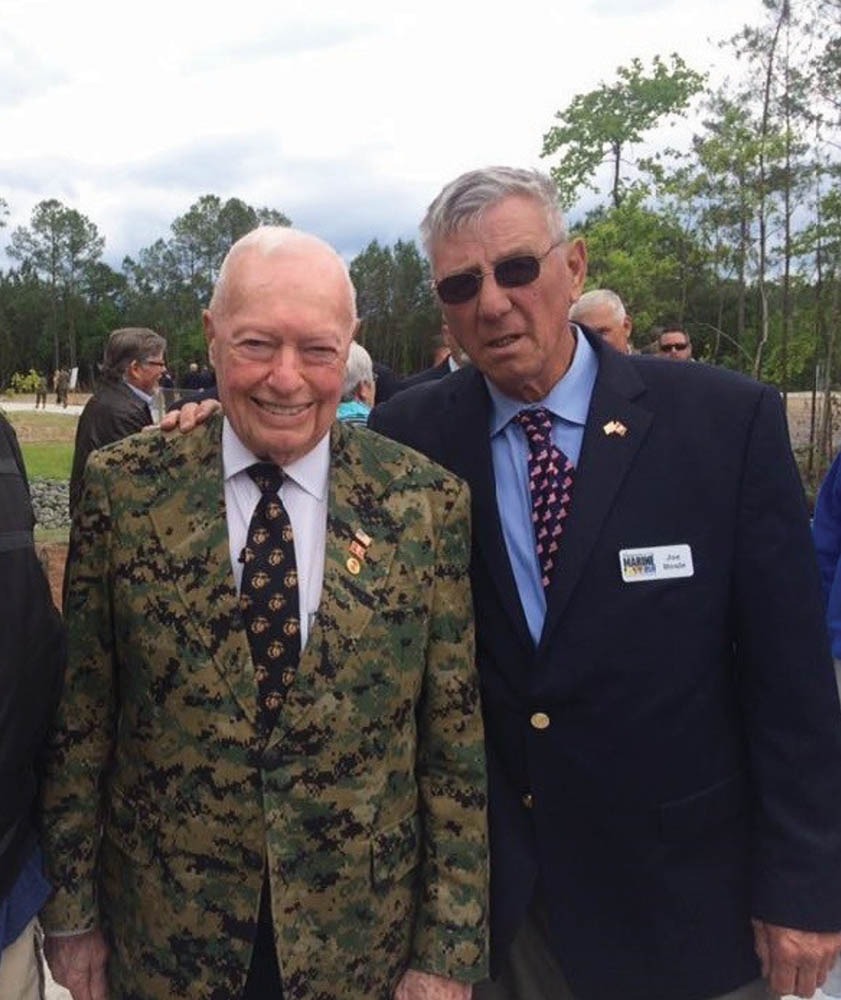 The museum’s plans have stayed the course since 2000 with award-winning architectural and engineering plans already in place. “We are building in two phases,” Vercauteren said. “Phase One, Reflection and Celebration Park, was opened to the public in May 2016 and gifted to the Department of the Navy in 2018.” According to Onslow County Assistant Manager Glenn Hargett, Reflection and Celebration Park is the most “Instagrammed” site in the community. Hundreds of people—military personnel and civilians—use the park and its world’s largest eagle, globe and anchor statue as the site of promotion and retirement ceremonies, weddings and photo opportunities. Recently, thanks to gifts from Byrd Family Foundation, Patriots Walkway was dedicated at the site.

“Plans for Phase 2, the construction of the 40,000-square-foot Museum and Institute, are now underway,” Vercauteren said, adding that a Marine veteran legislator was instrumental in backing the project. “Thanks to dedicated North Carolina Senator Mike Lazzara and his success in obtaining a $26 million construction grant this year.” Lazzara was joined in his efforts by North Carolina state representatives George Cleveland, Pat McElfraft and Phil Shepard.

“We are excited to move forward with this project,” said SgtMaj Houle. “We will show quite clearly, with our immersive exhibits, the honor, courage and com­mitment of Carolina Marines and Sailors.” The museum will be located near Marine Corps Base Camp Lejeune and is anticipated to be a major attraction for the 138,000 Marines, Sailors and Coast Guardsmen serving in the area as well as their families and friends. Houle also expects numerous military and history aficionados as well as tourists to the state’s coastline to visit the museum. 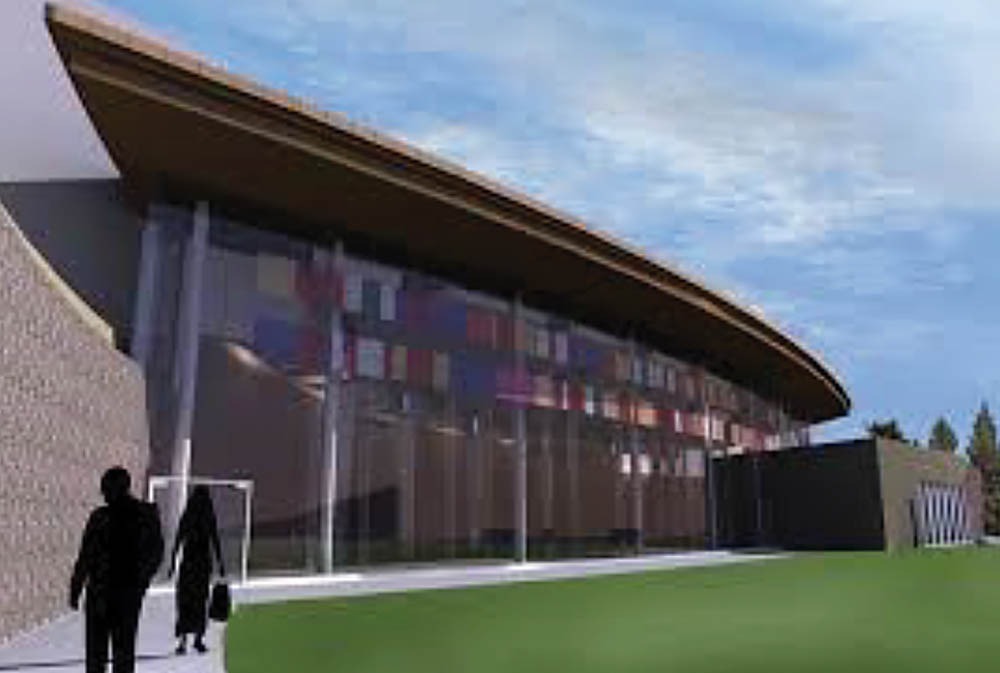 As with any project, the group has encountered headwinds and obstacles along the way, including very real questions about the efficacy of museums in the current milieu. “We knew we needed to look at our business model,” said Danielson. To do that, the group began talking to other museum leaders about what does and does not work. Danielson said that one of the most compelling conversations early in her tenure with the organization was with General Alfred M. Gray, USMC (Ret), the 29th Commandant of the Marine Corps.

“We spoke about the need to increase or even restore civics education in our nation,” she recalled. “General Gray has had in mind for a number of years an institute at which individuals of all ages can learn about the foundation of our nation, the core values of our founding fathers, and the principles of creative, critical, and strategic thinking that will lead to effective civic engagement.” The synergy between the core values of the Marine Corps and the characteristics of a good citizen made sense to the group, and plans began to create and launch the civic institute, now named for its founder, General Gray. The Al Gray Civic Institute will offer courses on site, online and on location. 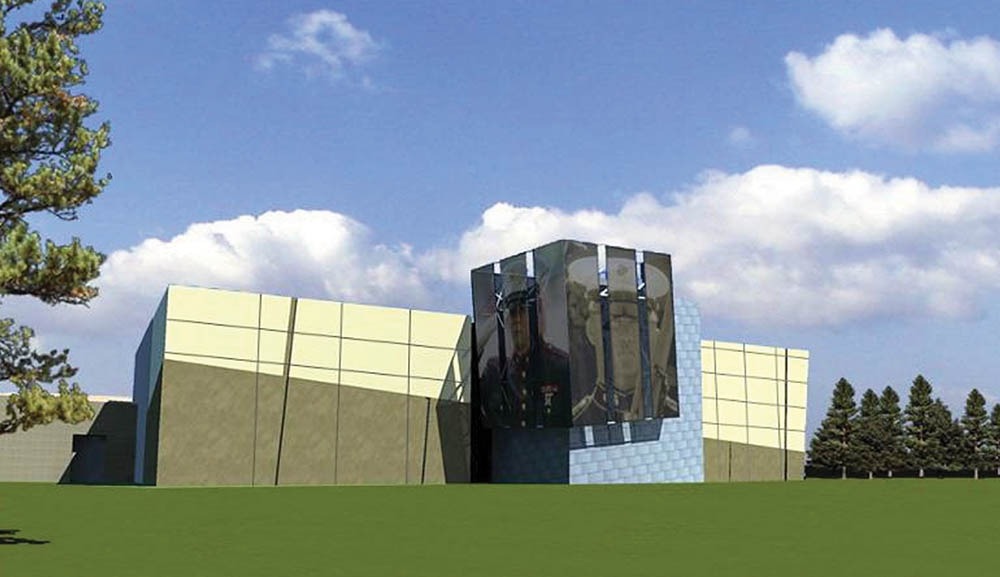 The rear of the museum, as shown in this artist’s rendering, will overlook the Route 17 bypass which runs through Jacksonville, N.C. (Photo courtesy of CJMW Architecture, Carolina Museum of the Marine | Al Gray Civic Institute)

Since 1775, the United States Marine Corps has been integral to the security of our country, and integral to its mission are honor, courage and commitment. Marines are inculcated with an understanding of honor and the qualities that define not just a well-formed Marine but a well-formed person and citizen. “Marines demonstrate civic commitment in action as they defend and protect our Constitution,” said General Gray. “We want to showcase their many innovations and accomplishments while teaching to students young and old a basic knowledge and understanding of our government and our individual responsibilities in preserving our democracy for future generations,” he continued.

With Gen Gray’s leadership, Board of Directors Vice Chair Mark Cramer, and ethics professor James Danielson, are overseeing development of the curriculum for the Al Gray Civic Institute. “Critical Thinking for Civic Engagement,” the Institute’s first offering, has been delivered at Swansboro High School in Swansboro, N.C. and at Camp Johnson to active-duty Marines awaiting MOS training. The 15-hour course is being adapted for online presentation as well. Other classes under development include, “The Founding Principles of the United States,” “Understanding the American Constitution,” “Critical Thinking for Civic Engagement,” “Leading Self, Leading Others,” “History of Political and Economic Thought” and “Ethics at Home, School and Work.” “The Houle School” is a summer fitness, civics and leadership program for middle and high school students. The Institute also produces essays in the organization’s monthly newsletter, “Front and Center.”

Gen Gray is especially interested in teaching critical thinking which he defines as the study and analysis of problems, issues and facts to develop and form a sound judgement. “It is self-directed, self-disciplined, self-motivated, and self-corrected thinking,” he said. “This course was already conducted at Swansboro High School in 2019 with excellent results. We want to be prepared to defend our convictions and interests as well as our institutions.” Gen Gray continued, “We don’t have to take sides concerning political or religious questions which may be in dispute in America. We can endeavor to state as simply as possible those great convictions upon which nearly all Americans agree. These are the simple principles as rules of life, beliefs that secure our order, our justice and our freedom.”

For more information and to follow the organization’s progress, visit Carolina Museum of the Marine | Al Gray Civic Institute’s website at MuseumoftheMarine.org. 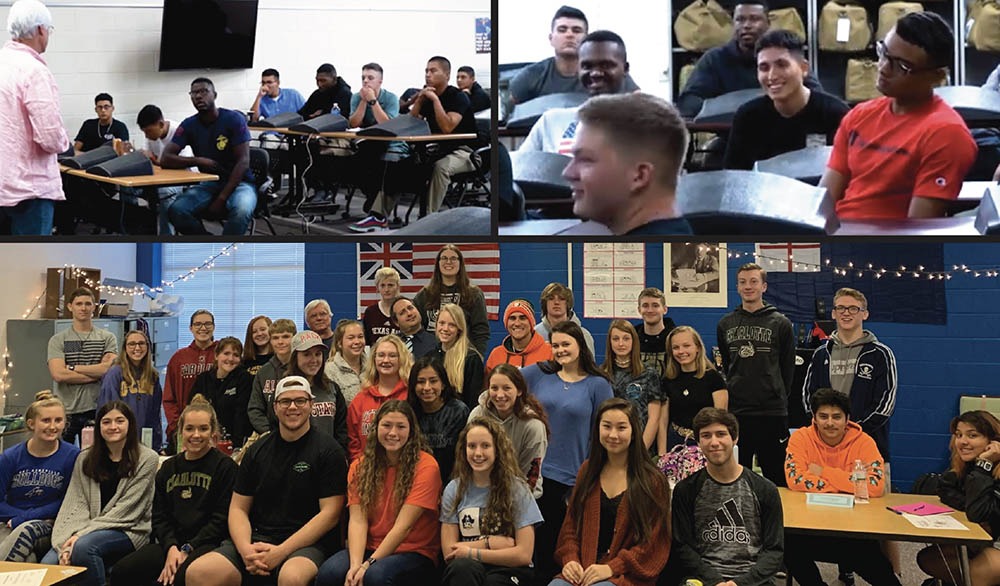 Author’s bio: Ashley Danielson is the executive director and vice president of development at Carolina Museum of the Marine | Al Gray Civic Institute in Jacksonville, N.C. She has worked in nonprofit management and philanthropy for more than 30 years and is married to a Marine veteran. 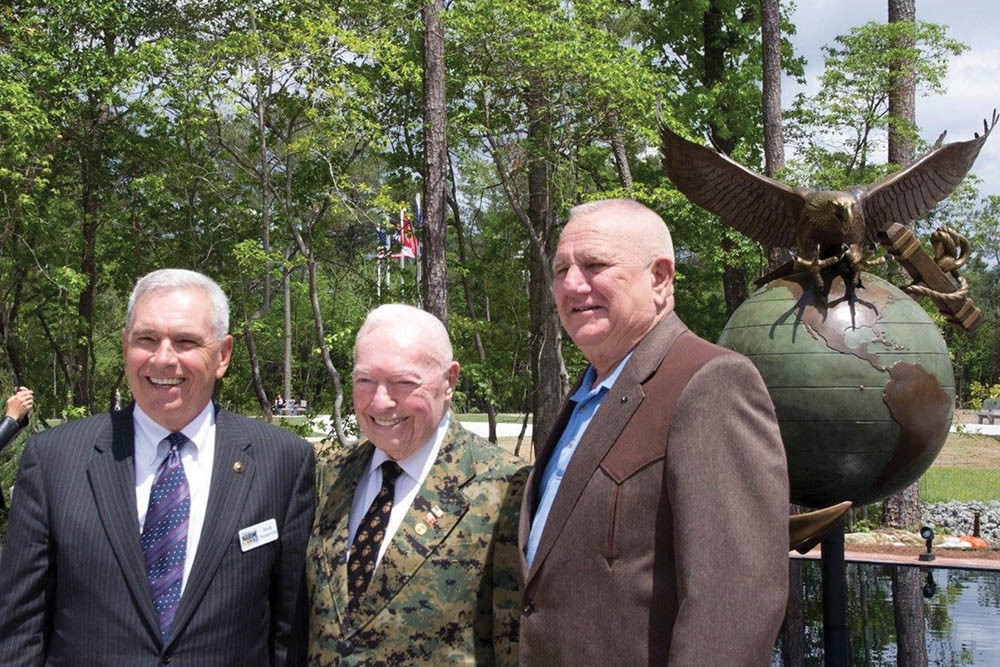