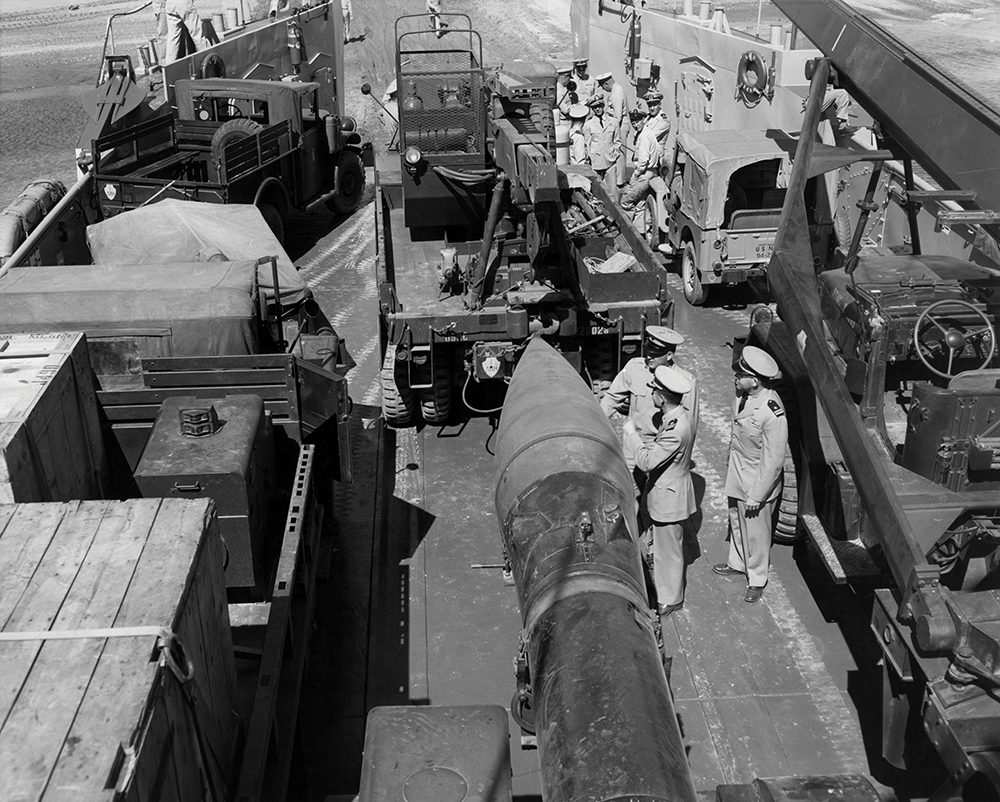 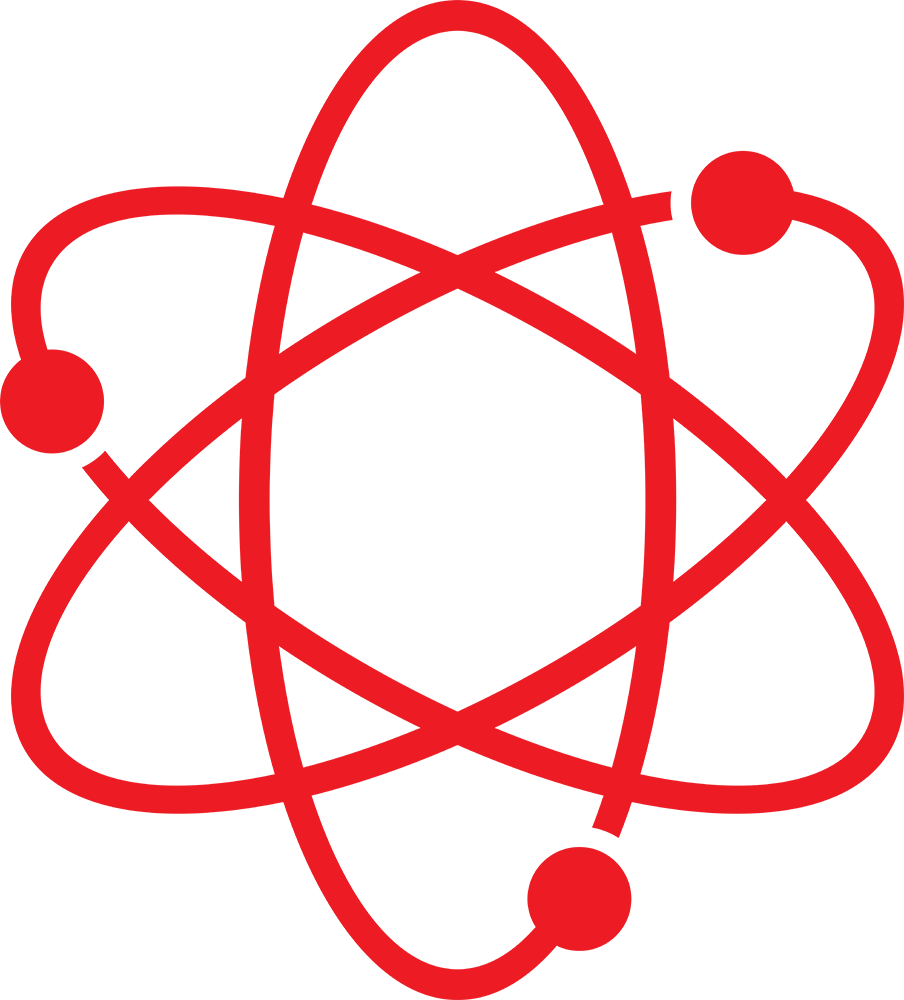 When atomic bombs were dropped on Hiroshima and Nagasaki in August 1945, they effectively ended World War II and ushered in a new era of warfare, but while the United States stood alone as a nuclear power for the first four years after the war, the Soviets detonated their own atomic bomb in 1949. From that point onward, the use of and defense against atomic weapons stood front and center of all U.S. military strategic planning.

For the Marine Corps, the ominous shadow of atomic warfare meant a reimagining of amphibious warfare. How were Marines supposed to come ashore and fight when a single atomic weapon had the potential to destroy an entire assault force before it even reached the beach? How would they counter potential nuclear-armed adversaries once ashore?

In a time of shrinking budgets and shrinking forces, the com­ing of the Atomic Age potentially threatened the very existence of the Marine Corps. The Marines lost 85 percent of total end strength between 1945 and 1950, dropping from a zenith of 474,680 Marines in 1946, to 155,679 the following year and ultimately down to a mere 74,279 by 1950. Ever living up to the adage of “adapt, improvise and overcome,” the Marine Corps had to reimagine how amphibious operations would be conducted in the Atomic Age in order to remain relevant. The National Defense Act of 1947 codified the Marine Corps’ role in protecting the nation into law and ensured its continued existence. From that point, the mission was no longer survival, but achieving and maintaining the cutting edge of American combat power in the postwar era.

The next war came sooner than many expected, and by the end of June 1950, U.S. forces were engaged in combat op­erations against North Korea. After setbacks and retreats through July and August 1950, the first amphibious assault to incorporate the lessons learned from the Bikini Atoll atomic tests landed the 1st Marine Division at Inchon on Sept. 15. Speed, dispersal, timing and surprise were key in getting the Marines ashore, with the 3rd Battalion, 5th Marines landing at 6:30 a.m. and securing the approaches to Inchon, enabling the rest of the Division to land later that afternoon.

The Inchon landings showed that while the primary atomic threat to a landing force was still from an air delivered weapon and that air superiority was critical for the ground force to maintain freedom of movement, the potential of tactical nuclear weapons employment lay just over the horizon. By December of that year, the Army’s missile research and development programs kicked into overdrive with one of several goals being the production of a surface-to-surface tactical nuclear weapon to enable American ground forces to attack and destroy potential origin points of an enemy tactical atomic attack.

Development of tactical nuclear weapons took a two-pronged ap­proach, focusing on rocket and gun systems as the delivery method. War in Korea had increased the potential for nuclear conflict, and if there was a chance of a third world war, the Department of Defense wanted to be prepared to fight on the atomic battlefield. As a result, both the gun and rocket systems were given emer­gency priority with prototypes planned for delivery by mid-1951. 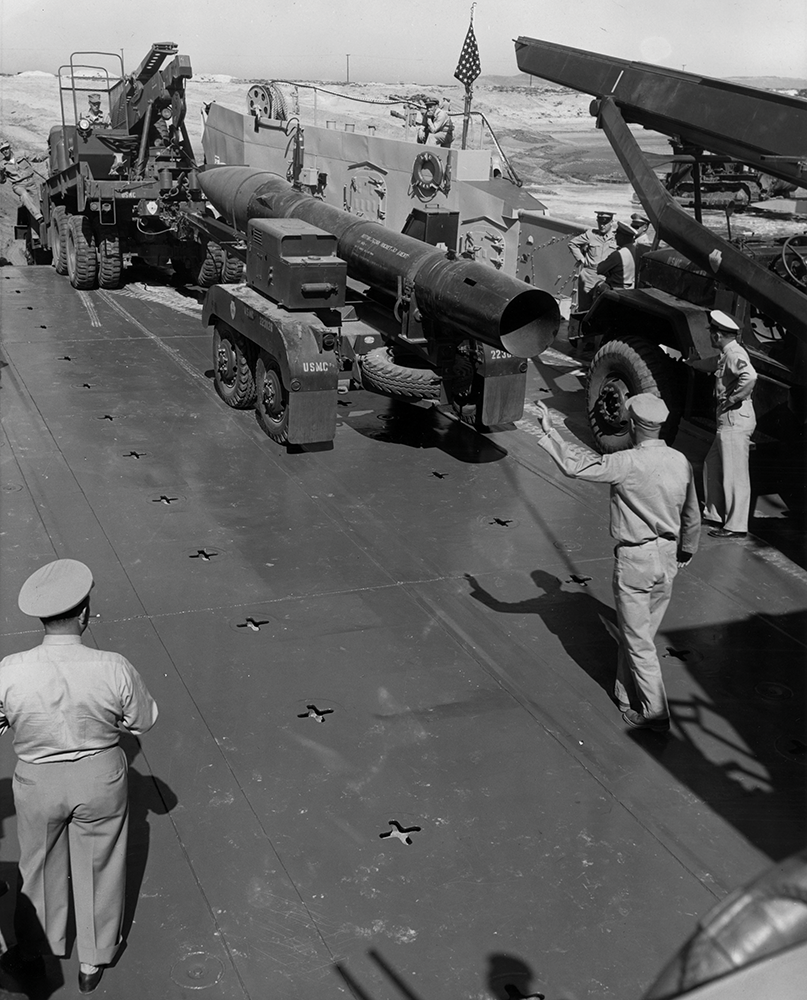 The platoon’s 5-ton wrecker also served as the prime mover for the reload rocket. This allowed the wrecker crew to quickly hoist the second rocket onto the launcher for rapid reloading.

Nearly from its inception, the rocket program was intended to result in a mobile, flexible system that would allow for a quick “shoot and scoot” capability; a weapon that would fit in well with an amphibious assault force. Coming ashore via LCU or LST, the launcher and support equipment could quickly be landed, driven to a feasible launch site, and emplaced. The launcher was based on the M139C 5-ton truck, which had the load carrying and off-road capability needed to properly employ the rocket. It was standardized in 1953 as the M289 transporter/launcher.

The Douglas Aircraft Company completed the first five XM31 prototype rockets, nicknamed “Honest John,” by May 1951 and the test program began at the end of June, with the first launch on May 29. The program progressed steadily with modifications and improvements to the rocket and launcher over the subsequent two years. In addition to rocket modifications, the program also developed blast and fragmentation high explosive (HE) warheads, and a chemical/biological capable warhead as well. 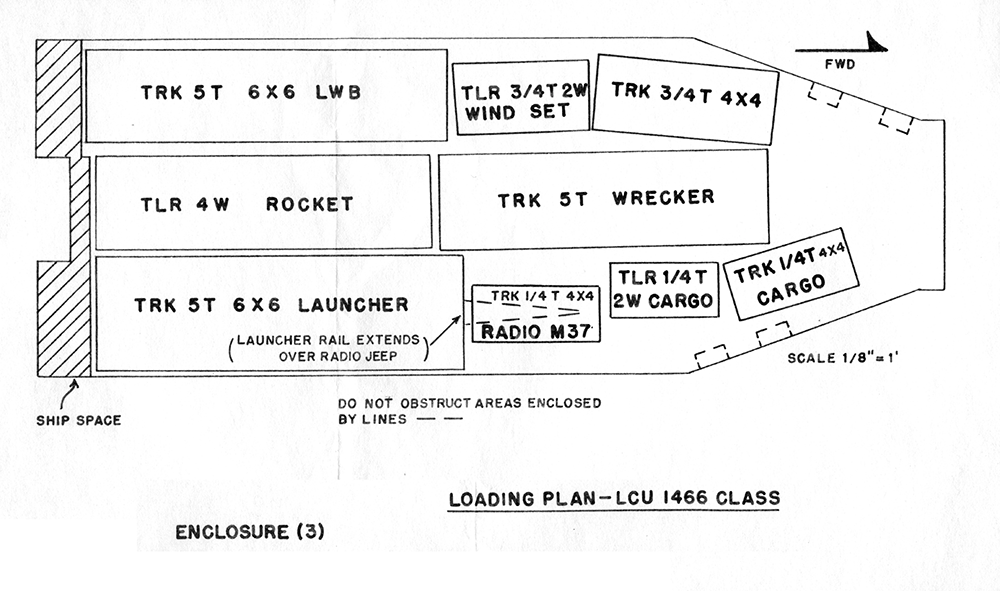 While the atomic tests at Bikini Atoll in 1946 made it clear that a nuclear weapon employed against an amphibious assault force had catastrophic potential, the Corps quickly began looking at how to change its doctrine in order to adapt to the new status quo. Its first doctrinal push to acknowledge nuclear weapons was Landing Forces Bulletin (LFB) 2, issued on Feb. 20, 1953, titled “Interim Doctrine for the Conduct of Tactical Atomic Warfare.”

However, it was the 1955 revision of LFB-2 that laid out the framework for Marine Corps atomic doctrine by stating that the Marine Corps would be “tailored to conduct operations against an enemy employing atomic munitions” and would furthermore be “organized, trained and equipped to employ atomic munitions in amphibious or other operations,” with “control of the employment of atomic munitions … decentralized at the lowest echelon possible.”

This doctrinal update coincided with the arrival of the Marine Corps’ six M289 launchers and associated equipment and the standing up of the 1st Heavy Artillery Rocket Battery (HARB), FMF at Camp Lejeune. The six launchers had been appropriated for in October 1954 as part of the Army’s first follow-up purchase after the initial production run. The first Marine M289 launcher arrived in June 1955, with the balance of launchers, rockets and equipment arriving in August. The Fleet Marine Force was almost nuclear capable.

From LFB-2, it was clear that the Marine Corps intended to conduct amphibious landings and fight within a battlefield that had already been heavily prepped by atomic munitions. “An intensive atomic preparation of the objective area will be conducted immediately prior to the assault” pulls no punches as to the environment that the Marines were supposed to fight and survive within. Coming ashore with additional atomic weapons would ensure that enemy forces outside the prepared area and several miles inland could not serve as rally points for enemy reinforcements or survivors from the initial atomic preparation.

The Heavy Artillery Rocket Battery was designed to maximize its effectiveness under this doctrine. The battery was further subdivided into two platoons of two launchers and the requisite support equipment to maintain both as mission capable. The 1st HARB moved to Coronado, Calif., later in the year, and by mid-May had conducted a series of tests to identify minimum operational loads for both LCU and LST-class landing craft. They also determined the proper dispersal to ensure the survivability of at least one firing unit within an assault force. The dispersal between those firing units effectively relegated the final decision for the use of atomic weapons to the section chief, an E-6, per guidance from LFB-2. 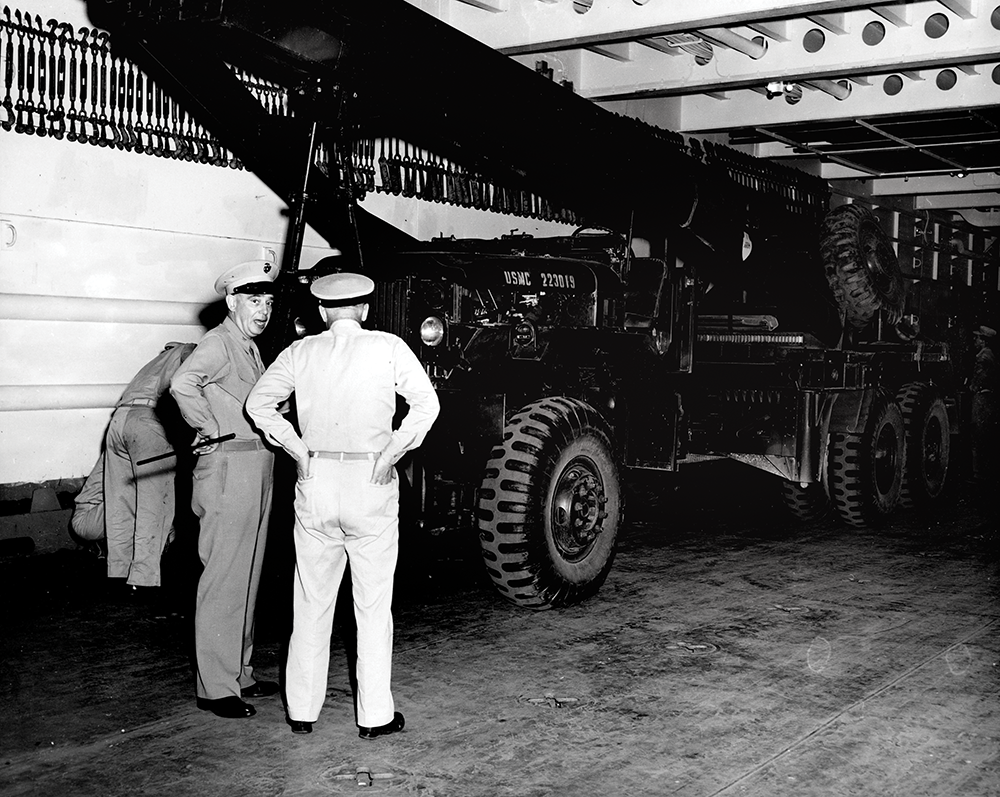 Although it was supposed to fit aboard an LST, the overhead in the ship’s well deck prohibited the launcher vehicle from carrying a rocket. In fact, the launcher rail frame required modification for just the vehicle to fit with enough clearance.

Once declared operational, the 1st HARB was assigned to the Field Artillery Group, under Colonel M.J. Hooper at Twentynine Palms, Calif., conducting their first field exercise as part of the Group in February 1958, using the XM4 flash/smoke practice rocket for live fire training.

The battery deployed to Okinawa in 1960 for an 18-month tour of duty, joining U.S. Army Honest John units already there. Okinawa was and continues to be critical to the U.S. presence in Asia and served as a significant “special weapons” logistics center for all of the services through 1972. Were tensions to boil over in South Vietnam or with China, the 1st HARB was prepared to jump off from Okinawa to wherever necessary.

The 1st HARB was finally disbanded in 1965 after the decision was made not to upgrade to the M50 improved Honest John rocket. While the principles behind the doctrine of medium range, medium yield atomic weapons were sound in theory, the practical survivability concerns became all too apparent. As the Cold War dragged on, newer, more efficient methods of nuclear weapons delivery ensured that the Marines would be able to continue with their historic mission of assault from the sea, while no longer needing to maintain an atomic force to hold the door open once they were secure on land.

The Honest John rocket and launcher failed to reach initial operational capability during the Korean War, but the concerns of a wider war spurred its development and gave the Marine Corps a tactical nuclear platform with which to defend an amphibious landing force from atomic attack. This nuclear amphibious landing capability, however small within the Corps, allowed for a far more capable Fleet Marine Force in the decade between 1955 and 1965. Aerial and artillery tube-delivered nuclear weapons outpaced the Marines’ need for a surface-to-surface rocket propelled nuclear deterrent, but allowed the Marine Corps to remain a relevant and significant nuclear deterrent force in its own right throughout the remainder of the Cold War.
Author’s bio: Jonathan Bernstein is the Arms and Armor Curator for the National Museum of the Marine Corps. Previously he was the Director/Curator of the Air Defense Artillery Museum. Bernstein began his museum career in 1991 at the USS Intrepid Sea Air & Space Museum and has served in a number of museum roles since then. He was an Army aviation officer, flying AH-64A and D Apache attack helicopters with the 1-104th Attack Reconnaissance Battalion, PA NG from 2006-2012. He has also published a number of books and articles on military and aviation history. 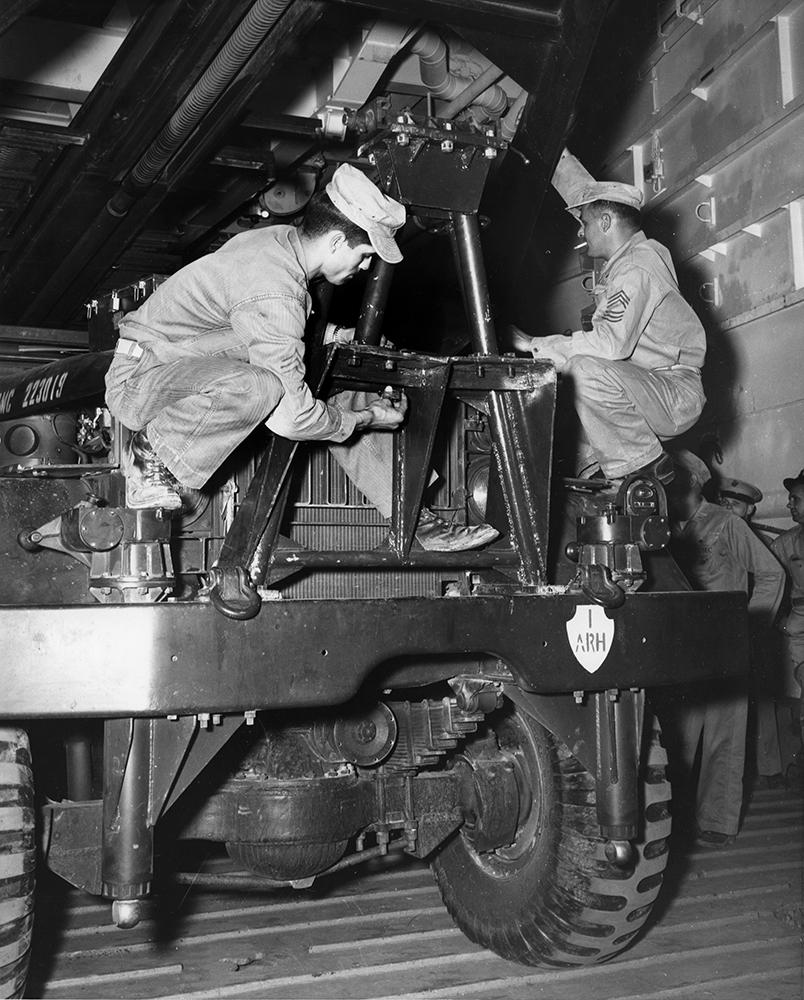 Members of the launcher crew lower the launch rail to ensure overhead clearance aboard an LST.