I was once asked to teach a handful of junior leaders some aspects of military operations on urbanized terrain. Time constraints and lack of training areas and units to lead made me want to try out something a Danish colleague once described that the Danes call “the tactical trainer.” I believe that the tactical trainer is something Marines will find helpful in developing tactical decisionmaking skills and learning tactics.

An umpire is appointed to prepare the maps, one of which is distributed to each participant on each side. A commander is designated for friendly forces and given a mission and a radio. Subunit leaders are appointed and also given a radio each. Friendly forces then make a plan within a given time limit. The same procedure applies to the opposing side. Depending on the size of the enemy unit, the leader of the opposing forces may or may not have subunits to command. A third party may also be involved, playing a neutral side. The umpire checks out the plans for all sides and marks all deployments on his own map. The umpire must appreciate which success criteria will apply to both sides. The players are placed in such a way that they cannot hear each other by voice or see the umpire map. Face-to-face communications between participants will only be allowed if the units in question are at the same location on the map.

The umpire keeps track of all unit movements on his map in accordance with orders and plans. He also decides when units can observe each other and referees the outcome of contacts. When a unit makes an observation or is fired upon, the units in question are called to the umpire’s map and informed about the incident. For example, the leader of 2d Squad is told, “As you deploy to Building 19, you see two men in civilian clothes armed with Kalashnikovs run from this point to that point.” (The umpire points to Buildings 21 and 22.) “What do you do?” The squad leader then has to choose a course of action and send any messages on the radio. When informing participants about what they encounter, photographs may also be used in place of verbal descriptions. (“What you see in this photo just moved from this building to that building.”)

The umpire ends the scenario when one of the sides has achieved a decisive result. He then leads an after-action review where all parties reveal their plans with rationales and go through the sequence of events. Last but not least, lessons learned are concluded. 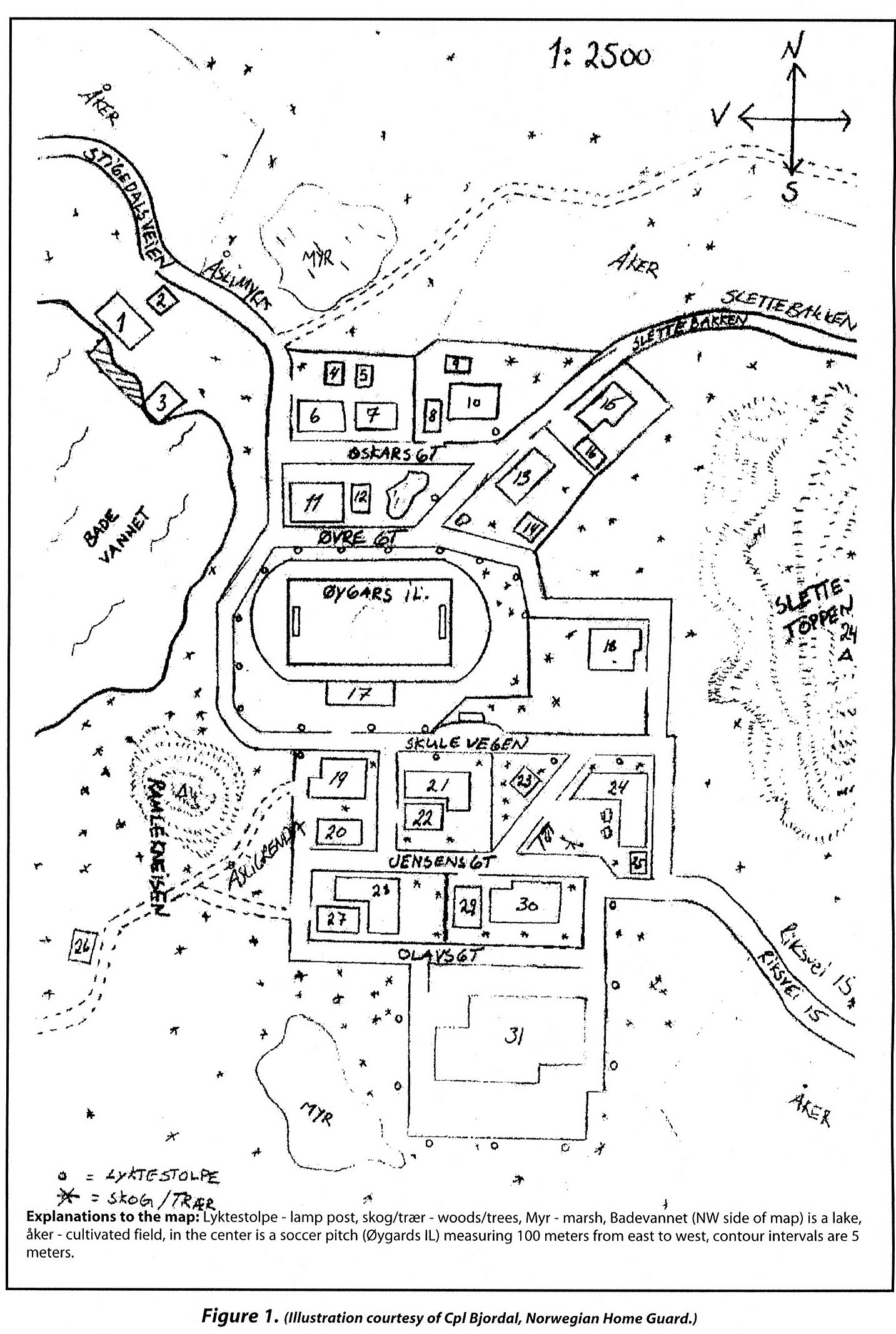 Use the map in Figure 1 showing an abandoned industrial area. All buildings are made of concrete, have two floors, and have doors and windows facing all directions. It is 1200. The sun goes down at 1900.

Situation. You command 1st Platoon, Company A. Your company is securing an airfield against a terrorist threat. Your platoon is currently the company quick reaction force and is mounted on HMMWVs. You are located 3 kilometers south of the map and may enter the map from any direction.

Orders to the Marine forces. The company commander gives you the following orders:

“A tipoff has revealed that two terrorists are hiding in the abandoned industrial area. They have a portable surface-to-air missile and intend to shoot down friendly aircraft. Civilians often loiter in the industrial area as it is not fenced in.

“You have a sniper team attached. Your mission is to apprehend or neutralize the terrorists in order to make it possible to reopen the airfield to air traffic as quickly as possible.”

Orders to the opposing force. “You lead a group of four people. Each of you has civilian clothes, an MP5 submachinegun, night vision goggles, binoculars, and a radio. Also at your disposal are a black van and a motorcycle. You are currently in Building 21 (safe house) guarding two portable surface-to-air missiles (Stingers). At 2100 an agent will arrive to pick up the Stingers in preparation for a strike. You must guard the missiles until then. A Marine unit of unknown size is guarding the airfield 3 kilometers to your south. Their most dangerous course of action is to mount patrols to your area. Plan guard duty and actions on contact.”

Orders to the neutral side. “Deploy the following on the map and where applicable plan their movements: three buddies taking a stroll, a motorcyclist going from south to north, a person walking his dog, a vagrant searching for things of value, six; children playing soccer, and three; car wrecks.”

The tactical trainer is a good training technique because it requires participants to take an active part by making decisions, sending messages, and giving orders. Participants must formulate clear and concise descriptions of events in order to give friendly forces situational awareness. I have noticed a significant improvement in the quality of reporting during tactical trainer participation. A colleague explained that during a field training exercise. where a unit he was part of was required to cordon and search an area, he felt as if he had done it before because of a tactical trainer session. Its competitiveness is also motivating. Most soldiers enjoy the opportunity to outwit the opponents and will do their best. It is a way to “spice up” your tactical decision games, making them more demanding. Not only must you make a plan, you must also execute it while facing the friction and fog of war that will result from it being two-sided and free play.

Naturally, these sessions are no substitute for training with proper units, but they are a good warmup exercise for Marine leaders before taking charge of men in the field.