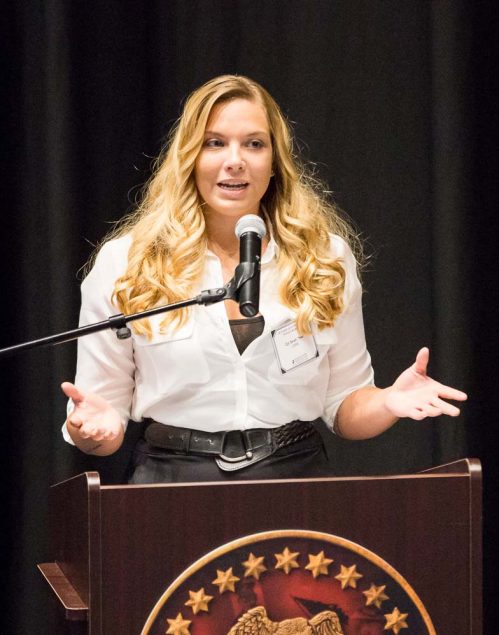 Greetings Marines and Friends of the Corps,

This Marine Corps Association Foundation newsletter contains stories and testimonials of how your generous contributions continue to make a significant difference in the professional development of Today’s Marines. As we celebrate our tenth anniversary of supporting Marines, we are also celebrating a new Commandant of the Marine Corps. In July General David H. Berger received the battle colors of the Marine Corps at a passage of command ceremony at historic Marine Barracks Washington. General Berger personally knows how much the Marine Corps Association Foundation does for Today’s Marines. He has been a supporter and during his many years of service has seen his Marines benefit from our programs. Accordingly, your support has never been more important as we continue to advance the Commandant’s priority of training and education, and the self-improvement of Marines.

These are exciting times for our Corps and for your Marine Corps Association Foundation. Colonel Tim Mundy, our Foundation’s director, and I remain thankful to be on your team and eternally grateful for your continued contributions.

A Decade of Supporting Today’s Marines

Gen Paxton’s comments were followed by two corporals who were winners of Marine Corps Association Foundation sponsored professional military education competitions. Corporal Sarah Thee, an ordnance maintenance Marine stationed at Quantico, explained how participating in her battalion’s PME competition on the Battle of Tarawa enhanced her interest in the Corps’ history.

We also recognized donors, Dr. Susan Johnston, who has given faithfully for all 10 years of the Foundation’s existence, Mr. Burton “Skip” Sack and his wife Gail, and LtCol (Ret) Ronald Eckert and his wife Kathie. We are indebted to them, but also to the thousands of others who give consistently because they care about the Marines serving our nation. Please give today so the Marine Corps Association Foundation can do even more for the professional development of Marines in our next decade. Thank you!

“General Lejeune founded the Marine Corps Association [and] said we have to have a professional organization, we have to have something that will disseminate the history of the Corps, enrich the education for our Marines, and talk about the value of the Corps to our nation.”

“The more research we did, and saw what exactly these Marines went through… Tarawa is such a small place but with such a big impact. Because of this competition, I’ve continued to look further. I’ve read several books since then on Tarawa.”

“Lead Your Way to Tarawa” PME

For the second year in a row, Headquarters and Service Battalion, Marine Corps Base Quantico held a team competition for the battalion’s Marines. Each team, comprised of an officer, SNCO, and junior Marines wrote a paper and delivered a presentation on the battle of Tarawa to a committee of judges. The winners flew to Tarawa in July and walked the battlefield and discussed the valor of individual Marines as they fought to ensure victory in the Pacific. They also met with History Flight archaeologists who are locating and exhuming the remains of fallen Marines buried on Tarawa.

This once-in-a-lifetime professional development experience was only possible because of your support of the Marine Corps Association Foundation.

“The ability to see where the battle took place, the aftermath of the battle, and the relics that are left behind is truly remarkable and something that every Marine should experience.”

“As I stared out at the Japanese fields of fire and imagined the Marines taking the beachhead, I remember asking Gunny Smith, ‘How the hell did we take this island?’ He looked back at me and said, ‘I have no idea, Sir.’ I couldn’t help but to imagine the chaos, the smell, and the blood that was spilled at this very same spot 75 years ago.”

“When we walked into the History Flight lab, the first thing you see is a wall of faces staring back at you. They are the faces of Marines and Sailors that paid the ultimate price on that island. Some of them had already been found, some of them were still waiting their turn. Some of the pictures had descriptions on them such as, ‘Gunshot wound to head,’ and ‘Three month old daughter.’ It was a truly humbling experience and one I will never forget.”

Your Support to Today’s Marines Makes a Difference

The Marine Corps Association Foundation programs are in high demand across the Corps. Our excellence awards, from the Chesty Puller Award for honor graduates at Boot Camp to our recognition of outstanding performance by Marines in a variety of military occupational specialties including acquisition, logistics, and combat arms, are especially popular. We also recognize critical writing skills and innovative thought that are helping shape the future of our Corps through our writing awards. In addition, our Unit Library Program puts the books that our Commandant, General David H. Berger, prescribes for every Marine to read for their professional development in the hands of Marines around the globe.

Units are becoming more creative and innovative in their approach to the professional development of their Marines. Recently, the Marine Corps Association Foundation funded a seminar led by August Cole, co-author of Ghost Fleet, for the Marines in Okinawa. Mr. Cole worked with Marines from the III Marine Expeditionary Force Information Group and gave presentations on trends in the future operating environment and the role of fictional intelligence, and also led writing workshops. The event sparked lively debate and questions regarding the role of technology and innovation. “I hadn’t thought about fiction and the creative process in terms of helping us frame the way we man, train, and equip,” said one senior officer.

The dedicated staff of MCAF stands by to assist both individual Marines and units throughout the Corps in enhancing their professional development. From providing books from the Commandant’s Professional Reading List to deploying units to encouraging young enlisted Marines to submit essays for the Leatherneck Writing Contest, our staff is here to ensure support to Today’s Marines is always available thanks to our generous donors.