Reliance on artificial intelligence to make decisions could result in the Marine Corps’ institutionalization of attrition warfare. A case for this is shown in Destination Unknown’s “A Matter of Instinct,” written by Major Timothy Riemann. While the concept of AI is often one of an independent, ever-learning computer mind, it often looks more akin to a tool that still requires some level of input by the user. Riemann’s AI is no exception. 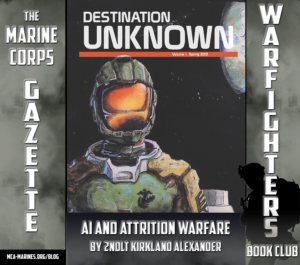 “As per the Department of War (DOW)—previously Department of Defense, changed after the 2061 Japanese War—protocol, Major General Campbell’s staff of AI Marines have input all necessary data to conduct earnest calculations to secure Jingtong.” Destination Unknown, p. 29.
The AI (referred to as SAYTAIN) in did not effectively account for the moral or mental aspects of the enemy. The AI Marines input their best estimates of enemy strength and composition, and SAYTAIN returned with the probabilities of success and casualties for each course of action. However, General Campbell overrode the recommendation SAYTAIN provided because he had information about the mental and moral strength of the enemy that had not been considered in the calculations. His COA succeeded as SAYTAIN had predicted, but with far fewer casualties (as opposed to the recommended COA, which predicted a lower chance of success and less casualties than the first COA). It played the basic role of a ‘battle calculator,’ computing odds possibly based on numbers of troops and equipment, with adjustments and modifiers for terrain and weather. In other words, it was almost wholly focused on the physical aspect of warfare, with the goal of physically defeating the enemy. This is a defining characteristic of an attrition-based mindset.
Avoiding attrition warfare requires an AI that can account for an enemy force’s mental and moral strength. Many factors can contribute to this strength, and few could be easily quantified as the kind of ‘hard’ data typically used in computer programs. Such data will be more ‘soft,’ and as such is more difficult to communicate to a machine in a manner that will remain meaningful in varying situations. It could look like an analysis of a soldier’s training, upbringing, education, and how each plays a role in his or her mental and moral state of being. An enemy commander’s temperament would be just as important, as far as their aggressiveness or conservatism in a fight. Clearly there is no limit to what could be included, and those things already considered are very complex to begin with. It should also be considered how difficult it could be to obtain such data on each soldier. While much can be learned from mediums such as social media and published reports, Reimann’s story demonstrates the fallibility of using such data. The enemy general was publicly misrepresented to be a heroic warfighter, which almost resulted in the selection of a second-rate COA. History has demonstrated that some individuals punch far above their weight in contributing to the success their unit. Therefore, it is prudent to at least assess key personnel for mental and moral gaps and surfaces. A failure to wholly assess the strength and disposition of the enemy is a consideration for only the physical attributes.
AI driven tools could be useful for Marines. They can reduce workload and streamline routine issues, allowing attention to be focused on more important matters. However, care must be taken that Marines continue to think critically and formulate their own decisions, rather than simply accept solutions from the AI. The fight against complacency will be difficult but vital when it seems the AI is never wrong. Garbage input will result in garbage output, and an AI cannot currently process soft data effectively. Even when AI is unveiled on the battlefield, the enemy will still get a vote. Historically many battles have been decided by one force doing what the other least expects, and this seems unlikely to change if AI can be fooled by the data it receives. We must continue to synthesize both soft and hard data to develop COAs rooted in maneuver warfare. Continuation of the Destination Unknown series can assist in this effort, particularly in spreading knowledge and ideas otherwise contained in reports most Marines do not read. The short form of each story provides just enough hard data for the reader to combine with their own knowledge and soft data for reflective thought about where the Marine Corps is headed, and the challenges we may face.